Re: Introducing the TYCHOS

*
Dear all, I have just added this latest discovery of mine to Chapter 21 of my TYCHOS book (2nd Edition). 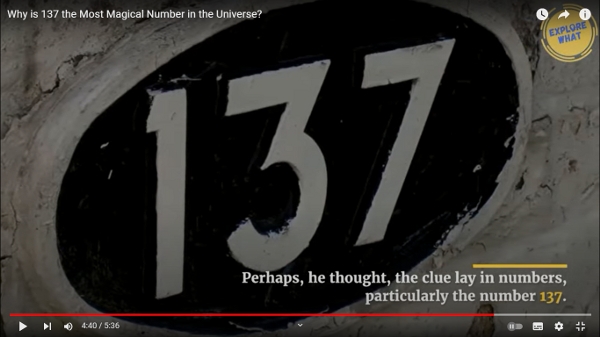 The Sun is empirically observed to oscillate (from east to west) by as many as 31.44 minutes in relation to an ideal / fixed / virtual meridian (or solar apex) - and consequently, in relation to our earthly clocks. We may thus say that the ‘mean solar apex oscillation’ amounts to 31.44min / 2 = 15.72min.

The number 137 preoccupied other great physicists as well, including the Nobel Prize winning Wolfgang Pauli (1900-1958) who was obsessed with it his whole life: “When I die my first question to the Devil will be: What is the meaning of the fine structure constant?” Pauli joked. Physicist Laurence Eaves, a professor at the University of Nottingham, thinks the number 137 would be the one you’d signal to the aliens to indicate that we have some measure of mastery over our planet and understand quantum mechanics. The aliens would know the number as well, especially if they developed advanced sciences.

Without going too deeply into nuclear physics, which is well beyond the scope of this book, suffice to remind the reader that electrons are believed to revolve at high speeds around an atom's nucleus (in 1912, Niels Bohr proposed his now-famous model of the atom, where the electrons orbit around the atomic nucleus "much like planets orbit the Sun"). Today, theoretical physicists refer to the perplexing, more recently-discovered 1/137 ratio as the "fine-structure constant α" (or the "coupling constant") of the electromagnetic force that binds atoms together.

"Perhaps the most intriguing of the dimensionless constants is the fine-structure constant α. It was first determined in 1916, when quantum theory was combined with relativity to account for details or ‘fine structure’ in the atomic spectrum of hydrogen. In the theory, α is the speed of the electron orbiting the hydrogen nucleus divided by c. It has the value 0.0072973525698, or almost exactly 1/137. Today, within quantum electrodynamics (the theory of how light and matter interact), α defines the strength of the electromagnetic force on an electron. This gives it a huge role. Along with gravity and the strong and weak nuclear forces, electromagnetism defines how the Universe works. But no one has yet explained the value 1/137, a number with no obvious antecedents or meaningful links."
"LIGHT DAWNS" - by Sidney Perkowitz (2015) https://aeon.co/essays/why-is-the-speed ... d-of-light

The "magic" 137 number is also described as a constant related to an electron's magnetic moment, or the "torque" that it experiences in a magnetic field. In the TYCHOS, of course, the Sun could be considered as the "electron" that revolves at high speed around the spinning "nucleus"(i.e. the Earth). As we saw above, **_for every diurnal rotation of the Earth, the Sun moves by a distance corresponding to 1/137th of the circumference of the Earth's inner PVP orbit._** Could this Sun-Earth 1/137-relationship (exhibited in the TYCHOS model) be purely coincidental? Or may it perhaps help elucidate and demystify this major riddle that has our world's theoretical physicists obsessively scratching their heads? 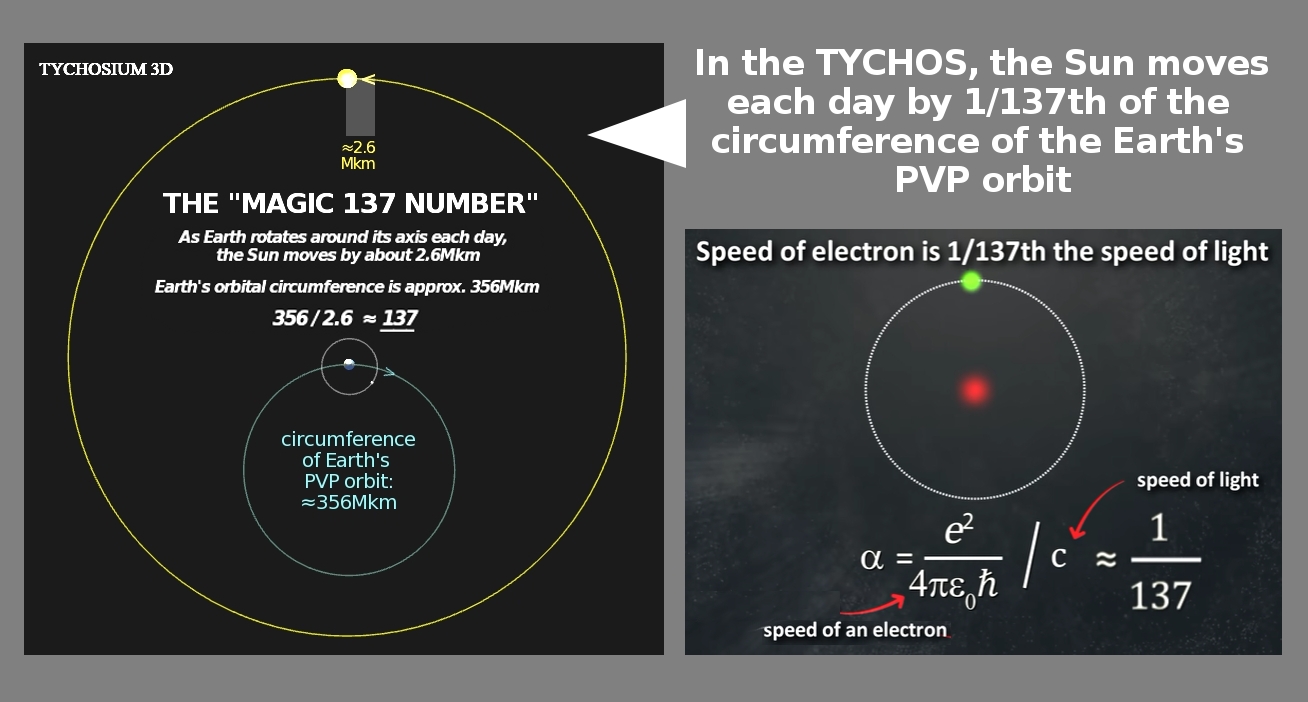 Dulcis in fundo, we then have this quote by John K. Webb (of the University of New South Wales, Australia), arguably the world’s foremost researcher of the mysterious 137 number, a.k.a. the ‘fine-structure constant Alpha’: “There’s something stange going on… a spatial variation… because when we look in one direction of the Universe we see Alpha being a little bit smaller - and when we look in exactly the opposite direction it’s a little bit bigger.” Source: "Is Our Entire Universe Held Together By One Mysterious Number?"

In another speech, John K. Webb further muses about the ‘strange issue’ of the observed, opposed variations of the constant Alpha. He explains that the two sets of data he studies are collected by two of the world’s largest observatories (the Keck Observatory in Hawaii and the VLT in Chile), located practically on the opposite sides of our planet: “Using the Keck telescope, it seems as if Alpha decreases, while using the VLT, it seems as if Alpha increases. Very strange…” The TYCHOS model offers, of course, the simplest imaginable explanation for this ‘strange phenomenon’: since the Earth is slowly proceeding at 1mph along its PVP orbit (along a virtually straight line), the stars “to our left” will seem to move in the opposite direction of the stars “to our right”! This is also why the stars exhibit both ‘positive’ and ‘negative’ parallax - as will be thoroughly expounded and illustrated in Chapter 25. But the best is yet to come - with regards to professor Webb’s most rigorous and exacting research:

As we can read in the Wikipedia’s “Fine-Structure Constant” entry, John K. Webb’s first - and groundbreaking - findings (published in 1999) reported a minuscule variation of the Alpha constant ("In 1999, a team led by John K. Webb of the University of New South Wales claimed the first detection of a variation in α.") Now, this variation amounted to about “0.0000057” (of the 137 value).

Good Heavens! As you may recall from Chapter 11, in the TYCHOS model, the Earth moves each day by 38.428km!

Hmm… Could the tiny ‘Alpha variation’ that John K. Webb detected possibly be related to the Earth’s diurnal motion?

In conclusion, as assessed within the TYCHOS paradigm, the “1/137 fine-structure constant Alpha” would seem to ‘reflect’ the daily motion of the Sun (in relation to the “nucleus / or magnetic field of opposed polarity” represented by the Earth’s orbital path), while its tiny variation appears to ‘reflect’ the daily motion of the Earth itself. Could all of this just be purely coincidental? The chances for this being the case, I would venture to say, are rather slim.

As I like to say, the TYCHOS is here to stay.

Re: Introducing the TYCHOS

Amazingly enough, the Tychosium simulator shows the Sun moving across space just like has been determined by centuries of observations and calculations which seeked to determine the Sun’s so-called apex and antapex.

Well, this would be in most excellent accordance with the TYCHOS model - which has the Sun moving precisely in such manner. My below graphic illustrates that, in the TYCHOS, the Sun would indeed (over a 12672-year period, i.e. half a TYCHOS Great Year) be MOVING AWAY from RA:6h28m - and MOVING TOWARDS RA:18h28m. In this respect, the TYCHOS model fully agrees with the observed / computed spatial progression and direction of the Sun's motion - from its antapex to its apex. Et sic probatio (or, if you will, Q.E.D.): 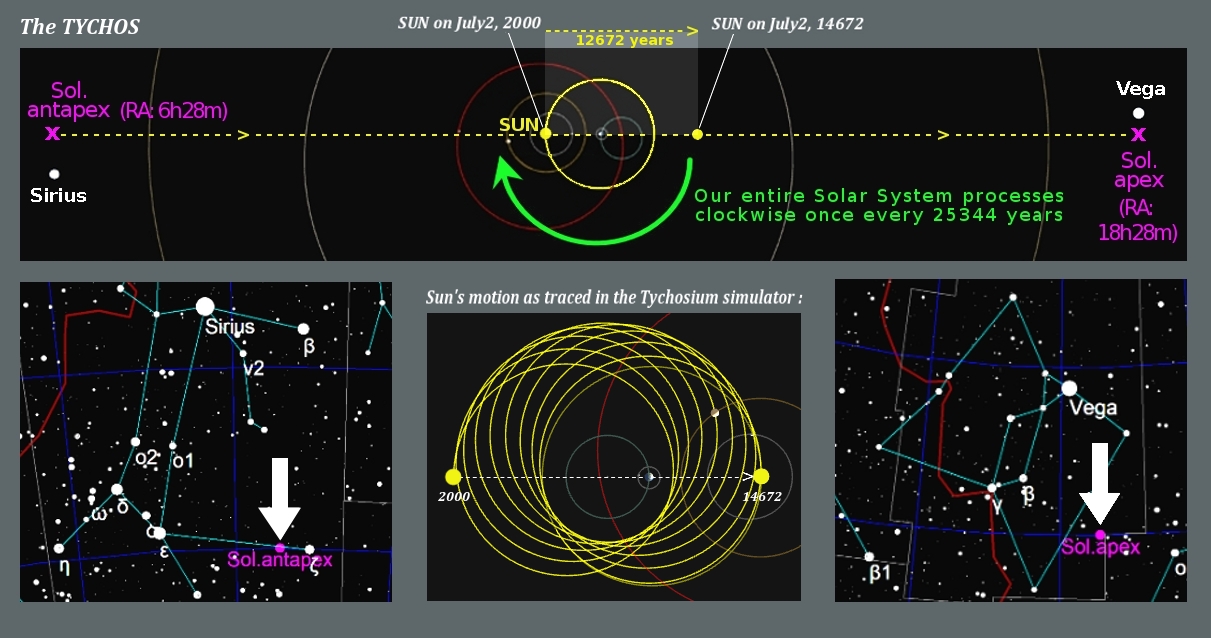 The TYCHOS, as I like to say, is here to stay!

Return to “The TYCHOS model”