Historical insights & thoughts about the world we live in - and the social conditioning exerted upon us by past and current propaganda.
Post Reply
First unread post • 1 post • Page 1 of 1 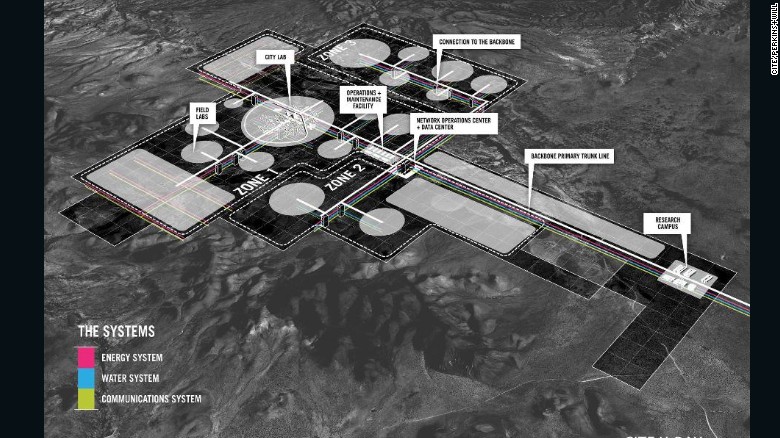 -Think of all the reptilian shape-shifting, space-alien crop-circling possibilities! No need to buckle up Marty. Where were goin’ we don’t need any roads, rhyme, reason or rationality.


(CNN)In the arid plains of the southern New Mexico desert, between the site of the first atomic bomb test and the U.S.-Mexico border, a new city is rising from the sand.


Planned for a population of 35,000, the city will showcase a modern business district downtown, and neat rows of terraced housing in the suburbs. It will be supplied with pristine streets, parks, malls and a church.

-Reminiscent of ‘Hill Valley’ in Back to the Future II?


But no one will ever call it home.

-Conspiracy Theory Shillers will have a field day with this one (underground albinos, nazis that evaded capture with Tesla designed flying saucers and escaped to the Antarctic hollow earth, zombies, aliens, etc.).


The CITE (Center for Innovation, Testing and Evaluation) project is a full-scale model of an ordinary American town. Yet it will be used as a petri dish to develop new technologies that will shape the future of the urban environment.

-No doubt, RAND will be researching and developing many of these new technologies.


The $1 billion scheme, led by telecommunications and tech firm Pegasus Global Holdings, will see 15-square-miles dedicated to ambitious experiments in fields such as transport, construction, communication and security.

-A test run for a future Zeitgeist-ish dystopic secret cell society - got it!


"The vision is an environment where new products, services and technologies can be demonstrated and tested without disrupting everyday life," says Pegasus Managing Director Robert Brumley.

-Don’t you just hate the disruptions of everyday life?


Without a human population to worry about, the possibilities are endless.

-Indeed! To infinity & beyond…


Driverless vehicles could be used on responsive roads, monitored from above by traffic drones. Homes could be designed to survive natural disasters, and fitted with robotic features. Alternative energy sources such as Thorium power could be tested at scale.

-And every simtizen will be issued a personalized Social Simcurity/Carbon Credit Card.


"You can bring new things to have them stressed, break them, and find out the laws of unintended consequences," says Brumley. "This should become like a magnet where people with ideas and technologies come, and not just test but interact."

-Wise man say, ‘The ambient threshold of credulity of the masses must always be carefully monitored and tweaked!’


The director describes CITE as an "intermediary step" between lab testing a technology and it reaching the public. He believes the process will deliver more market-ready products and address the 'Valley of Death' -- the shortfall that exists between investment in research and development, and the revenues this generates.

"The US spends billions of dollars on research and gets 2-3% return in commercial products," says Brumley. "This facility could extend and increase the return."

If you build it, they will come

After first being proposed in 2011, CITE struggled to find suitable land and the project was shelved for two years. One site close to the Organ Mountains was nixed when President Obama declared it part of a National Monument.

But a new location has been chosen, and pending the release of commercial licenses, work can begin. Builders will be on site this year, and the city could be operational as early as 2018.

Pegasus has support from the state of New Mexico, which signed a Memorandum of Understanding pledging its commitment to the project, including through "advice and guidance" on the epic construction.

-Within a stone’s throw from NASA, ASU, the Vatican’s LUCIFER telescope and Area 51. It’s gonna be a dupers delight – a Disneyland for space-pimps & press-hoes.


CITE will be constructed close to the White Sands missile range, where the first atomic bombs were tested.

-Of course, we can’t forget the blessed Trinity Test Site.


The company expects CITE to attract prestige clients from the public and commercial sectors, including government departments, academic institutions and some of the world's largest technology companies. It is hoped that the city could eventually rival tech hubs such as Silicon Valley.

-It will be a product of rather than a rival to Silicon Valley, it seems me.


High-concept 'future city' designs are spreading across the world, from waste-free Masdar City in the UAE to Portugal's PlanIT Valley, which uses 100 million connected sensors.

-Like a big worm-infested Newtonian apple, CITEs will be coming to a Gotham City near you.


But CITE's managing director is confident his project will stand out; as the only city that is purely for testing, for the variety and scale of experimentation it allows, and for the range of clients it can serve.

"The facility is open to anybody who wants to test," says Brumley. "That makes it unique."

-By ‘anybody’ Brumley means, ‘all authorized, pre-screened, state-sanctioned scienticians.’

-In other words, ‘People need technologies/Technologies are people too’


The concept has been welcomed by leading urban planning experts.

"We need to develop new testing environments that go beyond the conventional models operating today," says Nataly Gattegno, Design Principal at the Future Cities Lab in San Francisco. "It sounds like rapid simulations and evaluations would be possible with CITE, which would allow us to cycle through tests much faster."

-Translation, ‘It’s a vicsimless ‘virtual thought lab’ which will allow us to produce/prepare more realistic vicsimulations for future mass consumption.’


Gattegno hopes CITE can lead to deeper conversations about how cities are planned:

"I wonder what this means for the future of the design of our cities. Are we assuming that our cities are static and will look the same in 100 years? What if we want to test a new city rather than just the infrastructure that underlies it?"
Others are skeptical of the premise of testing without people.


"Technologies are not merely artifacts, they are social systems intermediated by materials and devices," says Professor Steve Rayner, co-director of the Oxford Programme for the Future of Cities [brought to you courtesy of the Royal Society of Sorcerers]. "The idea of 'testing' complex socio-technical systems without the people is bound to yield misleading results because real people frequently interact with materials and devices in ways that are not anticipated by the designer."

"There are many reports of people defeating energy-saving devices in buildings because they want fresh air and prop doors open."

-What vultures! Let them eat carbon dioxide cake, I say!


Brumley says that people could be added to a given experiment if necessary, but Rayner rejects this as inadequate.

-Who do you support? Brumley or Raymer? We distort, you abide! Your opinion is very important (in helping us determine how gullible you are).


"The inhabitants of cities are not just interchangeable individuals that can be dropped into experimental settings; they are diverse communities with varied cultures, expectations and behavioral patterns which grow up over time."

-It’s a small world after all!


Opinions are [“]divided[“] on whether CITE will deliver tangible returns on its bold promise. But at the very least, the test city will provide a fascinating preview of potential futures.

-Hence, I thought it’d be a good idea to dedicate a thread to CITE (an in-house studio-city, so to speak) which will undoubtedly produce a plethora of fairytales for CluesForum contributors to deconstruct.