Historical insights & thoughts about the world we live in - and the social conditioning exerted upon us by past and current propaganda.
Post Reply
First unread post • 51 posts


icarusinbound ... Captain Jack Sparrow has been aboard the ship- perhaps he's at the helm now?

Was it "Captain Jack Sparrow", as played by Johnny Drip, in "Pirates of the Caribbean" "movie", who died?

I initially heard a rather-garbled report about this via a Canadian internet streamed radio station, very soon after the ship allegedly sunk.

At that point, they said the Captain was dead, though I see recent reports list him as missing, not confirmed as dead. There was no mention of the female crew member that was subsequently reported dead from exposure, but I was sure that on-air they referred to the Captain of this copy Bounty as being coincidentally-named 'Sparrow' as well? There was also reference to the ship's film history, including 'Pirates of the Carribean', information all very-rapidly gathered, considering how soon it was after the sinking.

Here's a link to a very-recent press report that appears to list the missing Captain as a Robin Walbridge.
http://www.dailymail.co.uk/news/article ... ds-newsxml

The report also says that the 'confirmed' fatality, a Ms Claudene Christian, was (inevitably) related to Fletcher Christian, the ringleader of the original mutiny on the first Bounty.


'I think we are going to be into this for several days,' Mr Walbridge said in a message posted on Sunday on the vessel's Facebook site, which reads like a ship's log of its activities. 'We are just going to keep trying to go fast.'

That apparently-conventional Facebook site is also contrasted by another site at http://www.facebook.com/ViabilityOfTheHmsBounty which can be found by searching FB with the terms 'HMS Bounty- In Retrospect'...whether really true, or disinfo, there's much dissention/opinion/doubt being reported there, regarding the orders under which the Bounty was supposedly being sailed.

It sounds, in many respects, very like the back-story to the loss of the Concordia...
Top

Unleashed wrote:
I have found the media's reports of where the storm hit and how severe to vary wildly.
One end of a boardwalk 'devastated' and a few yards down, in front of revamped property and
casinos virtually unscathed.

One town to the next Point Pleasant supposedly half buried in sand, while Cape May looks remarkably pristine. Both on the same side facing the Atlantic.

What do posters think of this CG flyover?

*****
hi fast67,
could you please provide a link to google earth for "point pleasant" because i looked and i couldn't find the same kind of shoreline.
thanks!
deejay
******


This video is showing the dumpy town of Point Pleasant in New Jersey that has zero paved roads (google earth it for yourself). All the roads were already sand before the storm. The video starts at the beginning of the town and conveniently stops right before the town ends. That town was completely evacuated before the storm.
Top

DeeJay wrote: hi fast67,
could you please provide a link to google earth for "point pleasant" because i looked and i couldn't find the same kind of shoreline.
thanks!
deejay


Enter these coordinates into google.

Could be a coincidence. Is it also worth mentioning Disney would probably inject an ad into any disaster?
Top

Here is a gallery with 54 high-resolution pictures showing the aftermath of Hurricane Sandy:
http://www.theatlantic.com/infocus/2012 ... ll/100396/

There is even a picture of the space shuttle! 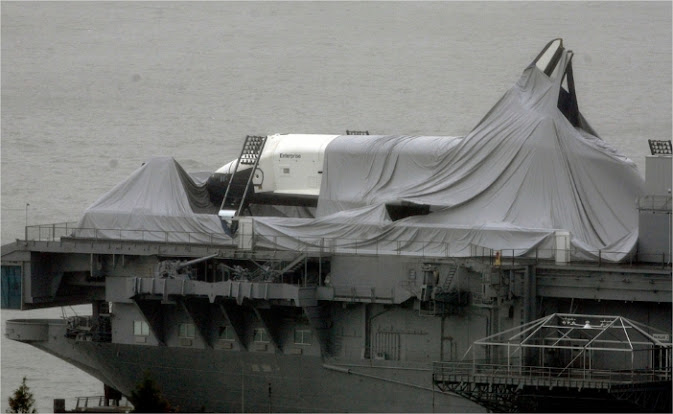 Caption: The space shuttle Enterprise is draped with torn fabric that had protected it before Sandy passed though, leaving the spacecraft shrouded on the deck of the Intrepid Sea, Air & Space Museum, on the Hudson River in New York, on October 30, 2012. (AP Photo/Peter Morgan).
Top
Post Reply
51 posts