The Iranian people today are the owners of nuclear technology.


Those who wish to speak to our people should know with whom they are speaking.

Agreed! The problem is, Mahmoud, you and your filthy unwashed cohorts/puppet masters have (with the aid of mass media) successfully convinced the international community that you reflect the sentiments of Iranians. You most certainly don't and you know it.

If they have not realized this by now they will soon.


From your lips to Allah’s ears!

But by then it will be too late.


Too late for you and your butt buddies you Pisa $chitt! Button up your shirt, slap on a tie and (for the love of God) lose the tacky Members Only jacket you dirty no-class bum.

BTW, WTF is ‘Iranium’ supposed to be? A mythical element à la ‘Einsteinium’?

As they say, “Never trust an atomist. They make up everything!”
Top

A pen pal of mine from France just sent me this quite priceless "WW2 film clip".

The film clip is clearly meant to depict - from start to finish - the infamous, 'fearsome Japanese kamikaze attacks' on the US NAVY ships.

In fact, its title is : "Ammunition ship USS John Burke gets hit by a Kamikaze"

Is that supposed to be an "ATOMIC BOMB" exploding within camera distance from the US warships - and some military-embedded WW2 cameraman ?

If so, a pretty MASSIVE piece of WW2 history is missing from the wartime history books!

I'm not sure your video posted properly.
At least it's not showing on my screen.
Anyone else having this problem?
Top

I'm not sure your video posted properly.
At least it's not showing on my screen.
Anyone else having this problem?

I have this problem only when using my smartphone. I get a message "this plug-in is not supported"
Top

I'm not sure your video posted properly.
At least it's not showing on my screen.
Anyone else having this problem?

A spectacular explosion!
Nevertheless, there is a seemingly weird jump at the time of the main explosion [not the impact of the alleged plane itself] and i wonder if a 'shock-wave' would knock the camera/cameraman at that very instance even though immediately afterwards he is centred back on the the ship/or at least where it once was?
Top

Just bumped into this.

"An advertisement for a radiation and fire resistant blanket. (Photo by Keystone/Getty Images). 3rd August 1954" I think we've finally solved the riddle: the A-BOMB HOAX was a marketing-gimmick finalized to sell fire-&-radiation-resistant blankets!

See, this 17-year-old had no such American-made blanket - and now bitterly regrets not having spent the few bucks which could have saved his skin:

Caption:
"Kunio Yamashita, a seventeen year old victim of the atomic bomb attack on Nagasaki. He sustained these burns a mile and a half away at the railway station." 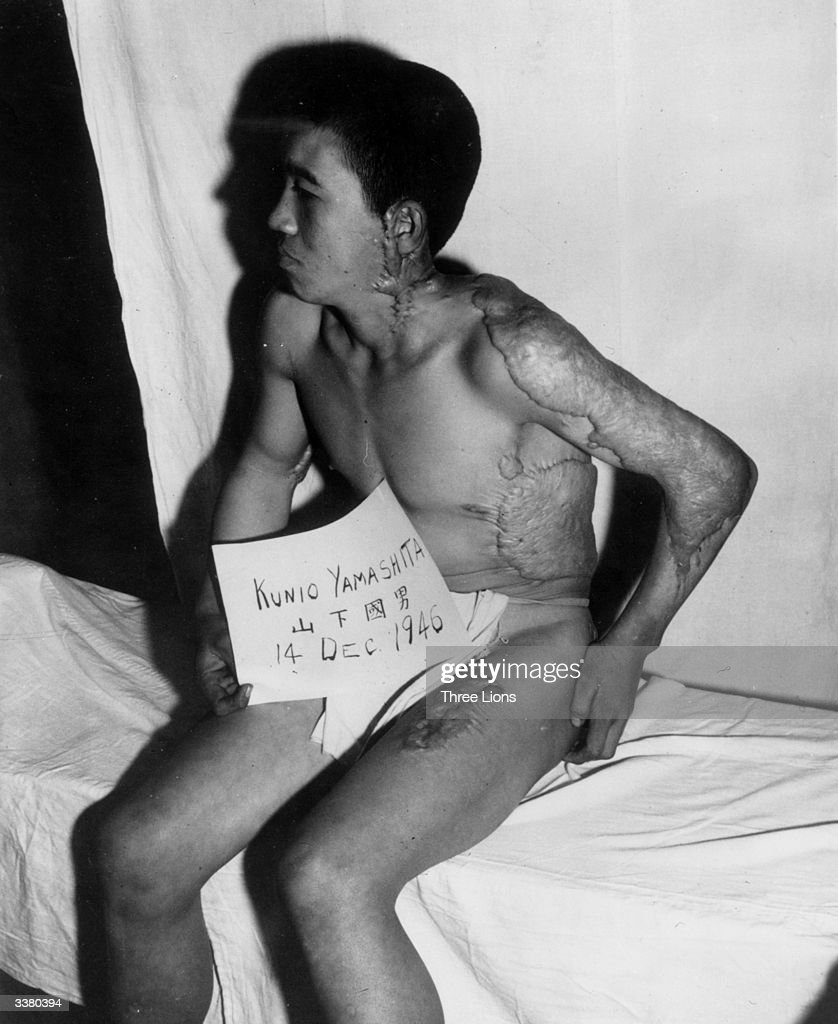 Get your A-BOMB radiation-&-fire resistant blanket NOW! Only $199.95 - for a limited period of time!

The utter silliness and sickness of USA (or Nutwork) military propaganda is, quite frankly, unbearable.

Isn’t it ironic that two peoples who take pride in their ancient culture and academic achievements have clowns like Mahmoud & Bibi as their representatives? 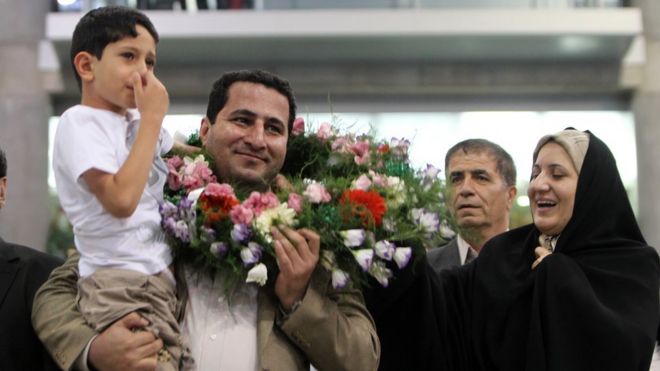 An Iranian scientist who provided the US with information about the country's nuclear programme has been hanged for treason, the government has confirmed. Shahram Amiri was executed for giving "vital information to the enemy", a judiciary spokesman said.

Amiri disappeared in Saudi Arabia in 2009 and resurfaced a year later in the US, where he claimed to have been abducted and interrogated by the CIA. He subsequently returned to Iran and was given a long prison sentence.

News of his execution emerged on Saturday, when Amiri's mother said the body had been handed over with rope marks around his neck. [

On Sunday a spokesman for Iranian judiciary, Gholamhossein Mohseni Ejei, told reporters: "Through his connection with the United States, Amiri gave vital information about the country to the enemy,"
http://www.bbc.com/news/36998747

Expecting some interesting / insightful comments from our very own "Iranian correspondent" ICfreely.

I’m humbled by your generosity, my Liege, but I must refuse the title you’ve bestowed upon me. I find it unbecoming. Might I suggest “Senior Iranologist”? Or perhaps “Iran’s de facto Ambassador to CluesForum”?


As for the senseless ‘slaying’ of yet another Iranian atomic ‘genius’, what can one say?

I’d like to think that I speak for all my fellow Iranians when I say today,

Early on, the obvious culprit seemed to be Israel. But then the Jerusalem Post assured us…


Sister of slain scientist says Iran killed him because he would not agree to help weaponize peaceful nuclear activities.

The sister of a leading Iranian nuclear physicist widely believed to have been assassinated by Israel as part of an effort to derail the Islamic Republic’s drive to create nuclear weapons says her brother was murdered by Iran’s Revolutionary Guard (IRI) because he wouldn’t cooperate with the effort to divert nuclear activities from peaceful purposes.
http://www.jpost.com/Middle-East/Irania ... ims-376656

The wife of the first scientist to be assassinated speaks about her husband's growing fear of a net closing around him – and of meeting his Israeli-trained assassin before his execution.


CBS pulled no punches – It’s been the Israeli’s all along!

At least five Iranian scientists were murdered, most of them by bombs planted on their cars as they drove to work in the morning. Remarkably, the Israeli assassins were never caught - obviously having long-established safe houses inside Iran - although several Iranians who may have helped the Mossad were arrested and executed.


In short, we're witnessing intel presstitutes doing what they do best - spinning tall tales & pretending to be more powerful than they really are.
Top

I SURVIVED A NUCLEAR BOMB THAT WAS DROPPED ON MY CITY

I wish to put into the public record of Clues Forum a conversation I had with an older Japanese woman who survived the Hiroshima 'Nuclear Bomb' blast.

I met this woman at a high school graduation party my husband and I went to last year. The wonderful young man who had just graduated high school is half Japanese and half Syrian. The father is Syrian, college professor, and is the source of much of my Syrian info, hot off the press. The mother, Marlene, was born and grew up in the U.S. and both her parents were born in Japan. Marlene was very excited to introduce me to her mother and grandmother who were in attendance for the graduation party. I feel so very fortunate to have been able to discuss such an important topic with an actual Hiroshima survivor and felt that this information needed to be put into the record.

(The Japanese Grandmother did not elaborate much in our conversation so I did a lot of prompting.)

This is a brilliant exchange, K. If you can't publish details about their identity, at least write it down somewhere so it's in some kind of historic record, please!
Top

Kham wrote:
I wish to put into the public record of Clues Forum a conversation I had with an older Japanese woman who survived the Hiroshima 'Nuclear Bomb' blast.


Thanks for this very precious 'firsthand' testimony, dear Kham. I choose to believe her testimony to be a legitimate account for a number of reasons - and not only because I have met you personally - but also because I have no reason to believe that this particular Japanese woman is a liar - nor that she's making up her story out of thin air. Her account of having been evacuated from the city of Hiroshima BEFORE the air raid started is absolutely priceless - and flies straight in the face of one FUNDAMENTAL HISTORICAL LIE, that is...

THAT THE HIROSHIMA AIR RAID WAS A SURPRISE ATTACK !

"The first nuclear bomb detonation in July 1945 and the surprise attacks on the people of Hiroshima and Nagasaki in August of that year ignited a global debate about the role, the morality, and the control of nuclear weapons that continues to this day."
https://www.armscontrol.org/pressroom/realitycheck

Of course, if an EVACUATION took place before the air raid - the whole myth of the "surprise A-bombing of Hiroshima" falls apart. This woman's account (of being evacuated towards the hills BEFORE the air raid) utterly destroys - all by itself - the official tale of the "super-secret /surprise WW2 atomic-bombings".

On the other hand, practically ALL of the "Hiroshima and Nagasaki survivors" that I have ever read or listened to (via the press / and internet) have turned out to be media or military assets. That's right, I have very good reasons to believe that most - if not all - people working for the media or the military have been trained to LIE FOR A LIVING, since both of those "institutions" (the media & the military) are founded on gross and systematically reiterated deceptions & lies - and are almost solely dedicated at diffusing the same to the general public.

"Testimony" of CHISAKO TAKEOKA, at the time a 17-year-old "making torpedoes at a military factory" :

"Testimony" of SETSUKO THURLOW, at the time a 13-year-old who claims that she was, on that very day, at the Army Headquarters" :
(Cluesforum readers may also recall Setsuko as claiming that she saw "a guy walking out of the bombed city holding his eyeballs in his hands"...)

"Testimony" of AIKO KORI, at the time a 17-year-old girl who claims that she had been sent to Nagasaki to work in an arms factory :

That's right folks: THESE are the sort of "women survivors of Hiroshima & Nagasaki" who keep feeding the myth - ALL of them with a military background.

See? I'm not suggesting that all of these women are "fake" - in any form or manner. All I'm saying is that they stink of military propaganda assets.

There were no atomic bombs dropped on Hiroshima or Nagasaki. More likely, they were just firebombed (much like countless other Japanese cities) by American B-29 airplanes. Well, that's what we are told anyway - yet I find it quite hard to believe that those B-29 attacks never happened!

"According to Yuki Tanaka, the U.S. fire-bombed over a hundred Japanese towns and cities."
https://en.wikipedia.org/wiki/Atomic_bo ... d_Nagasaki

Hoi and Simon, thank you for your kind words.

The name of the Japanese Grandmother who lived through the "Atomic Bomb" blast of Hiroshima by going with the rest of her town to the air raid shelters, is safely tucked away, to ensure it's safety against being lost to time. And I am also friends with her grand daughter on Facebook.

Air raid shelters. How normal of an explanation of survival was that.
Top

This article doesn't credit us, but it does credit whom we credit — NukeLies!


On This Atom Bomb Anniversary You’re Being Lied to About Hiroshima – and Much More to Make You Fearful
By Daily Bell Staff - August 06, 2016

We’ve reported that a squadron of 66 bombers were launched on August 6th (666) to bomb the municipality of Imabari, even though Imabari. had been bombed already, twice.

Visiting Hiroshima and Nagasaki won’t etch anything into your heart but lies.

And the sickening falsehoods allow politicians a faux rhetorical nobility that they don’t deserve.

Whatever happened at Hiroshima and Nagasaki is nothing like what is being recited today.

Bikini Atoll, where additional atomic bombs were tested following the Hiroshima and Nagasaki attacks, was repopulated by 1968, even though radiation estimates suggested the island would be uninhabitable for a thousand years.

The actual bomb blasts seem to have been faked.

I think it's a pretty soft introduction to the possibility that the "nuclear" bombings simply didn't happen. Tip of the mug to Farcevalue, who gave us the article in the latest Clues Chronicle recording.
Top
Post Reply
745 posts