It seems the first photograph of earth from space was taken with a camera installed on a V-2 rocket!

I found the following pictures and information here: http://www.gizmodo.com.au/2012/10/this- ... rom-space/ 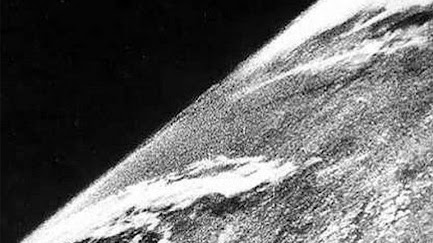 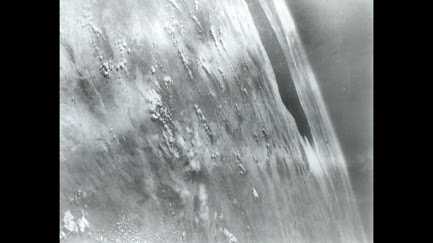 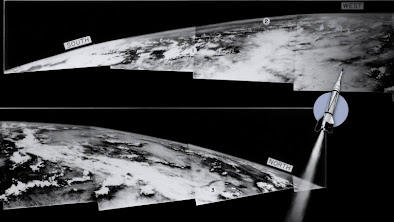 I wonder how the pictures were retrieved from the rocket. In any case, it looks like something between a rusty hull and a bowl of porridge!
Top

I wouldn´t call them stars. Looks more like greasy fingers. 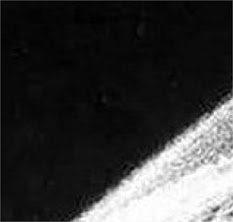 Also note the gaping black hole in the second picture posted above, with "air" being sucked in. Oh, I forgot, the earth is hollow!
Top

That´s a fantastic video! Every second of it is valuable to research on the space exploration myth. Enough ideas for a whole book.

But the most touching detail is the heroic camera! It must have been inside a clumsy box tied to the body of the rocket and, of course, the film was recovered unscathed. Things were much easier in the early days of space exploration! 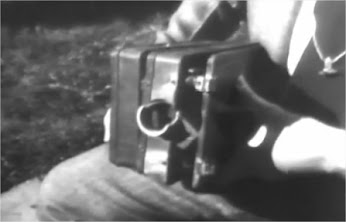 simonshack wrote: And just to get back on topic - of this V1/V2 thread :

Just compare the angle of the jet flame - before and after take off.
How does the rocket angle/pitch instantly change from almost vertical to almost horizontal?

I've been looking at this GIF image from Reichstag Fireman as well. Perusing the images of the V1 "buzz bombs" around the internet, this one (EDIT: sourced from the sicklypedia) stands out in particular. There is no mechanism to carry fuel from the tanks onboard the fuselage out to the tips of the wings, nor is there any apparent way that this fuel could be ignited.

I'm not entirely sure that all the V1 and V2 weapons were entirely faked yet. I try to believe as little as possible, as belief is essentially the death of the logical process. It is interesting to note that the historical tales of the V2 state that, because they flew so high and impacted at such a high speed and angle, that nobody ever managed to spot one coming. Suddenly, a big explosion would occur and then there's a new crater in London or wherever. I don't think I need to explain the potential for fakery here...
Top

The available V1 and V2 (and the WWII military war archives in general) are a source of hilarity which never stops giving...
As the story goes, they once brought a V2 rocket upon the Midway aircraft carrier. Here's how the thing - apparently - took off :

source of above 'Walt Disney' clip :

"OPERATION SANDY":
"The U.S. Navy attempted to launch a reassembled German V-2 rocket at sea. One test launch from the aircraft carrier USS Midway was performed on September 6, 1947 as part of the Navy's Operation Sandy. The test launch was a partial success; the V-2 went off the pad, but splashed down in the ocean only some 10 km (6.2 mi) from the carrier. "

The Doodlebug Legend just keeps on giving. The BBC is re-telling an horrific Doodlebug story from 70 years ago. On the night of June 30 1944, a Doodlebug intended for London fell some way short of its target. Exploding with tragic consequence on Weald House, Crockham Hill in rural Kent. At the time, the house was a makeshift home for child evacuees from London. In total, 30 souls/vicsims were killed that terrible night. Many were babies just a few months old. It was the single-worst atrocity to hit the Home Counties, and the worst Doodlebug attack of the whole war.

It's difficult to find much credible in that list. Many of the names (and alleged families) just draw a blank.

Especially odd is that many child victims/vicsims of the Doodlebug attack - all aged 6 months to 2 years - were supposedly from affluent homes. Particularly rich by 1940s standards. Several were from the exclusive Victorian mansion blocks of West London. Is it likely those parents would hand their babes and toddlers to the council? For them to be brought up many miles away in grim local authority children's homes?! Wouldn't their wealth have bought a better future for their kids? Moreover, at least one family address in that list is completely fake. And why evacuate your child from deepest rural Norfolk to Kent (Patricia May SUTTON, age 6mo)? And no one bothered to record the full parental details for all the kids?? Elizabeth Ann VANGO, aged 12mo - no clues at all on her mom and pop? Poor little mite.

There's a memorial in Edenbridge churchyard to commemorate these 30 Doodlebug dead. But there's no indication of their place of burial (if any where). Apparently, burials of Civilian War Dead weren't officially recorded (just too many vicsims to keep track of?) So it's possible this Doodlebug vicsim list - and the alleged families - are a post-war fabrication.
Top

Here's a weird thing - the BBC's two pictures of Weald House (before and after its Doodlebuggery) seem to show two different buildings.

And it seems the missing floor in that pic is not the top floor but the bottom one! And get how the BBC has bizarrely turned that second pic (supposedly a B&W still from 1944) into a 3D "stereoscopic" image!

It's not allowed to do that!

Was this Doodlebug bombing of 30 June 1944 - "the worst Doodlebug attack of the whole war" - killing 22 babes and 8 nurses - nothing but a hoax? Manufactured by the Government itself - just to keep people frightened?! If so, how many Doodlebug attacks were real, if any?
Top

Was this Doodlebug bombing of 30 June 1944 - "the worst Doodlebug attack of the whole war" - killing 22 babes and 8 nurses - nothing but a hoax? Manufactured by the Government itself - just to keep people frightened?! If so, how many Doodlebug attacks were real, if any?

Maybe it was so Churchill could justify the fire bombing of Dresden & Hamburg.
Top

antipodean wrote:Maybe it was so Churchill could justify the fire bombing of Dresden & Hamburg.

The 'Doodlebug' bombings seem very suspect - most likely non-existent. And if the bomb damage wasn't from Doodlebugs, then conventional aerial bombardment, or even ground-based attacks must have been used. Whether by "enemy" or "friendly" Luftwaffe or RAF attack. With the bombings coordinated from the ground by the military-intelligence of the 'targetted' nation. Air raid sirens sounded, whole districts evacuated, and explosives and incendiaries carefully delivered to clear whole streets and blocks of unwanted 'slums'. Not unlike the redundant office block clearances of Manhattan on 9/11!

If so, it begs the question: were Churchill and Hitler really at war? Or were they working for the same game-masters? Puppets of those bankrolling the whole silly slugfest? Puppets of those waiting gleefully for the enormous profits from rebuilding the war-torn continent? To the banksters, it doesn't matter who "wins". Before it even kicked off, all parties agreed that the debts of the vanquished would be settled by the victor (as well as their own debts). So may the best man win! And with that reassurance, razing as much as possible during the war was always in the financiers' interests. It's widely alleged that the RAF was assiduous in NOT dropping bombs on 'friendly' factories in Germany (the IBM and Ford plants, for example). No doubt the Luftwaffe bombed by the same rules. Not much of a stretch then to question whether the Luftwaffe bombings of London's back-to-back slums were, in fact, ordered by London!
Top

My parents lived in London through most of WW2, I was raised on stories about spending evenings cooped up in an Anderson shelter playing board games whilst air raids were happening.

My Mother often told me how the first V1 bomb to hit London happened on her birthday.

There were obviously some sort of bombs being rained on London in 1944, whether they were doodlebug guided missiles I wouldn't know.

If the technology didn't exist and was bullshit, the same would have to apply to the stories about, the leading Nazi Aeronautical Scientists secretly recruited by NASA /CIA after the war.(operation paper clip etc)

I think WW2 was basically a Conflict between Zionists and the Vatican.
Top

I have an elderly relative who claims to have seen a single 'flying bomb' and heard reports of a group of at least 5 flying overhead followed by distant explosions. She says there was no fearsome screeching sound and that they were shaped similar to a jet plane. She would have been 6 years old. I'm not saying it's true, but she believes it.

Can you elaborate on your theory about WW2? Sounds interesting. Who won?
Top

dblitz wrote:I have an elderly relative who claims to have seen a single 'flying bomb' and heard reports of a group of at least 5 flying overhead followed by distant explosions. She says there was no fearsome screeching sound and that they were shaped similar to a jet plane. She would have been 6 years old. I'm not saying it's true, but she believes it.

Can you elaborate on your theory about WW2? Sounds interesting. Who won?

There are actually people who claim to have seen airplanes hit two tall buildings in New York some years back. Ask your "elderly relative" what colour the flying bomb was! Did it have "Bomb" written on the side? Was it during the day or at night? Who launched the flying bomb? Did it come all the way from Germany or from an airfield in England nearby?

Belief is a very dangerous thing.

People were being bombed by RADIO announcments álá Orwell

As to your last simplistic question as to who won? The bankers and the illusionists won.

I think Edna is spot on.
Top
Post Reply
89 posts