The following news story was a leading item in "The Age" newspaper in Melbourne Australia.
Unfortunately "The Age" is doing it tough so they have let a lot of photographers "go".

The story was unremarkable- about an unsolved traffic accident that was caused by a diesel fuel spill on a road.
http://www.theage.com.au/national/oil-s ... zsz5o.html
The Image immediately caught my eye though.

So I wrote to the reporter of the story.


I am curious about your photo accompanying the Amber Quinn story.
The illustration is obviously a composite composed in "photoshop" or the like.
The couple are shown superimposed on a rural road scene with added shadows.
The perspectives and focus clues as well as the lighting give the game away.
Is it right to credit Eddie Jim as a "Photographer" or would it better to tell
the truth about his "Fauxtography"?
Is this a common practice in reporting?

and he graciously replied

Thanks for reading, and for taking the time to write.

I can assure you the couple were not superimposed on the road. They were photographed near their home in Portarlington.

Sorry my graphic is not clear, but the gutter is 13 cm high so that makes the couple 79cm tall which could be a story in itself! (Honey I shrunk the accident victim!)
Last edited by iCONOCLAST on Wed Jul 09, 2014 4:54 am, edited 1 time in total.
Top

Yes, there are a number of "what's wrong with this picture" aspects to that ridiculous "photo" and the Lilliputian couple is certainly a major one.

I suggest writing back to that "reporter" and telling him he is lying sack of shit.

Amazing. I e-mailed him as well, just to see if his response was consistent.

I'm writing to inquire about the photo used in this article. It is an obvious photoshop job and is not listed as such. Do you normally do this sort of thing in your articles?


I am the journalist, not the photographer, but it is clearly not photoshopped. It is a photo taken near the Quinns home in Portarlington.

And no, this never happens in articles.

I agree with your rough measurements and asked him about that. Here is his reply:

I'm not sure if you're familiar with the use of flash, but it creates shadows, as well as light (tricky, I know).

The photo has also been clearly taken from an elevated position a significant distance further along the road, unless you consider it possible our photographer is about three metres tall. I suppose this isn't out of the question, given you think the Quinns are 80cm tall when compared to the height of the gutter, which would make the gutter roughly 5cm high.

Can you please help me out with an appropriate italiano epithet for our reporter friend Nino.

I was thinking along the lines of "delusional crazy fucker"

Sadly, this guy is a crime reporter in a major newspaper. Sounds like
he has met his match with ANONJEDI2 though!

My reply to him:


With respect, the shadows in question are cast from the right and left, not from the direction of the camera. Any shadow caused by camera flash would appear behind the couple.

They are clearly meant to be shadows cast from the sun and are in opposite directions. Yes, the photo of the scenery has been taken from a slightly elevated position, but the people in the photo have been pasted in.

Regarding the height of the couple, it is YOUR PHOTOGRAPHER (or perhaps say Phonytographer?) who is depicting these people as 80cm tall with an approximate gutter height of 13cm.

Furthermore, the two people standing in this photo have shadows running in complete opposite directions of each other, with the shadow on the left in conflict with the shadows of the trees in the background! This has nothing to do with the camera's flash and you know it. Perhaps you would like to put me in touch with the person who took this photo?

The flash is remote. These have been available to photographers for at least five years. It means they can be set up wherever the photographer requires, and activate when they take the photo. Given you did not even know this was possible, it's completely pointless continuing this further.

I am well aware of what a remote flash is and how it works, photography is one of my hobbies. If you are claiming a remote flash was used in this photograph, can you please tell me where this remote flash was located? I would assume your answer would be to the right of the frame, thus causing the shadow to the left? Please clarify this point, because there are several problems with that explanation as well.

Furthermore, you have not addressed the most glaringly obvious problem with this photo which is the height (and overall size) of the subjects. Can you please provide me with some answers as well as the name and e-mail address of the photographer who took this picture?

I kindly ask for your response.

I don't imagine I'll receive one.

I have tweeted the photographer directly...

I responded with a thank you.
Top

Can you please help me out with an appropriate italiano epithet for our reporter friend Nino.

I guess you could just text this brief sentence to that Nino entity : "Ma vai a cagare, bugiardo di merda". But, quite frankly, I doubt your message will be read by a flesh-and-blood human being named Nino Bucci. Here are the only two images to be found of this alleged crime reporter : 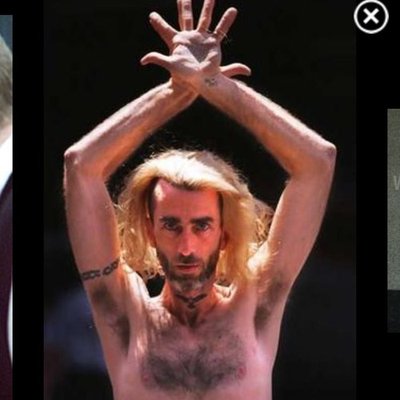 
See, I made a quick search for the sort of 'crime reports' which this "Nino Bucci" entity is credited with. Here are but three of them (all dated around 2012) - all featuring alleged murder victims of, shall we say, equally dubious human (and photographic) nature ...


If I should take a quick, yet educated guess, I'd say that the reason why "Nino Bucci" deals with fauxtography - is because "he" is a fauxreporter. Of course, this would also mean that Australia is - sadly - not immune from the pathetic, global scourge of faux journalism.

"THE death of 11 Indians in murder-suicides this year could have been prevented if the shroud of secrecy about mental-health problems in migrant communities was lifted, a psychiatrist says."

I have contacted the Eddie guy via twitter- the conversation so far..

You are spot on about this guy.. In Australia we call them wankers or bullshit artists and the like.

It is good to at least niggle at these recalcitrant bastards...
Top You might enquire which camera was used and ask it to email you the original image complete with exif data.
Top

I asked him for the .exif data last night. Here is our Twitter exhange:


Me: Some problems w/this pic that suggest it has been photoshopped, ie, lighting and the size of subjects? (linked to photo)

EddieJim2: you must be an expert.

Me: Can you please explain the perspective/size/height issues of the subjects? I won't even ask you about the lighting and shadows.

EddieJim2: you may need to learn more about professional photographers skills, this is what i do everyday for my paper

Me: Can u provide the original photo with .exif data? Do you have any comment on the tiny size of the subjects compared to the curb?

EddieJim2: i suggest to write a letter to our editor in chief to arrange or to join our Clique photo club to attend some workshop

Me: So, no comment then? Can you provide the original file with .exif data intact?

EddieJim2: thank you so much for your time looking at my pic, follow me on instagram ejimphoto. I still cant believe germany beat bra 7:1