The Antichrist and the media's role in promoting him:
full link: http://www.youtube.com/watch?v=9AvHnYOejI4
Top

AGE OF DECEIT 2 - Alchemy and the Rise of the Beast Image (back on YouTube):
full link: http://www.youtube.com/watch?v=gfRzUI8hkwo
Top

How is Rexella doing?
Top

For the few Christians on here this may concern, there is a TV show that you might want to keep an eye out for called "Cosmos: A Spacetime Odyssey". The heathens are really foaming at the mouth at this show. I noticed that the very last episode in the link below will be about Dark Matter, the highly suspect "god particle" that CERN is supposedly looking for with the Large Hadron Collider. From this episode on into the next season, we can expect the show to promote the "cosmic intelligence", the "god particle" they claim is guiding the universe as I explain in my video. I'm sure the Large Hadron Collider will make an appearance at some point in this TV show. The second phase of this long war against God is about to begin.

Dcopymope wrote:For the few Christians on here this may concern, there is a TV show that you might want to keep an eye out for called "Cosmos: A Spacetime Odyssey".

Not necessarily related to Christianity, but this is definitely on topic for fakery:

Dcopymope wrote:For the few Christians on here this may concern, there is a TV show that you might want to keep an eye out for called "Cosmos: A Spacetime Odyssey".

Not necessarily related to Christianity, but this is definitely on topic for fakery:

The show's motive is definitely questionable.

The Afro heathen that claims the universe to be all there is, or ever will be: 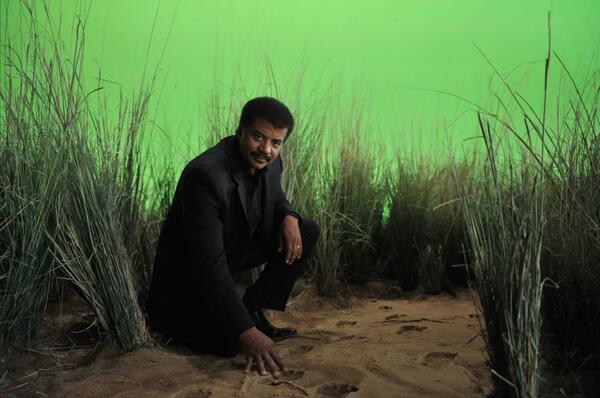 @neiltyson That's where they faked the moon landing, too. Right?

@neiltyson Reminds me of the plains of Times Square, created on set at the Brooklyn Armory, NY for "I Am Legend."

Apparently the show failed miserably which is why its taking so long to get back on schedule and finish the season. When the president of the United States is promoting the show, a major political showman, then you know something stinks about the whole thing. There must definitely be a long term agenda behind the massive hype this show got.

Mr. Obama tells to us to open and expand our 'imaginations' for the next great "discovery". The Bible has plenty to say about imaginations:


Because that which may be known of God is manifest in them; for God hath shewed it unto them.

For the invisible things of him from the creation of the world are clearly seen, being understood by the things that are made, even his eternal power and Godhead; so that they are without excuse:

Because that, when they knew God, they glorified him not as God, neither were thankful; but became vain in their imaginations, and their foolish heart was darkened.

Professing themselves to be wise, they became fools,

And changed the glory of the uncorruptible God into an image made like to corruptible man, and to birds, and fourfooted beasts, and creeping things.

Wherefore God also gave them up to uncleanness through the lusts of their own hearts, to dishonour their own bodies between themselves:

Who changed the truth of God into a lie, and worshipped and served the creature more than the Creator, who is blessed for ever. Amen.- Romans 1: 19-25


For though we walk in the flesh, we do not war after the flesh:

(For the weapons of our warfare are not carnal, but mighty through God to the pulling down of strong holds;)

Casting down imaginations, and every high thing that exalteth itself against the knowledge of God, and bringing into captivity every thought to the obedience of Christ; - 2 Corinthians 10: 3-5

nimblehorse wrote: What if I said I don't think Christ died on the cross & that he survived crucifixion.

Which school of thought are you following on this? There are several.
Top

This to me is the psy-op's of psy-op's...The Church, The Bible. Talk about brain washed mind controlled zombies.

I'm not suggesting that Jesus is an fabricated literary construct. I believe there are more secular documents supporting the existence of Jesus the man than it does for Julius Caesar.

This is a very complex issue & I'm no expert but I do feel I can de-construct the phony baloney Christian psy-op.


Dcopymote wrote:
This is why Christianity is not a works based faith, we are saved by grace through faith in Jesus alone, not by works.

this is Antinomianism and Is an apostasy(a falling away from the truth).
http://en.wikipedia.org/wiki/Antinomianism

Here are some of my findings from the last two years of intense study.

I would say that the Bible in itself is NOT a religious book. Quite a bold statement. It's basically a history book/genealogy with various morality tales. It contains the Law, Statutes, Judgements, Ordnances. Prophecies past & future. Psalms.

I say that the Catholic church is 95% pagan with 5% lip service to Christ.(Catholic actually means 'universal')
Bums on seats & shekels in the basket please

I suggest that Christianity as we know it today is sadly a pale imitation.

The King James Version has some 50,000 mistranslations, it is far from being a perfect work. I call it "the Flat Earther Translation"

In my analysis of biblical scripture, I ask these questions: Who were the original authors & what did they intend their works to mean, to say ? What was the historical context in which they were written ? What is the correct definition for the words they chose & are Idioms in play ?

This Christian Identity bible study is radical in the extreme. I expect to get good feedback from non believers & atheists (secularists) than with any modern "Christian's" simply because by going back to the original source material and using a concordance, scripture tells a completely different story to the one sold in the churches or in any denomination. A story that the "universalised" Christian message cannot abide.

In christs own words:
Matthew15:24 " But he answered and said, I am not sent but unto the lost sheep of the house of Israel."

James1:1 "James, a servant of God and of the Lord Jesus Christ, to the twelve tribes which are scattered abroad, greeting."

Here are a few 'truths' to the Identity of the Israelites of the bible.


nimblehorse wrote:Greetings reader.
John's site also links to http://www.anglo-saxonisrael.com/ ...which is an Christian Identity site...which lifts the lid of the 'Judaism is somehow connected to the bible hoax' or 'the Jews are Hebrews/Israelites/Semites hoax'. The Christian Identity Dual Seed-line message is mind blowing & it gets all the Judao-Christians foaming at the mouth...I love it...also wiki has the page locked as Neo-Nazi terrorists, so funny...

Not sure which country you are posting from, depending, you might not be aware that the Aryan Nations came directly out of CI and as well as it was linked to The Order, several skinhead organizations, and a few other groups. It's still very big in prisons.

If it really is the only interpretation of scripture you understand, I'm not sure what to say. Do you believe that only white people have souls for example?

Here is how I deal with this sort of religious bigotry:


Genesis 2:7
King James Version (KJV)
"And the Lord God formed man of the dust of the ground, and breathed into his nostrils the breath of life; and man became a living soul."

The word "soul" from the above verse, in the original Hebrew is : ' nephesh (neh'-fesh) from H5314; properly a breathing creature, that is, animal or (abstractly) vitality; used very widely in a literal, accommodated or figurative sense(bodily or mental).
http://www.lexiconcordance.com/hebrew/5315.html

I'm not wanting to cause conflict between forum members & myself. I appreciate dcopy for starting the thread. I see he has a few locked threads trying to bring theology into cluesforum.

what I bring to this thread is good old fashioned word study & some common sense.

What a mishmash.
Top


I am filled with dread every time this thread The Truth About Christianity floats to the top of the forum. This is not only because I had my own tedious religion shoved down my throat but other's tedious religions as well. I can liken the feeling to seeing my brutal father's late model car in our driveway. He was a traveling salesmen and often away and I liked things like that. Growing up in the deep South, as I did, I had constant reminders of the proximity of the compassionate destroyer. The sign below reads, for the fortunate who didn't grow up in its shadows (and these were everywhere): Get Right With God I love the ironic juxtoposition of the freedom marchers
Top

ADMIN NOTICE: I have re-named this thread "Thoughts on Christianity" because, as much as this forum is about searching for truths (or / and exposing lies) - I really think it is pointless and even foolish to search for - or seeking to 'establish' - any Truth about any religion. I should probably make it clear that I respect everyone's right to follow his / her religion - and that I'm well aware that some of those creeds are used by bad people to exert forms of mass control (which is something we try and combat here). However, it seems that discussions on these matters inevitably degenerate into endless, circular pissing contests - the sort of which we also discourage here.

There are countless forums out there to discuss religious matters - let us not add to the 'noise'. For the time being, I will tentatively (if reluctantly) keep this topic open, hoping the debate will stay civil and keep focusing on issues related to the oppressive forms of mass control that some religions facilitate - or the raving insanity that oft surrounds them, such as:


Thanks for everyone's kind comprehension
Top

If God = Your Wonderful Human Imagination, as one New Thought author/speaker asserts*, then yes, God did tell Bush to do as he did.

*Neville Goddard. The world needs not a new church, but a new Christology.
Top

If God = Your Wonderful Human Imagination, as one New Thought author/speaker asserts*, then yes, God did tell Bush to do as he did.

*Neville Goddard. The world needs not a new church, but a new Christology.

Lately, when the subject arises I ask, with curiosity and in all earnestness, for those invoking their deity to explain what they mean when they use the "G" word.

I have yet to hear two responses that resemble each other, including those from the two Jehovah's witnesses on my doorstep who had the question posed to them.

It's no wonder that conversations around this topic devolve.
Top

simonshack wrote:I have re-named this thread "Thoughts on Christianity" because, as much as this forum is about searching for truths (or / and exposing lies) - I really think it is pointless and even foolish to search for - or seeking to 'establish' - any Truth about any religion.

You did very well. The original name of the thread was quite a misnomer, seeing as it is a collection of distortions of Christianity rather than truths. I agree CF is not the ideal venue for this type of discussion.