Anything on the news and elsewhere in the media with evidence of digital manipulation, bogus story-lines and propaganda
Post Reply
First unread post • 73 posts

brianv wrote:"The first people we know created plays were the Ancient Greeks, about the year 500 B.C. They divided plays into two kinds: tragedy and comedy. This division is still used today. The best known Ancient Greek writers of plays are Aeschylus, Sophocles, Euripides and Aristophanes. Some of their plays survived, and are still performed today.

These ancient Greek plays were performed outdoors in large amphitheatres, so that many people could see them. There were contests among the playwrights (people who write plays are called playwrights) and the winner would get a prize.

The Greeks were full of brilliant ideas. They used mechanical devices like trap doors and the machina: a crane for winching gods on and off the stage (hence 'Deus ex machina'). They had a Greek chorus that offered information to help the audience follow the performance. The chorus comments on themes, and shows how an audience might react to the drama. The players wore masks. Illustrations on vases show helmet-like masks, covering the entire face and head, with holes for the eyes and a small aperture for the mouth, plus a wig. The mask was to ‘melt’ into the face and allow the actor to vanish into the role. Therefore, onlookers did not think about the actor, but thought about the character."

An ancient Roman theatre in Syria

Just to clarify for the benefit of everyone's general cultural literacy: the ancient Greeks only built semicircular theaters, like the Roman one pictured here. Amphitheaters came later, during the Roman Empire, and, like the Colosseum in Rome, were fully enclosed ovals, able to seat many thousands more people than the more common semicircular theaters.
Top

...but the first important question for me on the james foley film is:
why did the terrorists (born to terrorize) cut the most horrific scene?
Are the terrorists starting to be gentle?....

The laughs just keep coming. I totally enjoyed this rather long and winding interview with James' parents - the newer set - on PBS.

Just like the picture that falls off the wall, the phone keeps ringing! And why do the interviewers ask so few questions, allowing the parents to ramble on pointlessly. And is that Elliot Rodgers, a bit older, playing the role of not so grieving brother? James was such an amazing and caring person, he even took care of the younger prisoners in his cell! Not sure how they got this information as they didn't know where he was held, but mothers have ways, I guess!

Sadly, comments have been disabled for this video!

Strange how nobody seems too upset.

I have to ask this question. Are we witnessing a comedy posing as a tragedy?
Top

What's with the blue stripes? Seriously. It can't be a coincidence. Does it imply 'victim' or something?
Top

brianv wrote:What's with the blue stripes? Seriously. It can't be a coincidence. Does it imply 'victim' or something?

Sorry, but I don't know the meaning of blue stripes. Please explain. Thanks.
Top

Is this a different father? Maybe they double booked the parents on MSNBC and PBS so they had to send it a sub?

What is more interesting than the video, however, are the comments, which have NOT been disabled.

Who REALLY are these actors and who do they work for.....James was cia, oops I mean he is cia cause he's not dead. This is just another hoax from the zionists controlled govt and whoever thinks otherwise are the same sheep that I always run into who believes that only two buildings came down on 9/11﻿

[That bitch seems to be enjoying the "beheading" a lot. This shit cannot be the mother of a man who was just beheaded. THE BEHEADING WAS STAGED, an excuse for US government to bomb Iraq, Syria﻿/quote]


Are we channeling Sandy Hook????﻿

There is not ONE positive comment. This lends support to mine and Peter Shea's theory that they WANT us to get it. They would be hard pressed to make it any more obvious. And it looks like people finally are!
Top

brianv wrote:What's with the blue stripes? Seriously. It can't be a coincidence. Does it imply 'victim' or something?

Sorry, but I don't know the meaning of blue stripes. Please explain. Thanks.

We have a thread dedicated to said fashion item appearing with regular occurrence in these pageants.

an other drama school that doesn´t work

for example in this site, they say "video" but nothing

gwynned wrote:Is this a different father? Maybe they double booked the parents on MSNBC and PBS so they had to send it a sub?
There is not ONE positive comment. This lends support to mine and Peter Shea's theory that they WANT us to get it. They would be hard pressed to make it any more obvious. And it looks like people finally are!

EDIT:
Well, I believe it's pretty obvious that this is acted. They even laugh together etc. Cause laughter in situations like these don't fit really well and so it may affect the viewer. But it's so extremely obvious that you really get the feeling that we should see this. Really, the acting could've been way better but it's so bad that you really get the feeling that it's done on purpose.
Top

Ladies and Gentleman, please watch THIS: 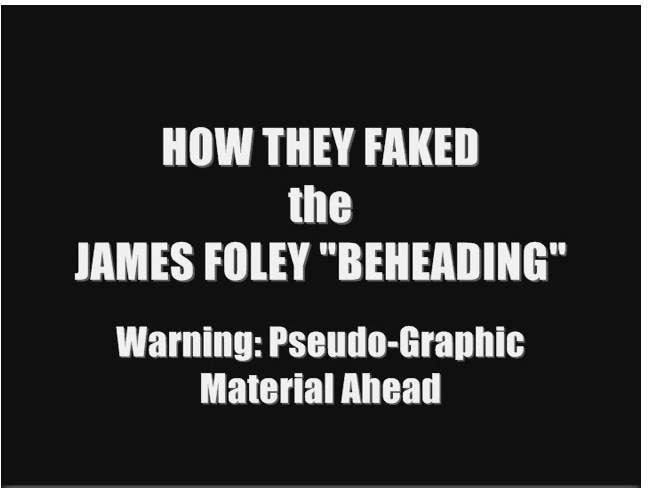 Here is the latest fake beheading video of Steven Sotloff, even more absurd than the Foley video.

Imagine someone having the physical calmness/presence/ability to move their leg in such a manner while having their throat slit!

Guess who "found" the Steve Sotloff beheading video first? YES, they found it:


The video was first obtained by SITE Intelligence Group (Search for International Terrorist Entities), also known as SITE Intel Group, a relatively under-the-radar yet apparently very powerful research body that monitors jihadist movements. The Bethesda, Maryland, organization has published a shortened version of the beheading video and published a transcript on its news site, which has been largely inaccessible since news of the beheading broke, likely due to an uptick in Web traffic.

/BTW according to this article, "Sotloff" was Jewish (though I doubt sims have religion, but actors might have

What can I say? LOL Business as usual. The Al Quaeda psyop is still going strong, evolving into the ISIS psyop.

Want my take on it?
ISIS leaders are must be Mossad/Mistaaravim commando, while the rank and file are 20-something young immigrant Arab bloods eager for some action instead of filling the shelves at some European Tesco, or local Iraqi Sunni unemployed smack addicts fighting for their next fix.
I laughed the greatest when

ISIS member Abu Turab Al Mugaddasi said that they would destroy the Kaaba in Mecca: “If Allah wills, we will kill those who worship stones in Mecca and destroy the Kaaba. People go to Mecca to touch the stones, not for Allah.”

Devoted muslims they all must be, for sure! Mazel tov, ISIS! LOL
Top
Post Reply
73 posts