Anything on the news and elsewhere in the media with evidence of digital manipulation, bogus story-lines and propaganda
Post Reply
First unread post • 73 posts

just i don´t know if is silicon like 80´s movie or digital, i think silicon

just i don´t know if is silicon like 80´s movie or digital, i think silicon


That gruesome animation was quickly removed ("Jim Foley beheading by ISIS"...) Here's a replacement for it:


That's the full video. The beginning shows the Obama speech, the 2nd half is the part where James Foley is beheaded. What I think: The whole ISIS thing is totally fake, so is the video. Especially when they "cut" the cutting part makes the whole thing really suspicious. Also, normally (I'm not quite sure, so someone may validate and correct me here) if you cut someone's throat, shouldn't be blood squirt all over the place or atleast be seen? In the last few frames of the "cut" part this wasn't the case. It more looked like that this "killer" played with his plastic toys. Gonna do some analysis on this.

And here, a nice "head lost" prank. People can be fooled so easily!

This "foley" story gave me a déjà vu... and it is almost literally "ten years after"... 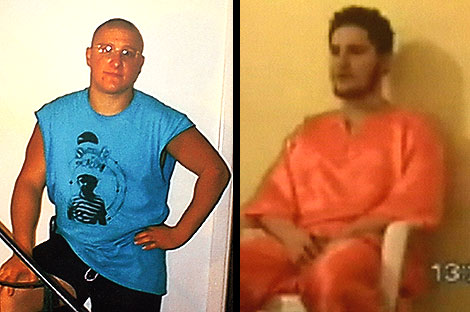 
Nicholas Evan "Nick" Berg (April 2, 1978 – May 7, 2004) was an American businessman who went to Iraq after the US invasion of Iraq. He was abducted and executed according to a video released in May 2004 by Islamist militants in response to the Abu Ghraib torture and prisoner abuse involving the United States Army and Iraqi prisoners. The CIA claims Berg was personally murdered by Abu Musab al-Zarqawi

. The decapitation video was released on the Internet, reportedly from London to a Malaysian-hosted homepage by the Islamist organization, al-Ansars

Berg was interviewed for filmmaker Michael Moore's film Fahrenheit 9/11. Moore chose not to use the footage of his interview with Berg, but instead shared it with Berg's family following his death.

On May 14, 2004, it was revealed that Nick Berg had been investigated during the U.S. government's investigation of Zacarias Moussaoui. Berg's email address had been used by Moussaoui prior to the September 11, 2001, attacks. According to Berg's father, Nick Berg had a chance encounter with an acquaintance of Moussaoui on a bus in Norman, Oklahoma. This person had asked to borrow Berg's laptop computer to send an email. Berg gave the details of his own email account and password

, which were later used by Moussaoui. The FBI found that Berg had no direct terrorism connections or direct link with Moussaoui.

...and it's still possible to chip in for Nick: http://www.nickberg.org/berg/Berg_home.html

New, foley paint on an old garbage can.

Of course, you can already donate money for Foley: http://www.freejamesfoley.org/

On that page is also a rather strange, terse message from the supposed mom of J. Foley, "Diane Foley":


We have never been prouder of our son Jim. He gave his life trying to expose the world to the suffering of the Syrian people.

We implore the kidnappers to spare the lives of the remaining hostages. Like Jim, they are innocents. They have no control over American government policy in Iraq, Syria or anywhere in the world (??).

We thank Jim (rather impersonal wording, eh?) for all the joy he gave us. He was an extraordinary son, brother, journalist and person. Please respect our privacy in the days ahead as we mourn and cherish (??) Jim.

My son just got beheaded by thugs, but, eh, what the hell, I'm more concerned about A-murican policy and its implications, and in fact I'm already content to just cherish (???) good ol' headless Jim.

What a strange, arbitrary amount, but of course it's the lame numerological rehash: 1+3+2+5=11.

However, the biggest laughs I got from this:

Three Islamist militants with British accents have been dubbed "The Beatles" by hostages taken in Syria, who recount tales of particular brutality at the hands of European captors. The presence of British jihadists fighting for ISIS is in sharp focus following the release of a video showing the beheading of American freelance journalist James Foley. The video is narrated by a male voice that appears to be British - and has set off alarm bells about the dangers of foreign fighters taken up arms in Syria and Iraq.

Psy-Op narration has officially jumped the shark with the force of a thousand Breivik bombs.

Who the fucking hell writes this crap?
Top

The fakery in this one must be bad.
Top


The Metropolitan police said on Wednesday that it is investigating the contents of the video under its counter terrorism command, indicating that its public use or its being shared online could be seen as a criminal offence under the UK’s terrorism legislation, the Guardian reported.

Is this the real life? Why is this silliness passing without so much as a hint of laughter from the general public?

And speaking of laughter, here are the (very bad) actors hired to portray the parents of "James Foley":

Makkonen wrote:Psy-Op narration has officially jumped the shark with the force of a thousand Breivik bombs.

Who the fucking hell writes this crap?

It's called "austerity" , I think they outsource to Bollywood

More from "John" and "Diane", the purported Foley parents:

Some inexplicable nuggets from this video:

0:07 "A very compassionate American...I mean, the best of America" Huh? What does emphasizing nationality have to do with anything in your personal tragedy unless you just so happen to be a propaganda actor reciting a script?

2:02 Diane recites a line with an inexplicable - and hilarious - change in accent... and again at 2:21. I was already in fits of laughter.

2:27 ...but this takes the cake. John does a bizarre speaking-from-the-side-of-the-mouth thing, "cries" for a moment, then Diane snaps into action, remembering her correct lines in the nick of time: "Sooo... Jim had a big heart...", and at 2:39 John is suddenly ready again, all dry-eyed and calm. Cue another actor sneaking in at 2:42 and then John doing a bizarre horse impression apropos of nothing at 2:46.

2:44 "You know, we just pray that Jim's death can bring our country together in a stronger way (emphasis by deliberate hand gestures) and with the values that Jim holds dear... held dear..." Again, your son died brutally at the hands of "terrorist" thugs - are you not in the least bit livid at "Jim's" media company, your government, etc.? This is an oddly indifferent way of transforming your loved one's death into propaganda - just sayin'!

There is, of course, absolutely nothing organic about this (or any other Foley) interview video. And the cringe-worthy addition of the occasionally ringing cell phone just makes things worse in its transparent attempt to add "liveliness" and "real life happenstance" to the stiff, scripted proceedings.


bostonterrierowner wrote:It's called "austerity" , I think they outsource to Bollywood

Heck even a moron who wet shaves will know a superficial cut with a razor bleeds more or less instantly let alone a throat being cut through with no blood. Sunshine05 posted this very bizarre video (below) of Foley's "parents" in the Living Room forum, this is surreal from the cell phone interruptions to his rebuttal of his wife toward the end for using a present tense rather than past tense of the word held/hold. It's just totally unbelievable from his bad acting to the articulate narrative from the wife despite her bad acting. What parents could give such an interview in such a short time after such trauma as seeing their own son beheaded by a knife?

Then we have this so-called scaremongering Police warning in the UK that even watching the "death" video may be a criminal offense while there is plenty of much more real and far more sick death videos on the Internet that does not come under such warnings from the Police from various macabre websites. But now they seem to have the authority to declare the definitions from truth seeker to terrorist no matter how arbitrary their standards and lacking in logic and reason.

I have a theory that Media Fakery is just getting more stupid deliberately as the more they get away with, then the more they will get away with due to desensitization and lack of critical thinking skills by the masses who can only rely on the media for truth as well using Psy Ops to bring about Laws and social engineering to even prevent the questions against it and to marginalize and criminalize those who disagree. Is this all leading up to big one, the Mother of all Psy Ops? Space, aliens?


sunshine05 wrote:Blue and white stripes - The father of the beheaded Foley in a very bizarre interview one day after the tragedy.

That has to rank among the silliest and most absurd interviews ever given. I thought I was watching Seinfeld outtakes. Its amazing but true that people seek more verisimilitude from fiction than they do from the news media.
Top

That beheading takes the cake and the interview with the parents are the cherry on top. These ridiculous psyops have become too much!

What will it take for people to wake up to this obvious fakery?
Top

Yes, fucked again. Are people really this stupid? That situation is much more frightening than what the clowns get up to.
Top

Here's another funny Katie Couric interview with Foley's brother and sister. At 19:30 a wall picture falls on the floor behind them but neither of them blink, jump or even glance toward it. Again it is very unnatural, lots of inappropriate smiling after something so horrific.

anonjedi2 wrote:That beheading takes the cake and the interview with the parents are the cherry on top. These ridiculous psyops have become too much!

What will it take for people to wake up to this obvious fakery?

The icing on the cake is that, like all good Hollywood films, the bad guy is talking in an English accent.