Discussing the most relevant "sequels" or "reminders" of 9/11. The so-called "War On Terror" is a global scam finalized to manipulate this world's population with crass fear-mongering tactics designed to scare you shitless.
Locked
First unread post • 344 posts

Looks like some attempt at blurring the saw-blade gash in the 'yellow poles' shot in Simon's post above (image immediately below the circular saw example).

Not at all dear chap! No apology required!

"What on earth was used to literally blow up this bus. It looks like it exploded from pressure - not explosives......"

A good thread despite it's dubious credentials... Hey, who left the lights on? :P
Top

It's interesting that despite all the people walking around at the time & people living close by, there are virtually no photos of the bombed out bus. 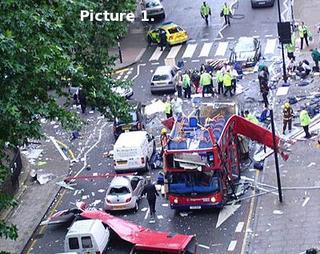 I have addressed that anomoly in the other thread - it's behind the black roadsign, just as it is in the overview photo.

I found that same overview photograph today and it is enlightening to my eyes as I can't seem to see any blood on the upper deck. In fact, one can guess that this is taken fairly close to the "event", yet there are no bodies or body parts present either.

We are led to believe that 13 people met their deaths on this bus and 80 (reduced from an initial 110) people were injured.

Maybe they were all dragged into the BMA building before the emergency services arrived. :P
Top

Further to my post above, there are many photos at this site, including another similar angle to the others above. This time, the beacon is visible behind the black sign.

I direct your attention to the bloctchy skin on both images.

Interestingly the only other person from the bus with a 'Friends Reunited' account is Neetu Jain who also attended UCL a few years before Miriam.

Both Miriam & Neetu are of Middle Eastern extraction, both feature similar post 7/7 stories, of a close relative exploring a spiritual path in understanding young mislead muslims. & both boarded the bus at Euston.


An ingredient of the 7/7 formula was to keep the emergency services at a distance.
In contrast to New York’s heroic fire-fighters, London’s were late if they came at all?


Why didn’t they come? Why didn’t they help us?
“They” are the emergency services. The firefighters, paramedics and police who were nowhere to be seen in the aftermath of the bomb. Trapped in choking darkness, passengers tore their clothes to make bandages for the injured or held the dying in their arms.


This gave the limelight to civilian / off-duty heroes
(and to plenty of scope for good, old-fashioned British complaining.)


7/7 fireman: I lay awake wondering if I could have done more


-Were genuine emergency services prevented from reaching the 7/7 ground zeros?

-Does this reflected shame have the same function as the reflected glory for the fire-fighters of New York?

i.e.
Whether it is glory or shame is not important.

The important thing is that there is a reflected *something*

This can give fire-fighters a sense that something really happened, whether it did or not:
those colleagues bestowing that shame or glory, must really exist because they have the power to reflect that status to them.

Q. Can you describe for us, please, what you saw?


not to mention being accused of taking part in an attack involving pop star Will young’s identical twin brother?
http://www.dailymail.co.uk/tvshowbiz/ar ... -chef.html

A HERO fireman honoured for rescuing 7/7 bomb victims has been jailed over a £100million cocaine ring.
Simon Ford won a London Fire Brigade Gold Award for pulling people to safety from the bus blown up in Tavistock Square in 2005.

But he has been jailed for 14 years after admitting being a key player in an underworld network that flooded south-east England with drugs.

His case can be reported for the first time after the final member of the 35-strong gang was sentenced at Southwark Crown Court yesterday.

A total of 33 criminals have been jailed for more than 200 years for drugs, money-laundering and firearms offences.

The ringleaders netted more than £100m in cash via a run-down cab firm in Paddington, central London.

Royal Oak Taxis received huge shipments of cocaine and laundered money for crooks who swapped bags of up to £500,000 for smaller notes.

Boss Eyad Iktilat, 47, lived a footballer’s lifestyle with several homes and a fleet of luxury cars, including a Bentley Continental and a Ferrari.

Iktilat was also a director of Euro Foreign Exchange, where £100m was laundered. He was jailed for 30 years.

Ford, 41, was one of 22 people arrested when more than 500 cops raided homes across London and the Home Counties in February 2008. The operation was the largest conducted by British police and followed 10 months of surveillance and bugging.

Ford was caught at his flat in Chertsey as he divided 100 kilos of cocaine, worth £5.5m, for delivery to couriers at service stations around the M25.

During the raid dozens of phone calls were made to three pay-as-you-go mobiles as underworld contacts tried to find out why Ford was late.

He said: “These criminals had been living the lives of wealthy businessmen. The lives they are now leading could not be more different.”

The network, which included convicted murderers, was linked to up to 10 gangs and had interests in Colombia, Spain, Israel, India and Dubai.

He was jailed for four years and eight months yesterday after admitting conspiracy to supply cannabis.( HUH? WTF?

It was the last in a series of 16 linked hearings that formed the biggest drugs case ever handled in London.

I've been surfing the J7 site for the latest into the coroners inquests over the 7/7 bombings.
http://z13.invisionfree.com/julyseventh ... st=0&#last

Can't help thinking that the Bus bombing was some sort of ad hoc set up covering up an earlier cock up.
Surely the bus bombing's death toll would have been known within hours of the blast along with the victims being identified.
Yet 4 days later Miriam Hyman's where abouts is still unknown.
http://www.somethingjewish.co.uk/articl ... miriam.htm

J7 in their submission to the inquest, questions why most of the victims caught the no.30 bus when they worked at Old street, & should have caught the no. 205 bus, which is the only other bus diverted, and appears to end up being in front the no. 30 bus. Then as mentioned in previous posts, 2 bus victims Miriam Hyman & Neetu Jain were graduates from UCL, along with another victim connected to UCL a current employee.


•Gladys Wundowa, a UCL staff member, also required a number 205 bus to travel to a meeting. Mr Wundowa had no idea where his wife was at this time, and it later transpired that she had "emerged from the wreckage but died 25 minutes later from her injuries, being attended to on the pavement by paramedics"15. UCL announced the death of Ms Wundowa on July 11th, two days before the Identity Commission named her, and later retracted this statement16.

In the confusion, University College London pre-empted any official statement and confirmed that one of its employees was among those killed, prompting widespread media coverage - only to retract its statement later in the day. Emmanuel Wundowa told the Guardian yesterday that the first he heard that his wife Gladys, a cleaner, had been identified as among the dead was on television.

Wundowa ... This misunderstanding came about as a result of mistaken belief here at UCL that the family had been notified by the police."

MartinL, It sounds like they use the same actor whenever there's something big in Britain. He's a big hero on 7/7 in the biggest terrorist attack, and then after everyone has forgotten his face he's a drug dealer in Britain's biggest drug bust.

I suspect that the same trusted actors turn up again and again anytime there's some kind of planned media event.

Hey look over there! Where? Here? No there!

edit/ Oh and just to add: "Interested Parties" only in the Court Room if you don't mind!
Top

For those of you following the "7/7" hoax..... and my posting this link is not an endorsement of any kind, just to keep youze up to speed.