Starbucked wrote:Dave McGowan, author of 'Wagging the Moondoggie'
has weighed in with his own take things:

Special Report on the Boston Marathon: The Curious Case of the Man with the L-Shaped Leg
May 1, 2013

McGowan wrote:... the evidence is quite overwhelming that the no-legs guy, and his two apparent accomplices, were in fact actors....
I need to be very clear here in stating that I am not arguing that no one was injured in the attack and that there was no real suffering. That is clearly not the case.

Finally, maybe more will begin to see through this insidious, shit-shovelling spinmeister that I suspected from the first time I read his bait-laced ramblings.

He is an interesting case. What are your opinions of his moon articles? I read those just before I saw the research here and was thoroughly convinced that there was no resuscitating that myth in the face the evidence presented for fakery.

But then, he completely waffles on 9/11 and now this. Maybe Apollo just a sacrificial lamb for those who have had their suspicions, since it was a long time ago anyway....
Top

Medics came in 19 sec. He lost 3/4 of his blood. During the transport to the hospital his heart stopped 7 times. Was in coma 3 days. Left hospital after 6 weeks.

Our hero Jeff was posing to photos with Bradley Cooper 3 days after with thumb up.

Quite a remarkable difference!! Of course, having studied the Bauman footage for a while now I can offer a few reasons why the two incidences were so different in outcome:

First, they responded within 19 seconds instead of giving the injured person 2-3 minutes of time to collect themselves and start to feel sad that people in the world could do such a thing.

Second, they wasted time stuffing the wounds and applying a tight tourniquet when all they had to do was simply pinch off one of the arteries with their fingers.

Lastly, and the most egregious, they opted to transport the injured person in a gurney instead of the more widely-accepted method of sitting upright in a wheelchair, without coverings on the wounds, and allowing the patient to squeeze his own thigh.

Clearly a lack of proper emergency training in the 200 mph circuit!
Top

Did you notice the tannoy you spotted before in (possibly) real pre-"bomb" shots, is also nowhere to be seen in this faked "amateur" vid either?
[ref http://www.cluesforum.info/viewtopic.ph ... 0#p2383840]

Yes Maat, puzzling isn't it? It was there during (possibly)real pre-"bomb" shots, and the day before.

Chris was 6 yards from the explosion!!!… glad you are safe back in Oakville, buddy!

"Here is a picture of happier times at the Boston Marathon… the day before the race.

Kind of cool, our group and another group of running friends from Oakville, Connor’s Runners (in orange), all met up for this picture!" Is it me or does the guy in the blue check shirt (bottom left) look a bit odd?

There are plenty of very "odd" things about it, Kickstones. http://lostswimming.com/?p=5780

The fact that it's a story promoted by/quoted from a Huffington Post article puts it in the bullshit category for starters.

And don't they seem to be trying just a bit too hard to look legit?

The Exif data includes camera & date (April 14) with the supposed "witness" holding his local Newspaper for good measure. But since I'm not a photographer, can someone tell me if it would even be possible to have that other "photographer" in focus in the foreground like that?

Yes, they appear to be trying too hard to validate the image with the newspaper and the capturing of another photographer taking the same photograph device, and the TV camera and the Tannoy and the overlookers in the podium, onlookers etc etc.. What was erected to allow the participants to photographed like that? Dig the 7' guy! Wow.
Top

Behind or in front? 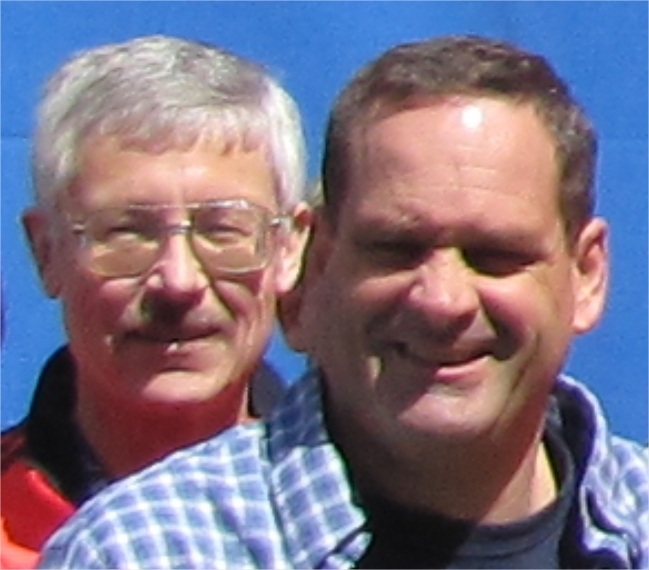 ^and that hilarious cauliflower ear!
Top

A lot of slips with the black penciled "shadows" on noses & lips too — and what's with the rainbow "ghosting"?

Boston-Marathon-group-shoop.jpg
Edit: Re the rainbowed edges, I just remembered what it reminded me of: 3D movies without the glasses!
You do not have the required permissions to view the files attached to this post.
Top

What is going on ear? The mouth is a disaster area. Look at the wrinkle also. Of course, there is a "moron" demographic out there, and it has its members (though no-one is sure how big it is), but executives seem to believe that every person who watches TV belongs in it. This may be due to something known as the "80-20" rule in business — in this case that market-research shows 80% of money spent on television-advertised products comes from the lowest 20% in terms of education and intelligence, so show-content is naturally geared towards them.

The news media is undoubtedly geared in this fashion also.

And I agree that these operations are a collective effort to interrupt the flow of free information - especially on the internet. There would be no CNN's if this situation were allowed to prevail.
Top

And the soap opera continues...

Caption: "Mary Perra gives Jeff Bauman a hug and kiss while visiting with him at at Spaulding Rehabilitation Hospital in Boston, May 5, 2013. Perra is the grandmother of Michele Mahoney, Bauman's friend that was with him the day of the Boston Marathon. Bauman says he gets visitors around the clock.
(ANDREA MORALES / Monitor staff)"
http://fotoforensics.com/analysis.php?i ... aef2.61439

Read the article if you can stand it

but this "explains" why the depicted stumps are so short now (since the initial story was "amputated at the knees"):

In Bauman’s first surgery, his legs were amputated just below the knees. ... A few days later, however, Bauman went into a second surgery and the doctors removed more of his legs above the knee. The first point of amputation right under the knee wouldn’t work well with prosthetics, Bauman’s father said.

The "granny's" thumb is melting on his ear:

Zoom in the Exif viewer to compare.
Top

One of the people listed at the funeral home address (838 Main St., Worcester) is Michelle Prunier. According to LinkedIn, she works for Maloney Properties (which is maybe how they created the name "Michelle Mahoney".
Top

And I see they've opted for the numpty spelling of Michelle with just the one 'l' - which sunshine doubly confirms.
Top

Is it me or does the guy in the blue check shirt (bottom left) look a bit odd?

Something about that entire photo looks odd. The people. Without even being analytical, if you zoom in a bit, they just don't look right. Their faces and facial expressions are strange to me. I can't exactly say what it is. I guess that the nature of sims. Intuitively, you know something isn't right.

The entire group has a copy & paste feel.

I guess we're supposed to assume there are several people taking pictures of this group since most are looking straight ahead or to the left. Look at the camera on the right. Why don't we see an image on the view finder?

OK, this is funny. Look at the very bottom of the screen, to the left of the guy holding the paper, right under the older woman wearing pajama-like? bottoms and the guy with the blue/white button-down shirt (who has two right ears, by the way). You see a finger. A large finger. As if someone's finger got in the way while taking the picture, but the placement is all wrong. It's in a curved position, as if it were holding the down the capture button, yet, it somehow ended up at the bottom of the screen.

I also can't help but notice all the large backpacks/sacks/purses in the photo. Another glaring error. Look at the black backpack next to the fence. Between the backpack and the guy in blue with shade, you see this black thing sticking up. It looks like a portion of an enlarged backpack image that got insert accidentally. On the far right side, under the camera, there's a green purse. It almost appears to be floating. There doesn't appear to be an owner attached to it. It looks like someone wearing a yellow jack is wearing the purse, but that person disappears.

The photographer in the shot, between his hand and face, it sorta looks the back of someone's head is filling the space, but it fades into blackness. Placed on the top of this "head", there are two very bizarre looking fingers.

The women wearing the blue boston jacket, next to the photographer's arm (we can't see her face). Look at the chest. The Adidas logo seems to be broken up/smudged.
Top
Post Reply
1312 posts