It does a bit resemble someone without fashion sense trying to appear as someone with fashion sense -- so yes, it's completely possible this is a fake image (artistic depiction) of what a typical agent trying to blend in to a youth scene would look like. I've been to enough protests to notice the different styles of agents without exactly understanding the whole thing. It's clear, though, that some prefer riot boots and some prefer more psychological posturing and fake personalities or blends of their real personality with some fake interest(s) to excuse their presence and/or motives. Appearances don't matter as much as their entire 'game' but this definitely looks like a fishy character. It doesn't help that it has the 'meme generator' appearance to it, either.

Is this supposed to be someone we know? Is it you? Can you stop trying to prop up your fake personality please and just post proof of your claims? I'm sure nobody cares why you are hiding behind such a thick wall of simulation but they do care that you haven't posted proof of your claims. So never mind artistic bizarre abstract depictions of what you seem to be hinting is yourself -- just post some real proof if you have it and if you're not a simulation here to waste our time.
Top

I am worried about the fact that only a few American people understand how fake this "Newtown shooting" is.

It would be good if someone takes the time to put together in a video all the absurdities of this event that we have gathered so far. Anyone?

Simon, other videos are getting a lot of plays. Even if you were only able to put together a quick video now, the amount of people looking for further information would make it go viral. No-one else has picked up on any elements of fakery other than the bad acting and the unbelievable script.

If nothing is done before the funerals end the public will loose interest due to their failure to find anything tangible. The family portrait with no legs to stand on, the early RIP Victoria Soto page, the Newton Bee early reporting - they're surely all things viewers would find tangible.

I don't have the horsepower to watch a youtube video without skipping frames, let alone to make videos. Is it not possible for you to do anything while there's a lot of interest?
Top

According to this news report there was a camera above the main entrance. Can't wait to see the footage...

It also reports on the security situation at the school, how their security was 'the gold standard', how much practice the children had with their safety drills, and just how little they could have actually seen given that the police officers told them keep their eyes closed while they were led to the staging area.
Top

http://abcnews.go.com/GMA/video/newtown ... g-17997223
Reikos family - no real tears here either, but the acting is better then we've seen. Just not quite convincing enough.
Top

resolution wrote:http://abcnews.go.com/GMA/video/newtown ... g-17997223
Reikos family - no real tears here either, but the acting is better then we've seen. Just not quite convincing enough.

Sad that we can just see the first page of the journal ... maybe cause they didn't take time to create more.
Top

Paul Simon, a native of Connecticut,  sang "The Sound of Silence" at Soto's funeral as a gesture of friendship to a family friend.  How did this friendship come about? Allegedly his sister-in-law Leslie ( married to Paul's only brother Eddie) is/was a nurse who was a great friend of Soto's mother, also a nurse.

"Today, Paul Simon, at the request of their family friends, the Sotos, performed 'Sound of Silence' at the funeral for their beloved daughter Vickie Soto. The Sotos and Simons met through Vicki’s mother and Paul’s sister-in-law, both nurses."
"Sound of Silence" is the same song that Simon performed to commemorate the 10th anniversary of Sept. 11."

So is  nurse Leslie the same person as artist Leslie Horan Simon who exhibits her photo-realistic paintings ( "There is a stillness and mystery to Leslie Horan Simon’s paintings of the East End of Long Island: here, time has been both captured and suspended; a moment, a place, a certain angle of light – shimmering morning light, stark noon light, crepuscular evening light – caught and preserved in paint) at the exclusive Fischbach gallery in NY?

"For those who are interested, you can see some Leslie Horan Simon´s paintings (Eddie´s wife) on the site of a art gallery...there is also a little bio...it mentions that Paul and Edie have a collection of her paintings (Edie put one of it on the back cover of her Picture Perfect Morning album), Billy Joel and Bruce Springsteen too..."

( NB: Paul's wife is named Edie - not to be confused with Eddie, Paul's brother)

The question we should be asking now is : Who let this footage "leak" and why ?
Top

http://abcnews.go.com/US/video/connecti ... y-17985757
Connecticut Shooting Tragedy: Inside The Family
Adam Lanza's Aunt on how she found out about the tragedy.

Personally, I didn't find anything particularly interesting about the alleged information in this video, but if you go to the link provided, watch the video, and at the same time read the transcript underneath it.

This transcript provided by ABC News (I assume) is so off the wall and bizarre, I'm wondering if it was "written" by some kind of low-grade speech recognition software. Either way, it doesn't say much about the integrity and quality control of ABC News.
Top

SIOUX CITY | Brigid and Dana Demand were driving home from Vermont to Newtown, Conn., on Friday morning when their daughter called and delivered the news. One of the country's deadliest shootings had taken place an hour or so earlier at the elementary school where the Demands sent their four children.

Brigid Demand is a 1968 graduate of Gehlen Catholic High School in Le Mars, Iowa. She met her husband while they attended college in Colorado. His military career dictated moves around the U.S. before the couple settled 30 years ago in Newtown, a city of 27,560 people about 65 miles northeast of New York City.

...Demand said the suspect's mother lived a quarter-mile from her. They reside three miles from Sandy Hook Elementary School, one of four elementary schools serving Newtown. "We have neighbors next door and across the street who have children that attend Sandy Hook," Demand said. "We checked on them and their children are home, safe." Demand worked as a nurse until retiring a year ago. She wondered what the school nurse must have faced. "You cannot get your head around it," she said. "Think of the families of these kids."

When asked if Newtown was known for any famous native sons or daughters, Demand paused and said, "Newtown never comes up, because nothing every happens here."

One day earlier, Demand's alma mater in Le Mars worked with Le Mars fire Chief Dave Schipper and members of the Le Mars Police Department in educating students on the procedures to follow in a school lock-down. "We see the need for our teachers, our staff members and our kids to understand these policies," said Lisa Niebuhr, Gehlen's development director. Niebuhr said her son, Evan Niebuhr, questioned on Thursday the need to spend time covering items like lock-down and response protocol. "Sadly, today," Lisa Niebuhr said, "we see why it's so important."

What a well-written piece of propaganda. Interestingly retired Brigidier General Dana Demand was working at the Stewart Air National Guard base where the only air defense fighters in the entire Northeastern USA were based on 9/11 (according to Wikipedia). He's also in Principal Dawn Hochsprung's twitter image feed talking to students about Veteran's day. 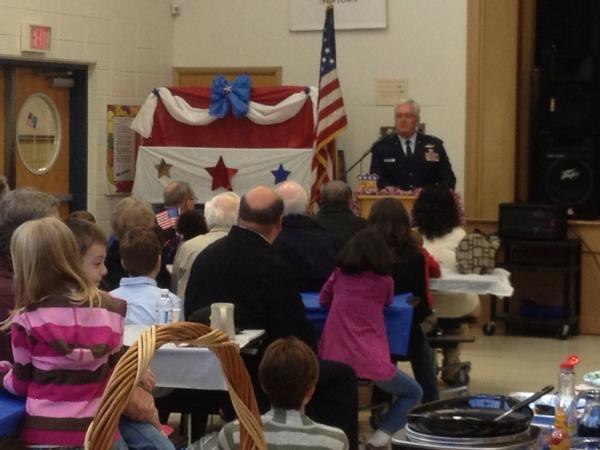 The question we should be asking now is : Who let this footage "leak" and why ?

It was on live TV, shit happens and this douche missed his cue...
Top

The question we should be asking now is : Who let this footage "leak" and why ?

It was on live TV, shit happens and this douche missed his cue...

I am still not buying it . They always give themselves some time margin when doing these "live" broadcasts . Just in case something unexpected happens

A longer version of the above clip starting with 'Emile's 'Aunt' talking the the press while wearing a bluetooth headset which I'm guessing is being used to provide her with lines. Her performance is more convincing than his perhaps as a result of this. The situation room commentator makes a point of saying that it isn't unusual for families to come out and talk to the press to remember their loved ones, as he's seen at Virginia Tech

bostonterrierowner wrote: I am still not buying it . They always give themselves some time margin when doing these "live" broadcasts . Just in case something unexpected happens

Unless he didn't know anyone was airing it live. It was shot at 5:21pm, just in time for it to make the 6pm news, where they would certainly have edited out any unecessary footage. Human error.
Top

bostonterrierowner wrote: I am still not buying it . They always give themselves some time margin when doing these "live" broadcasts . Just in case something unexpected happens

Unless he didn't know anyone was airing it live. It was shot at 5:21pm, just in time for it to make the 6pm news, where they would certainly have edited out any unecessary footage.

I am not a media insider and don't know how this cesspit works from the inside so I won't be arguing ...maybe it was just an accident

However I still suspect that it was an intended "mishap"
Top

There's something unnatural about this picture. I can't quite put my finger on it though. Or are the fingers the problem, those of the Mum and Jimmy Greene's daughter Ana M. Marquez-Greene.
Top
Post Reply
1550 posts