It was only a matter of time for lead Batman / The Dark Knight Rises actor Christian Bale to visit the Aurora victims.. There are lots more.. sigh.

As an additional note: Christian Bale, former child actor, difficult to work with, estranged from family / parents - known for his wild temper on and off set.. puppet? 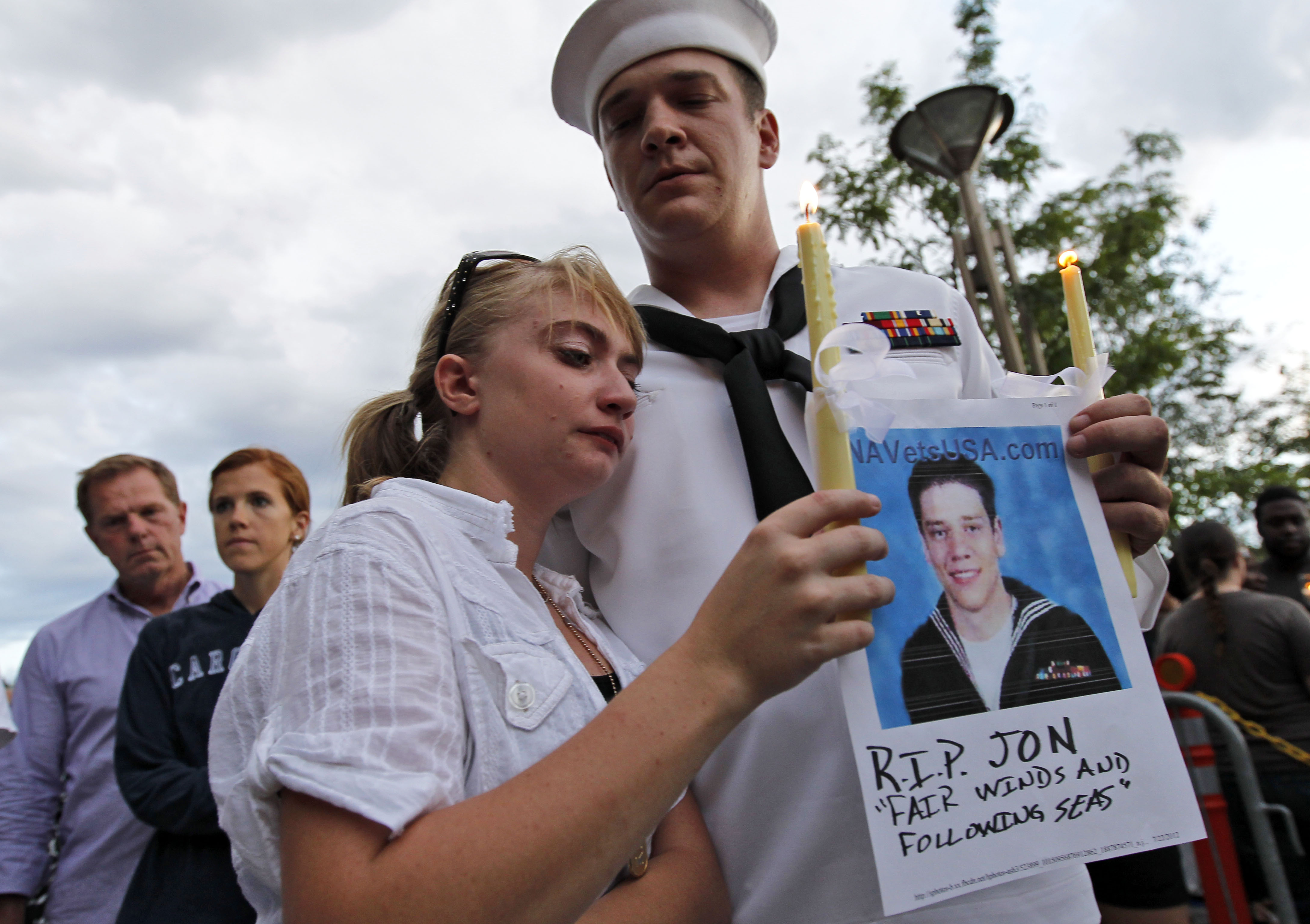 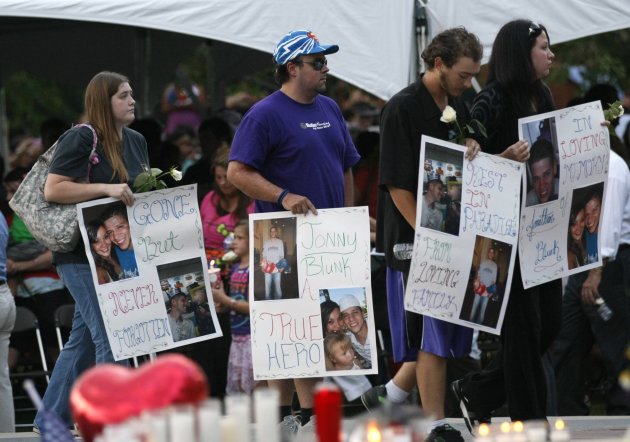 Family members of those killed in last Friday's Century 16 movie theater shootings carry posters honoring their relatives after a prayer vigil for the victims in Aurora, Colorado July 22, 2012. - Reuters/Rick Warring 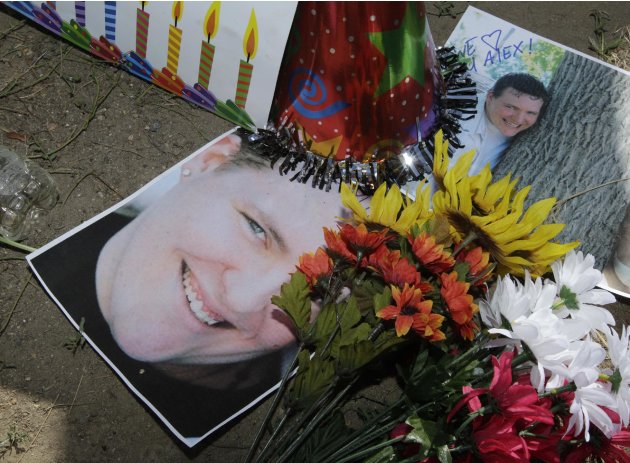 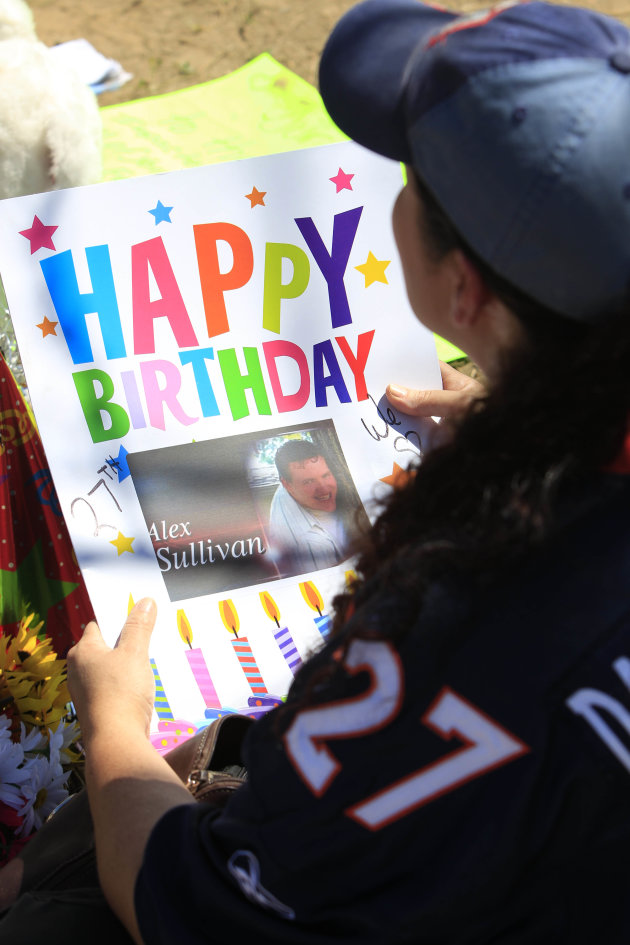 Shelly Fradkin, the mother of a friend of shooting victim Alex Sullivan, holds a birthday card for Sullivan as she places the card at a makeshift memorial near the movie theater on Saturday, July 21, 2012 in Aurora, Colo. -AP David Zalubowski 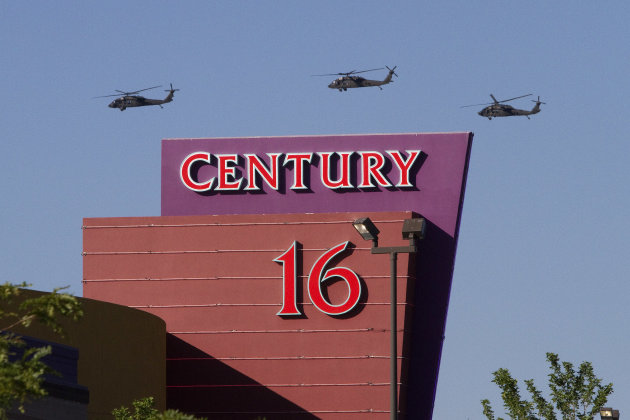 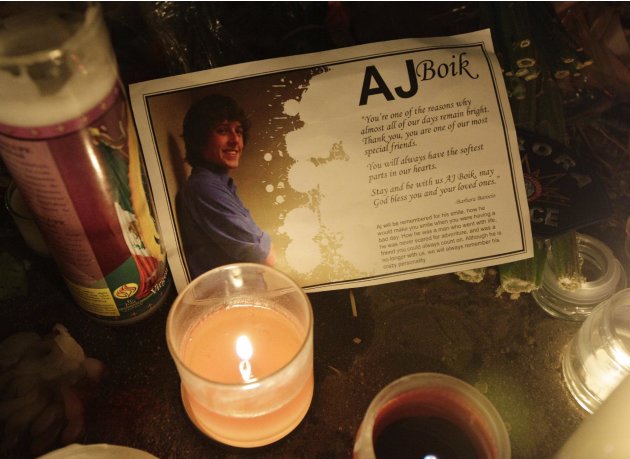 Same hand did the writing on all! I would like to suggest that we now start a debate as to just why these psyops are getting stupider and stupider.

Here's a PM someone sent me on my Youtube channel, which I think is worthy of consideration:

I just wanted to bring something to you attention about the "alleged" shooting. I've noticed that certain sites who don't talk about media fakery either by choice or force have been bringing it up with this episode.

I mean you could think positively and say that your work (and others) is finally pushing through and waking people up to the (fake) reality.

But, I get the impression such an event was perhaps used to muddy the waters even more. It's like the Perps purposely used terrible actors, a single cell phone footage (that I know of), and questionable pictures.

I've been following your threads on Giffords and Norway as they unfolded and this one just seems like its purposely trying to make people think this way.

For instance shill site Godlike Productions has a thread on it as does Jim Stone (which he claims has led to numerous DDOS etc.). I find his claims always outlandish and funny. Has cluesforums ever been "under attack"? Just seems so contrived. Fred's good pal Ed (WellAware1) also has a bunch of stuff up on it, but I'd expect him to given his role.

I just wanted to get your take on this. It's almost like they want (more) people to think this way. Perhaps in some coordinated effort to "prove" these accusations wrong later on, so that people think such a thing would be impossible (both in the past and the future)?

I have my own ideas about this - but before expressing them, I'd like to hear some of our sharpest members' opinions about just what the underlying propaganda strategy of these ever lamer psyops may be.

I have noticed a strange shift in the focus, strategy and application of late too, Simon.

There's been a definite push in recent months to join and confuse us in people's minds with a new wave of controlled/duped kooks, everything from "RH Neg blood lines" and Illuminutty "Satanist" memes to Islamophobic 'End Times' Bible thumpers.

The unusual number of new Youtubers and bloggers suggesting the Aurora incident is staged/fake was surprising until their main agenda is factored in. The tactic seems to be to associate our exposures of media fakery with more and more outlandish conspiracist and pseudo religious memes for maximum ridicule and dismissal.

I agree with LightCone that, "They know that they have the conspiratainment industry to further the media saturation through theories that only serve to reinforce fear." But I would characterize it as more of a cultural conditioning of the populace by media saturation to follow a prescribed direction, just as any promoted 'fashion' trend does. The goal is essentially commercial gain and further government control by consensus reality, self perpetuated by social pressure.

It really doesn't help to repeat emotive yet vaguely ominous "truther"-hijacked terms like "fear-based mind-control programming" though, which only tend to promote the suggestion of helpless victimology as if we have no free will, responsibility or power to choose.

TrutherInTX's analysis seems pretty much on target too: http://www.cluesforum.info/viewtopic.ph ... 1#p2372901

So of course, just like 9/11, everyone involved will gain enormous revenue — from the inevitable rise in gun sales to those worried about increased gun control, theater box office returns for a movie already doing well (contrary to some assumptions), diversionary and political mileage for Left-Right government parasites, to "victim families'" fundraisers and 'charities'. Note, Warner Bros. is a subsidiary of Time Warner Inc. "the world's largest media conglomerate."

I don't think there is any reason to assume actors like Christian Bale are fully aware of how they're being used, they'd simply respond as would be expected from anyone believing it's a real tragedy (and no doubt part of their contract that their image can be used in any way the producer sees fit for publicity).

It has occurred to me that the planners/perpetrators may have mixed up and revamped their methods just to keep us confused and guessing. e.g. It could have been a combination of physical stunt 'on the scene' plus planted actors as "gun shot victims/survivors" or entirely faked by media narrative and actor/agents alone (we'll probably never know).

However, as much as it is intriguingly enticing to speculate on how this one was pulled off, it really doesn't matter as long as we can see and show it to be faked.
Top

Maybe it's because since 9/11, the perps have gradually gained control of our society. They no longer need to put effort into staging these events. They changed the laws, they control the media, they're everywhere so they can be as obvious as they want with their fakery because we can't do anything about it... atleast that's what they believe.

Or, if there is an occult agenda behind the whole thing, maybe they are ready to reveal themselves? The illuminati/one eyed symbolism is pretty freaking obvious for the 2012 Olympics.
Top Also, as most have noted already, I, too have gained interest in the numbers deliberately pictured, particularly '27' and also the 'Century 16' image I've seen countless times in various media.

I thought I'd place the two together 1627 and Googled it. - One resulted with Denver, Colorado and the zipcode ending 1627. I've also begun looking at events in the 16th century and wondered if there is any loose connection.

I do think the boundaries are continually being pushed regarding 'tragic events' and the bar of silliness is being raised with it. "What will our gullible audiences believe next?" They may very well chuckle to themselves. I do wonder if there is an underground power struggle amongst the elite or a new 'force' is at work. We've seen some really, really poor photoshopped images as well as awful CGI work. Whether it's Norway or Libya, 9/11 or Aurora, the blatant symbolism is always in place and the acting is worsening, but people are fooling for it every single time. Is it entertainment? Are 'they' just carrying out tests for something majorly huge?

I do think these obviously staged events are designed for more than one objective. The dumbing down of people's intelligence, making them believe anything, no matter how ridiculous and control - laws - the dos and don'ts.

What's next? I predict something globally massive and extremely absurd. It's all very 'Emperor's new clothes' - however - I am certain, one day, someone will point and say 'he isn't wearing anything at all!'

Rudy Algera wrote:"Shooter" want to know: How did the movie end?

*
Just wishing to thank you all for your interesting thoughts, musings and insights about this latest psyop comedy.
I won't add much right now to the debate, as I will continue to ponder about it all - in some more depth.

Maat, regarding your mentioning "The unusual number of new Youtubers and bloggers suggesting the Aurora incident is staged/fake" - I have the following few thoughts, in consideration of the increasing lameness / more obvious fakeness of these 'mad shooter' psyops (not that the Tucson or Oslo sagas were much more credible, I hasten to say...)

In my honest opinion, the reason why they are now 'asking to be exposed' (by using ever poorer scripts and actors) has the precise objective of generating a horde of (perhaps spontaneous) "Dallas Goldbuggers", in other words, a rag-tag 'cyber army' of part-time, Sunday researchers (as in 'Sunday drivers'). Now, of course, these shooting psyops feature fake victims - just like 9/11 - and I do believe that our comprehensive exposure of the 9/11 vicsim paradigm actually does cause some concern to the perps. Thus, it stands to reason that the perps' team of strategists/ psychologists/ marketing wizards would strongly encourage a surge of manifold, conflicting conspiracy theories featuring the vicsim meme. The more, the better - as confusion and controversy has always been the most effective way to blur and defuse any given, inconvenient truth.

What I'm saying is, of course, nothing new - it's just more of the old same. The perps favorite, age-old damage control tactics have always been to 'stay ahead of the pack' and to 'discredit by association'. Will these boringly predictable tactics survive the test of time? Only time will tell...

A couple of video accounts of what supposedly happened:

He then proceeded to post this video---evidently including his wife---as an apparent rebuttal to the youtube members who had voiced doubts about his claims. Why anyone would take what is such an obviously an illogical step toward establishing credibility is beyond me. "I was there! Don't believe me? Well, here's my wife! Booyah! I should be a lawyer!".

Their response to those who do not accept their claims at face value:

There is a comment posted on the "TheCrimsonReign" youtube profile by an all but blank youtube account, "nickimthomas". It seems that both of these profiles are rather sparse and were created specifically for this reason, though I could easily be misunderstanding.

nickimthomas wrote: Hi there - I'm a chase producer with CTV News Channel In Canada. Can you please email me at nicki.thomas@bellmedia.ca re; the movie theatre shooting? Thanks.

Why would her channel not have any videos? I will look into her when I have time.

1.) The channel hosting the initial video seems to have been a legitimate account for quite some time, and is filled with lots of videos containing innocuous goofing.

2.) The audio is so low that I almost bashed my head on my desk.
Top
Post Reply
341 posts