edited to do the pagecurl on the TT poster, and reveal even more of the lovely wallpaper!
Last edited by brianv on Tue Jul 24, 2012 1:07 am, edited 1 time in total.
Top

I hope you won't mind that I moved your last two posts in the Chatbox over here!

I hope you won't mind that I moved your last two posts in the Chatbox over here!


Yes well, just for the record - and in chronological order: 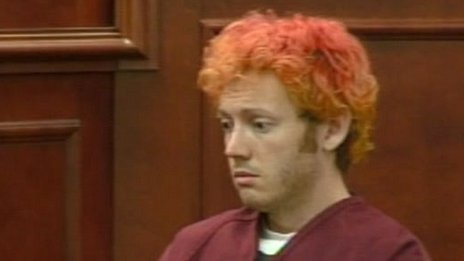 You'll have to admit this is a rather puzzling 'coincidence'! There was another killer who provided the inspiration for all these hair clowns and he's real, well maybe not the hair...

Here is an audio interview on MSNBC with Corbin Dates who choose to sit in the second row "about , precisely four seats from the aisle". Later when he talks of the gas going off he realizes it was not a "friendly gas". According to him the whole incident went on for over half an hour which at least allowed them to see more of the film. Cops reputed to be on scene in under two minutes apparently did not wish to disturb the excited film-goers.

The amazing coincidence that a training exercise for this exact scenario was taking place was mentioned earlier in the thread. Here is a source for it.


The tragedy that played out in an Aurora movie theater Friday was ironically paralleled as a classroom learning experience in a medical school in Parker the same day.

Rocky Vista University College of Osteopathic Medicine is in the middle of holding specialized classes in disaster life support for 150 second-year medical students. Along with response to natural disasters like hurricanes and floods and terrorist attacks, one of the scenarios being used to train the students is how to respond if a shooter fires at people in a movie theater and also uses a bomb in the attack.

MrSinclair wrote: There was another killer who provided the inspiration for all these hair clowns and he's real, well maybe not the hair...

MrSinclair wrote: There was another killer who provided the inspiration for all these hair clowns and he's real, well maybe not the hair...

An aquaintance of mine went bald quite young and suffered emotionally as a result. He was advised by a psychologist to wear loud trousers/pants whichever to deflect attention away from his chrome-dome. Unfortunately, he then looked like a bald clown.
I can't help but get the same impression from these photos. Is it a ploy to reinforce our perceptions of these manufactured events or an attempt to hide something?

Good call on Spector and his hell toupee. He looks like a drowned weasel without it!
Top

Ah yes, "there will be 'Hell Toupee'" is a famous meme of the American Right's political media clown & diversionary sideshow act (faux opposition), Donald Trump, aka The Donald™ — hasn't shot anyone yet (as far as we know) but certainly shoots his mouth off, and himself in the foot of course

EDIT: After watching the full clip on the ABC link, the story is that they had more than one child with them — the 'mother' repeatedly referred to her "daughter" (a toddler) being the one she was trying to keep safe while the 'dad' had the baby ("he") in his arms the whole time. So they weren't confusing genders after all.
The sob-sob performance by 'mom' is still ridiculous; standing giving media interviews after supposedly being hit with "shrapnel" up the back of her legs

Just demonstrates the need to check the material at its source before accepting edited (and editorialized) distortions that can throw us off the track and make us look stupid.

What a surprise, Warner Bros (studio of The Dark Knight Rises) are cutting the theater shooting scene from their upcoming movie 'Gangster Squad'.

Young parents going to a midnight Batman movie show with one or two sleeping babies in their arms.

The script is getting stranger and stranger ... and the female news presentator is ridiculous.
Top

Heiwa wrote: Young parents going to a midnight Batman movie show with one or two sleeping babies in their arms.

The script is getting stranger and stranger ... and the female news presentator is ridiculous.

I trust that you remember just who that female anchorwoman is. Her name is Diane Sawyer, and she's being doing this shit for a long, long time. Whenever a psyop folds out on TV, you can be certain that Diane will pop up on your screen.

In 2001 she was named one of the thirty most-powerful women in America by the Ladies' Home Journal. In 2007 she ranked 62nd on "Forbes Magazine's List of The World's 100 Most Powerful Women".
http://en.wikipedia.org/wiki/Diane_Sawyer

Diane Sawyer is an absolutely ubiquitous figure in all the psyops played out on TV for the American public's consumption. Amazingly, there are still people debating the notion that media talking heads like Diane may perhaps just be unwitting, highly paid professionals, yet totally oblivious to the monumental lies they are spreading on a daily basis.

Here's the Sawyer bitch (sorry for my "shocking" language - but let's start calling a spade a spade), the former Henry Kissinger date and CFR member who makes $15million a year - introducing one of the many fake, so-called "amateur" videos of 9/11 (at 7:10 into my September Clues part F) :

How about starting a "Waterboard Kissinger" campaign? Are you really against waterboarding such felons - for some sort of moral reasons? Really? Don't you think that a full confession from someone like ol' Heinz Alfred could make a difference? I know, many of you will not agree with this (raising all sorts of objections as to how such a confession could be certified and bla bla bla ) - but please let me entertain this little pet dream of mine.
Top
Post Reply
341 posts