And just to round off this little analysis of the ridiculous "Cygnus Disaster" imagery, here's what I would call a classic "conspiracy candy" inserted by the NASA hoaxer-clowns who, as we well know, simply relish to bait the UFO conspiracy crowd into silly conjectures.

To be sure, this little white dot which dissolves / breaks up into a puff of smoke cannot be rationally explained away as any sort of lens reflection - or other 'innocent' optical artifact. Evidently, It was willfully inserted by the NASA clowns to trigger senseless controversy and mystification - in order to distract from the fact that the entire clip is 100% fake :

And right on cue, in that video's comment section, we have one "Uncle Georgeau1" pointing out the 'mysterious white spot"...

Here's the blob as it eventually takes a "W" shape - in the "pixfire" clip: Now, get this: in YET another alleged "amateur video" of the 'CYGNUS / ANTARES explosion', the very same white, shape-shifting blob is indeed presented as - and meant to be - a random / flickering lens reflection:

"Antares Rocket Explosion from 2 miles away" - uploaded by YT user "Tim B"
https://www.youtube.com/watch?v=KOePTJ9eSkQ (watch between 30sec and 40secs) So, you may ask, what does this prove? Well, I'd submit that it proves beyond reasonable doubt that:

1: The "white blob" is nothing but a digital add-on effect (such as those available on any modern video-editing software editor)
2: The two above video animation clips were created by one and the same entity (I would dare suggest NASA's CGI team).

Needless to say, the odds of this occurring 'by pure happenstance' (identical "W"-shaped blobs appearing in two different amateur videos) are, well, not even worth talking about... But of course, anyone is free to hold their own standards of belief.
Top

I grant you it's certainly an intriguingly common 'artifact'...

Thanks, CM - for discovering a THIRD "amateur video" featuring that 'artifact'. This truly seals the matter - in definitive fashion.
There never was a "CYGNUS/ANTARES" rocket exploding - since the "ISS" it was supposed to dock with does not exist.

The stench of fakery hurts my nose - I am getting pretty sick of it, and I'm sure scores of other folks around this planet share my righteous nausea.

The NASA fakery-clowns need to be stopped, once and for all. Enough is enough.
Top

Alright - so then there were four... I rest my case - and renew my challenge to all 'NASA-apollogists' to try and debunk / explain away these four shots :

Excellent find! Reminds me of the 'W' in the walt disney logo.
Top

W as in Disney
or W as in "Watermark"

The faker is showing pride tagging his original artwork...

What a load of cods Wallop!
Top

Another hilarious video, presumably of a solar eclipse, filmed from the ISS.

Credit to Youtuber: Fakeclounds Insky for bringing this footage to my attention and to Cluesforum member michiganj who wrote on this back in 2012


"It is amazing to see an eclipse from orbit," Pettit told Mission Control while describing the event Monday. "The shadow on Earth looks just like what you see in the physics books and the astronomy book where those folks figured all that out without ever having seen what that shadow looks like."

So amazing that you decided to photograph a shadow of the event rather than the event itself? I guess Google images is just flooded with authentic pictures of Solar Eclipses from the ISS, right? Oh, it's not.

So the real question is why has NASA never photographed an actual Solar Eclipse from space, ever? Wouldn't a cosmological event as marvelous as a Solar Eclipse be one of NASA's primary studies? Wouldn't we have so many hundreds of pictures of Solar Eclipses from space by now that people would yawn at the thought of seeing another one? Of course we would, but NASA doesn't doesn't do science, NASA manufactures propaganda for public consumption.

One of the alleged picture taken by Don Pettit:

"This is one of a series of photos taken by Expedition 31 Flight Engineer Don Pettit aboard the International Space Station, showing a shadow of the moon created by the May 20, 2012 solar eclipse, as the shadow spreads across cloud cover on Earth. Pettit used a 28-mm lens on a digital still camera.
Credit: Don Pettit" I don't know what it means, but my initial impression is that one of the two objects in the picture was layered onto the other. Whatever the case may be, these photographs can be nothing other than forgeries, as the ISS is nothing more than a prop at the bottom of a NASA swimming pool.
Top

As I have mentioned in earlier posts, the perceived distance between the "camera" and the "earth" in many ISS images and videos, such as this eclipse cartoon, is patently incompatible with an orbiting altitude of 400 km. I am aware of the mesmerizing power of the space exploration myth, but I am still surprised this incongruity is apparently never noticed by astro-scifi buffs. 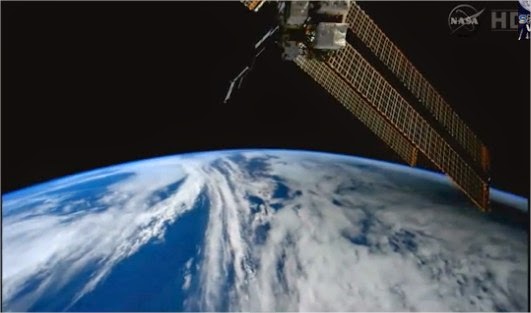 Flabbergasted wrote: As I have mentioned in earlier posts, the perceived distance between the "camera" and the "earth" in many ISS images and videos, such as this eclipse cartoon, is patently incompatible with an orbiting altitude of 400 km.

I agree, the perspective is extremely odd; unfortunately it seems that perspective is one of those things that doesn't really matter much until after one becomes aware of the outright absurdities found in media fakery.


I am aware of the mesmerizing power of the space exploration myth, but I am still surprised this incongruity is apparently never noticed by astro-scifi buffs.

Exactly. They know more about NASA's theories than NASA's employees do, yet they fall one-hundred times harder for NASA's bullshit. I think NASA has literally become their religion, and "science" their God; not a new sentiment by any means, but one that you might have just put into perspective for me.
Top

It looks like they are "3"s inserted to form 3333, well you know how these things go.
Top

The new replacement ISS crew Samantha Cristoforetti, Terry Virts (?) and Anton Shkaplerov toy with their food (and their families) during a somewhat more zoomed/home video styled offering. Well worth watching this whole segment, the 'families on the ground' footage is interesting as well.

What happens at 7m57s , to the crewman coming down the pipe behind Samantha? Is it me, or does he evaporate into the floor? Simon, does the Italian family member say "there's a man at your back?"

The video differs from much of the standard ISS footage in that it: attempts to depict depth of field; has old crew seeming to act as camera operators; has girls without long hair; has families on ground. Curious food cans/spoons/taco theme.

Here the new crew prepares for ascent
full link: http://www.youtube.com/watch?v=IdwOQPuZQhk...How common is depiction of the pre-launch crowd interaction? The curious 'blinking blessing' with the crucifix is weird -presumably the Russian Orthodox clergy do just bless everybody?

Note the odd flash photography effects, with the midline splitting - is this a sensor artifact, or a much deeper indication of unreality?
Last edited by icarusinbound on Thu Dec 11, 2014 12:26 pm, edited 1 time in total.
Top

All he did was let go of the spoon and it flies off to the left as if self propelled.

Did somebody trip over the wire holding up the spoon?

*
Well, dear Icarusinbound - firstly, I am pleased to see that NASA seems to have solved the vexing problem of flapping / upright-standing female hair: apparently, a shorter / trendier Italian haircut style does the trick !

And no, as that crew member ducks down behind her, Samantha's mother doesn't say "there's a man at your back" - she just says "we are always close to you even from down here". Now, as you can see earlier in the clip (at around 2:22) the man ducks down through that door held open by his fellow asstruenot: The thing is, the next time he does so (at around 7:57) - that door would appear to be closed... As it is, we can see the closed door at 6:45 - and we can see it again (still closed) at 8:17. Terry Virts seems far too busy playing around with his spoon (thus, he isn't likely to be the 'doorman') so we would have to assume that the ducking crew member opened and shut the door behind him all by himself !

Yes, Lux - the food does appear to be self-propelled. But remember: it is NASA food !

Simon/Lux, does Virts' headset cable go into a crazy spin-wiggle at the same time as the haunted spoon darts over to the left? Note that as depicted, the spoon movement catapults the food.

But the cinematography framing tracks that, up top left.

Note that particles of food, razor-sharp tin cans and taco shrapnel seem to hold no fears for the modern cosmonots. Apollo diners had to suck their baby-food through tubed sachets, and live in an industrial clean-room, by comparison....as did Skylab dwellers.

There's also a strange lack of bluetooth or other wireless connectivity for headsets and hand mikes....but to lose that signature movement of cabling would take away from the overall effect
Top

Note object entering lower left of frame @ 3:38 that looks an awful lot like a moth or other flying insect.