If NASA faked the moon landings, does the agency have any credibility at all? Was the Space Shuttle program also a hoax? Is the International Space Station another one? Do not dismiss these hypotheses offhand. Check out our wider NASA research and make up your own mind about it all.
Post Reply
First unread post • 33 posts

NASA has tons of pictures of earth from space. They are widely used by the media, in school books, by weather services (so we are told) and by "response teams". Many are said to be taken from the ISS, others from satellites. I figured a discussion on all this imagery would take up a lot of space on the ISS thread, so I started this one. If there is better location for it, please move it.

Below are some pictures of Mount Etna during different eruptions. I admit they caught my eye because they reminded me of the satellite pictures of the smoke from the WTC traveling in an almost straight line (at least in some versions) to infinity and beyond. 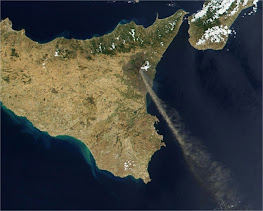 2001 (cropped). A semiarid Sicily. At http://epod.usra.edu/blog/2001/07/mt-etna-eruption.html
Said to be captured by the Terra satellite. 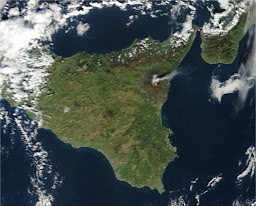 2011 (cropped). A lush green Sicily. At http://earthobservatory.nasa.gov/IOTD/view.php?id=48612
Said to be captured by the Terra satellite. 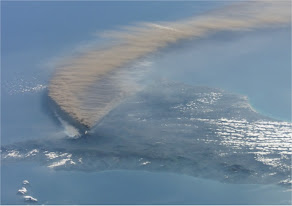 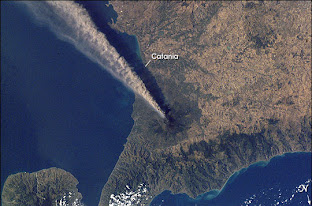 Since this thread is dedicated to pictures of earth from space, here is the mother of them all:
http://cluesforum.info/viewtopic.php?f= ... 5&start=45
Top

New Zealand can be seen in the bottom left of the image, while newborn Tropical Storm Evan can be seen to the north, sitting about 145 nautical miles (268km) west of Pago Pago, American Samoa.

They both look fake to me. That is, non-photographic renderings of some kind.
Top

according to this picture electricity hasn't found its way to 99% of africa yet. what a shame!

i also find it pretty strange that we see a perfectly round earth here. shouldn't planet earth be seen as an ellipsoid?

Mexico City, Mexico, and Paris, France, with no clouds above seems to have had a power cuts too!

And poor Portugal Atlantic coast is all lit up like a Christmas tree.

Yes, it's ludicrous. Also, the entire Nile is lit up. Seems there is more activity around the pyramids than in São Paulo! I don't think any of this would be visible from such a distance, but of course I could be wrong.
It's just that if the "camera" settings allow to see the city lights along the Red Sea so clearly, how come you can't see any stars just beyond the curvature of the Earth?

This WikiNasaPedia illustration of orbital altitudes of satellites might be useful for the discussion on this thread: http://upload.wikimedia.org/wikipedia/c ... itudes.jpg
(the moon is about 60,000 km too close to Earth, probably for the sake of convenience, but anyway...)

The picture of the Earth on December 12th is probably intended to represent the magic 35,786 km figure on the orbital altitude map. And, yes, I don't see why we should see much of anything on the night side. Again, if the "camera" was adjusted to extreme low-light conditions, there is no excuse for the absence of the stars.
Top

Again, if the "camera" was adjusted to extreme low-light conditions, there is no excuse for the absence of the stars.

Yes, Flabbergasted I mentioned this in the satellite thread but didn't have time to post the image!

What the heck is happening in North Italy, even the mountain ranges have lights!

Those pics look so fake! Imagine how hypnotized you'd have to be to believe they were actual photos of the Earth!

I wonder if these images of electric power consumption are intended to prepare certain nations for the brave new world of carbon credit!
Top

The former British National Space Centre used to publish exotic 'satellite' images of Europe many years ago: I am thinking perhaps mid-1980s, which were sold as expensive semi-arthouse prints.

I cannot remember which satellite was claimed to be the source, but the important point is that BNSC back then justified the impossibly-clear cloudless pictures as having been a 'mosaic composite', created from multiple shots taken over many months. I'd be prepared to bet that something like this (or a modernised version) will be the explanation for this alleged current world-pic.

Let's think more deeply about the source of these international lights. Streetlights during nightfall. I wonder if the aggregate per-city spectrometric color is consistent with street-light (sodium vapour) and/or neon mixtures? This technique can be supposedly applied to indicate within a few percentage certainty the elemental composition of distant stars and planets- it can be retro-applied to pictures of earth, surely? Or perhaps could be applied, if this was not such an obviously 'enhanced image'.

We see the solar terminator supposedly over the Pacific, so let's say that it's already sunset in Hawaii, whilst the world spins like clockwork from west-to-east. Presume that this was 16.00hrs local time this evening (UTC -10hrs). When we look at the hemisphere as presented, why is there so much of the world in darkness that we can see?

If it was sunset just west of the western coastline of the Americas (which is how this is depicted), that would be 150deg west of the Greenwich meridian, but sufficiently-close to the west coast of the USA to justify the streetlights to be lit (as per the picture), so let's say that it's roughly 18.00hrs in Alaska/ almost into California...again because they are purported to all have their street-lighting lit.

But if we then look forward to the west coast of Portugal, they would be at midnight 00.00hrs (UTC -1hr)...(what the hell is happening further east, with that enormous straggle of lights in Egypt??) ...why do we see the Arabian penninsula in total darkness, since if it's midnight in Portugal, should it not be headed for morning, maybe 05.00hrs??.

And..can we see all the way from more than 150deg west of Greenwich, round to about 60deg east?? That we can see more degrees of the world in this picture than the 180 we should just be able to? I'm just basing this on rough estimates from flat maps, I don't have a real physical 'home globe' to compare with.

Also- this may just be perspective, but is Greenland not too far away from north-eastern Canada? Or under-sized??

Finally...I'm gettin a bit of a porthole effect, when I look at the night-world shot. Probably just an optical illusion, but at least that would help explain why a circular shape is being seen instead of an oblate spheriod...
Top

I am not sure about Greenland, but on regular flat maps it is wildly oversized due to unavoidable map projection distortion (it looks the size of Australia but is really only one fifth of it). The distortion could have been in favor of the southern hemisphere but, historically, cartography has always been a eurocentric business ...

I don't know what could be obtained from spectrometry analyses of city lights painted in with a mouse (they even made them fade into orange in the Middle East!), but it could certainly be tried.

Also, for some mysterious reason, the Mediterranean and the Gulf of Mexico are darker than the Atlantic. Maybe it's because they are so deep!

And what's with the extensive cloud cover over the Sahara? And nowhere else? Oh, I forgot: it rains there all the time!

It may appear a waste of time to go into so many details in examining what is obviously a cartoon, but I think it will help identify and prove earth-from-space photo fakery in the future. We will eventually arrive at a set of undebunkable arguments, like the key problems with the moon images (fading sunlight, equal slow-motion in all directions, etc.).
Top

NASA's images of other planets seem equally fake to me. I guess we don't really know what any planet really looks like.
Top

Here is John Glenn's view of the Earth from space while aboard the Mercury Friendship 7 in 1962:

From 3:16 to 3:21 is that condesation on the window of the alleged 'spacecraft' and if so is it on the outside or the inside?
Either way, wouldn't that be an odd thing to happen in such 'controlled' atmospheres?
Top
Post Reply
33 posts