If NASA faked the moon landings, does the agency have any credibility at all? Was the Space Shuttle program also a hoax? Is the International Space Station another one? Do not dismiss these hypotheses offhand. Check out our wider NASA research and make up your own mind about it all.
Post Reply
First unread post • 71 posts

Simon, I've often tried to visualise how this would work out for spacing, and for me your composite shows the impractical cramped squeeze the cosmonuts would suffer so clearly.

To me, whether it's the classic Apollo LEM with those suited/booted/backpacked footballer jocks implausibly jammed inside a tiny tin, or this bonfired Russian doll's house, where is the practical reality? The inhabitants of any such capsule would receive physical impact forces (irrespective of parachute deceleration) that should justify much-larger capsule sizes- the lack of internal separation to protect the inhabitants from g-forces on hitting (and bouncing) just adds to the unrealism of all of this.

Here's a thought- on the basis that Americans and Russians spacemen are fundamentally the same species, can we make a composite picture showing the (presumably larger) Apollo capsule overlaid with this tiny Russian barbecued salt-shaker? I know that we're almost comparing unicorns to griffons here, but it might be informative. The Americans claimed to have their intrepid explorers on their backs for exit from and entry to Planet Earth...that looks even less likely for these Russian oven-fried travellers when we see their body sizes.
Top

Three more asstronuts, incl. a lady, are getting down on Sunday 18 November from the ISS using the Soyuz tin capsule.
http://www.nasa.gov/multimedia/videogal ... =155527781
The show must go on!


“It’s really tricky because we're going 17,500 miles an hour and we're going to go back to zero and we're going to do that by braking through the air. That means using the air to slow us down. It generates a lot of heat. The heat shield … not just glows … it actually melts off. An ablative heat shield. Our whole capsule is coated in it. And, it's just amazing. Once we do our de-orbit burn that's really important. It takes about 3 minutes to slow down. Once we hit the atmosphere and start to slow down it's just an amazing ride. I can look right out the windows and you can see the ablative heat shield melting. You can see the plasma ball that you're traveling through. And you're slowing down.”

What are the windows made of, I wonder? What prevents the thousands of degrees of heat from conducting through them to the interior of the capsule?
Top

It's a preposterous fairy tale.
Top 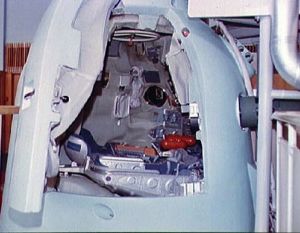 Above is the Soyuz crew module (mock up with side door). The heat shield is below the bottom of the crew module. A habitation module is above and a service module is below. The SpaceX Dragon spaceship is similar.

Getting into orbit the modules are accelerated initially straight upwards to 7 800 m/s velocity in 480 seconds (by external rockets) - the average acceleration is 16.25 m/s² - and you are pressed into your seats. No seat belts are required. If you accelerate straight up, you will reach 350 000 m altitude in 71.5 seconds and continue upwards, so evidently you have to turn before getting up to 350 000 m altitude to an orbit, circular course around the Earth and for this you use the rocket engine in the service module. Then you can chase the ISS and dock. Easy as a pie according to NASA.

Getting down is almost the reverse. It only takes a little longer. You undock using the service module rocket engine and use that engine to get a push out of orbit circle of and away from the ISS and start to descend ... at increasing velocity due to Earth gravity. Then you drop off the crew module above (so that it will not obstruct your parachute deployment later) one way or another. At altitude 130 000 m and a total speed of 9 000 m/s you apparently drop off the service module below and position yourself with the crew module bottom in the direction of flying with the heat shield between you and the crew module.

Deceleration is average 5 m/s², that pushes you into your seat for 1 800 seconds. No seat belts are required. You land backwards with your ass facing seat and the heat shield below you, etc. If the mass of the module is say 2 000 kg the average force acting on the heat shield is 10 000 N only due to friction and turbulence during 8 100 km descent. Isn't it marvellous?

How you know where you are during the 8 100 km long parabolic descent (about 1/4 of the Earth circumference) through Earth atmosphere getting denser and denser is beyond me - but it seems you enjoy the ride and look out through the windows and see the molten metal from the heat shield flying by. Soyuz lands in Kazakhstan of all places. SpaceX splashes down just outside Los Angeles.

If you try to push a button on the control panel for any reason (what could it be?), you must remember that 5 m/s² deceleration is acting on your hand/finger all the time. Everything loose will be glued to the floor of the module. You are thus looking back/upwards while decelerating - landing backwards.

It is a nice good night children's tale.
Top

Here is a funny report how the ISS astronuts return to Earth. They say goodbye to the other asstronuts up in the ISS, slide into the Soyuz capsule habiation section, a hatch is closed, then puts on their space suits in the Soyuz habitation module, then undock the combined Soyuz habitation/command/service module, drops off habitation and service modules after been given a push down and, voilà, only the little command module lands on Earth a little later - at night in a very remote place in Kazakhstan out of the eyes of the public. The ground staff has great problems to open the hatch, then gets the paperwork and instruction manuals out of the way (?) and finally the three asstronuts are pulled out:

What a stupid show!
Top

Yes. In the near future space travel and re-entry will be a piece of cake. You simply go up via space elevator or a balloon or take an aircraft that spits you upward toward the stars. Then, to return, you just strap on a parachute and jump!

No more need for those huge, expensive fake rocket ships. As the population gets stupider and stupider, the hoax budgets will get smaller and smaller!

Want to start a pool on the year they just fold their arms and nod their heads like Barbara Eden on I Dream of Jeannie and disappear to the ISS? Cut and print!
Top


The thermos-size metal container holding the nematodes [worms] was housed inside the locker of a crew compartment that was reinforced specifically to protect the materials inside. Once that compartment ruptured, however, the nematodes still survived the crash to Earth thanks to the locker's build, Szewczyk said.

The [worms] stayed alive upon impact because by the time that part of the shuttle fell to the ground, it had already decreased in speed, allowing the nematodes to touch down more gently.

I wasn't aware that falling space objects gently touched down on the ground due to their slowing down all by themselves. Amazing!

So, I guess they don't even need parachutes any more for their returning space vehicles. Just a well built locker and faith in the slowing down of the descending craft by the time it gently touches down on the ground.

Iran sends monkey to space and back.

Re: Re-entry - brushing your teeth

One very IMPORTANT question of space travel is, of course, how to brush your teeth in space. Your teeth must be brushed prior re-entry. Unless you remove all your teeth prior departure space and replace them with loose ones. I just came across some info about this IMPORTANT matter. How to brush your teeth in space! http://www.amazon.co.uk/gp/feature.html ... 1000114173
It seem a German named Braun invented the space teeth brush and sold it to some Americans that took it to the Moon!

Oral-B becomes the first toothbrush to go to the moon. Oral-B brushes were on board the Apollo 11 mission, the first moon landing.