Anyone who has researched or studied the 9/11 hoax will have concluded that the 1993 "attack" was a required element to this hoax. It enabled the perps to clear the towers of any remaining genuine tenants and gave them total control of the infrastructure and office space to do whatever they needed to in preperation for September 11. The question is, did they also use it to "trial" some of their future ideas such as the fake victims?

On a recent visit to the 9/11 Memorial site, I noticed a new category had been added: February 26, 1993. I have to confess, I wasn't aware of the official casualty numbers from back then so I took a look at the victims - there were only 6. Of these 6 only 3 have a picture to their name.

The first victim I looked at was Stephen Knapp. I was drawn to his photo as it reminded me of the type we saw after 9/11. Not great quality, but also because the shadowing on his face seemed to contradict the light on the rest of his body.

Curious, I searched for more images and found an uncropped version at an online newspaper site:

Our friends at Voices of September 11 had a better version of this: It's also worth reading the tributes on here. They have a familiar ring to them.

Not for the first time one has to ask, "is this the sort of photograph that a family would hand to a news company to remember their loved one?" Furthermore, we know from this version that the previous version has been altered. The contrast/brightness has been adjusted and they have tried to make the photograph even more damaged and creased! The lighter version also reveals a strange white line under his beard - a sign of a cut and paste?

A further search revealed one more photo at the same online newspaper as the previous image:
http://www.silive.com/september-11/inde ... great.html

Once again we have the "ripped/worn" edge of the photograph - though quite why someone would rip the photo in half when it is clear that his wife/partner are next to him is another matter! Additionally, it looks to me that the watch has been added. Same with the glasses to his chest - suspended in mid air with no visible means of support!

I was also drawn to the eyes as they looked strange, so I zoomed in and took this screenshot in Photoshop. 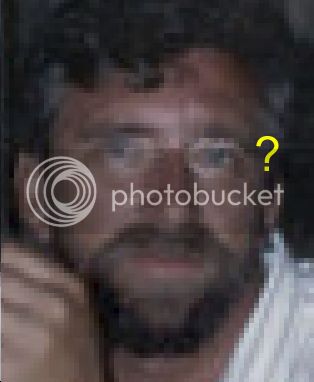 The eyes have definitely been tampered with. Why?

I was surprised to notice that apparently we don't have a dedicated thread to the 1993 WTC bombing! I thought I had posted in one in the past but I guess this is a topic that surfaced in many places but never found its specific thread of research. Maybe I am missing something. Anyway I hope it is OK if I am moving this thread from the living room to the "general 9/11 affairs", considering the obvious connection between this drill event, its consequences, and the great scam that followed.
Top

They clearly got away with the 1993 event with no questions asked, and it built their confidence for the 2001 bullshit. I'm surprised we hadn't resurrected this topic on its own before, too. Thank you!
Top The six alleged victims of the 1993 WTC BOMBING :

According to this book ("Terrorism 1992-1995"), 'Wilfredo Mercado' was "found frozen two levels below the site of the explosion" on March 15 - seventeen days after the event... Note that 4 out of the 6 alleged victims reportedly worked for Port Authority which, of course, owned the WTC at the time.

I believe there can be little doubt that the 1993 "truck bombing" of the WTC garage was nothing but a test run for 9/11 - that it provided a convenient pretext to evict/ and 'get rid of' all inconvenient tenants who were not invited to participate in the con-scheme (and share the profits of the 9/11 'vicsim bonanza') - and consequently, that the reported "6 victims" of 1993 were just as fictitious as those of 2001. I have compiled below a list of relevant links to some of our previous research concerning the February 26, 1993 "WTC BOMBINGS":


THE WTC's DECLINE AND EXODUS
http://www.cluesforum.info/viewtopic.ph ... 6#p2073196
...an old 2010 post of mine wherein you'll find this priceless excerpt from Eric Darton's WTC biography "DIVIDED WE STAND":

"The February 1993 blast in the basement of the World Trade Center
killed 6 people, injured 1,000 others, displaced 50,000 workers, and
threw 900 Vista Hotel and Windows on the World employees out of
work, but it also provided a modest boost for the regional economy. [!!!]
This, at any rate, was the conclusion the Port Authority came to in an
April 1993 report released six weeks after the bombing." The lady who allegedly functioned as a liaison with the six 1993 victims' families, "coincidentally" lost her brother John on 9/11 ! Anthoula - who "lives and works in New York as an actress" - is now also a board member of the 9/11 National Museum and Memorial...
http://www.911memorial.org/10th-anniver ... g-campaign
I did actually mention Anthoula Katsimades in this 2009 forum post:
http://www.cluesforum.info/viewtopic.ph ... y#p1016013

1993 DAMAGE DRAWING
Here's also a pretty ridiculous drawing (from Wonkypedia) depicting the supposed damage sustained by the WTC.
Yet another piece of the perps' forceful public conditioning to the notion that the WTC was made of cheesecake?

According to the Social Security Death Index, only John DiGiovanni officially died on 2/26/1993 at the age of 46.


"It felt like an airplane hit the building," said Bruce Pomper, a 34-year-old broker.


It's also interesting to note that on 10/8/2001 (barely a month after 9/11) A&E Television premiered Minute by Minute, a new "weekly series that reconstructs contemporary events through the eyes of the people who were there ". Its first episode "planned and produced over the past year" was dedicated to the 1993 WTC Bombing. That was the first mainstream media "documentary" that included allusions to the "9/11 Terrorist Attack" (just at the end of the show).

Whoa. I just watched that episode of "minute by minute". Strange intro for sure (watch the two towers on either side of the host complete with mechanical floors, combined with the chrome "steel girder" tv stands. What's with the crazy "eyeball" video inserts on the screens? Very interesting video. I particularly enjoyed how, at the end of the "documentary", they tied each heroic participant from their 1993 story into a cool "Fast Times at Ridgemont High" title card. It reminded me of the end of that Van Halen video, "Hot for Teacher".
Top

Game_Over wrote:Whoa. I just watched that episode of "minute by minute". Strange intro for sure (watch the two towers on either side of the host complete with mechanical floors, combined with the chrome "steel girder" tv stands. What's with the crazy "eyeball" video inserts on the screens? Very interesting video. I particularly enjoyed how, at the end of the "documentary", they tied each heroic participant from their 1993 story into a cool "Fast Times at Ridgemont High" title card. It reminded me of the end of that Van Halen video, "Hot for Teacher".

The most memorable quote in the ending is related to Alan Reiss:

"Alan Reiss, Director of the World Trade Center, was trapped in the rubble but was able to dig his way out"

In this surreal interview in NBC the morning of 9/11 Reiss tells his ludicrously stupid tale along with an embarrassed PANY Police chief. The whole interview is full of bizarre quotes and moments.


"How many people worked in the twin towers buildings?"


"How many people worked in the twin towers buildings?"

The single digit 2 made me think of some fundamental '1 versus 2' factors, some of which are so obvious, but largely-invisible due to the familiarity we have to the subject: We, that are trying to be awake to the insanities of 9/11.

Obviously it's a truism to say that the intended (and effective) significance of the as-depicted stage-show was more than twice the psychological impact of just, say, hitting a site with only one tower, or only one of the towers at the WTC location. But I now wonder...did the sequence of images purport to show identical collapse dynamics? If so, would that be truly the case, in the real world that the imagery was meant to be displaying?

Also- how many other Twin Towers are there, in the world?? Any, at all?? Or was the WTC a unique duallity of structure? Do we know if WTC1 was completed before WTC2, vice-versa, or was it a parallel build? And did they 'fall to earth', as twins might do, in observance of age (ie was WTC2 the 'senior tower'), I mean in the discharge of a fairytale narrative?

And how much/(any?) of the reporting following the 'hit' on the first tower made any predictions as to the second going to be getting hit?? Was their any uncontained over-enthusiasm that pre-empted the videographic extravaganza???

Finally (for now)..."2", as in the second. Was the 9/11 attack sequence in any way a repeat of the way in which damage was reported/emphasised back in 1993? Did history, as recorded if not truly observed, repeat itself??
Top

icarusinbound wrote:Also- how many other Twin Towers are there, in the world?? Any, at all?? Or was the WTC a unique duallity of structure? 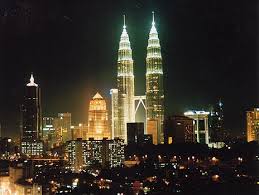 "In Malaysia, bomb threats forced the evacuation of major buildings in the capital of Kuala Lumpur, including the 88-story Petronas Twin Towers, the world's tallest building. Several thousand workers and shoppers poured out of the twin towers in the morning."
http://www.nytimes.com/2001/09/13/news/13iht-a4_21.html

Viterbi - that video clip is vintage gold - some would say comedy gold! Not a speck of dust on either of them.

Also worth watching the over animated hand signals of Hall when he is describing what has happened as well as the rubbing together of his hands (in relief) when he has finished his part of the story.

Simon - you have got to add this to one of your "actor" videos!

These (29 cents?) postage stamps were apparently issued in the wake of the 1993 WTC bombing 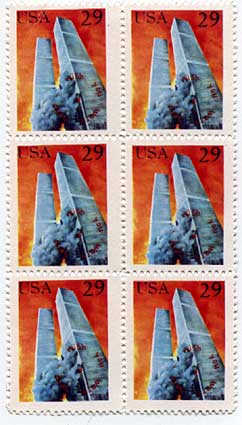 Of course, if I point out that 2+9 equals 11, chances are some people will call me a "whacko conspiracy theorist"...
Interestingly, I found the above stamps on none other than Eric Darton's own website: http://www.ericdarton.net/a_living_arch ... mages.html - where he's uploaded a whole bunch of WTC memorabilia graphics/ads/and posters.


But my 'favorite' predictive programming crap from the 1993 bombings is this howler - found on a BBC article: There can hardly be any doubt any longer that the 1993 "Alqaeda bombing" was intimately correlated to 9/11 - and provided the perfect pretext for the Port Authority to 'evict' all of the Twin Towers' historical tenants and office workers - as clearly stated in Eric Darton's book "Divided We Stand". Subsequently, a handful of banking companies complicit with the upcoming 9/11 scam 'repopulated' (on paper) the towers with a number of VIRTUAL office workers - destined to "tragically perish" on September 11, 2001...
Top

Weird, and Pomper looks like "prompter" - as in one who cues or signals others to action.
Top

hoi.polloi wrote:Weird, and Pomper looks like "prompter" - as in one who cues or signals others to action.