AmongTheThugs wrote:So Jake Burns of Stiff Little Fingers just unfriended me on Facebook because I posted the pic that Simon captioned. Punk is dead.

Why do certain 'entertainers' feel the need to verify these blatantly staged charades? First Eels front man Mark Everett told everyone that his cousin Jennifer was a stewardess on the plane that crashed into the Pentagon on 9/11.
And now -
Aerosmith guitarist Joe Perry said his children were a mile away from Monday's marathon blasts and claimed their friends were among the victims.

"It was really tough getting on the plane I have to say because the news was just dribbling in," Perry said at a press conference in Sydney.

"As they were putting the body counts on the TV we were in the waiting room to get on a plane and fly how many hundreds of thousands of miles away from where my kids are.

"They were both watching the race and both of them have lost friends. I'm still digesting it."

Are these "celebrities" told what to say or are they still hallucinating from all those hard drugs?

This pair of "double pulse check" photos would have had to have been shot one right after the other. That is, if they weern't so unbelievably fake! The perspective problems with these two shots is mind boggling!:

AmongTheThugs wrote:So Jake Burns of Stiff Little Fingers just unfriended me on Facebook because I posted the pic that Simon captioned. Punk is dead.

That's rich coming from an asshole who made money from crap songs like "Suspect Device". The band thought it funny to package the single disguised as a cassette bomb!

Punk was dead the moment the played their heavy metal shit dressed as punk.
Top

One of the suspect : 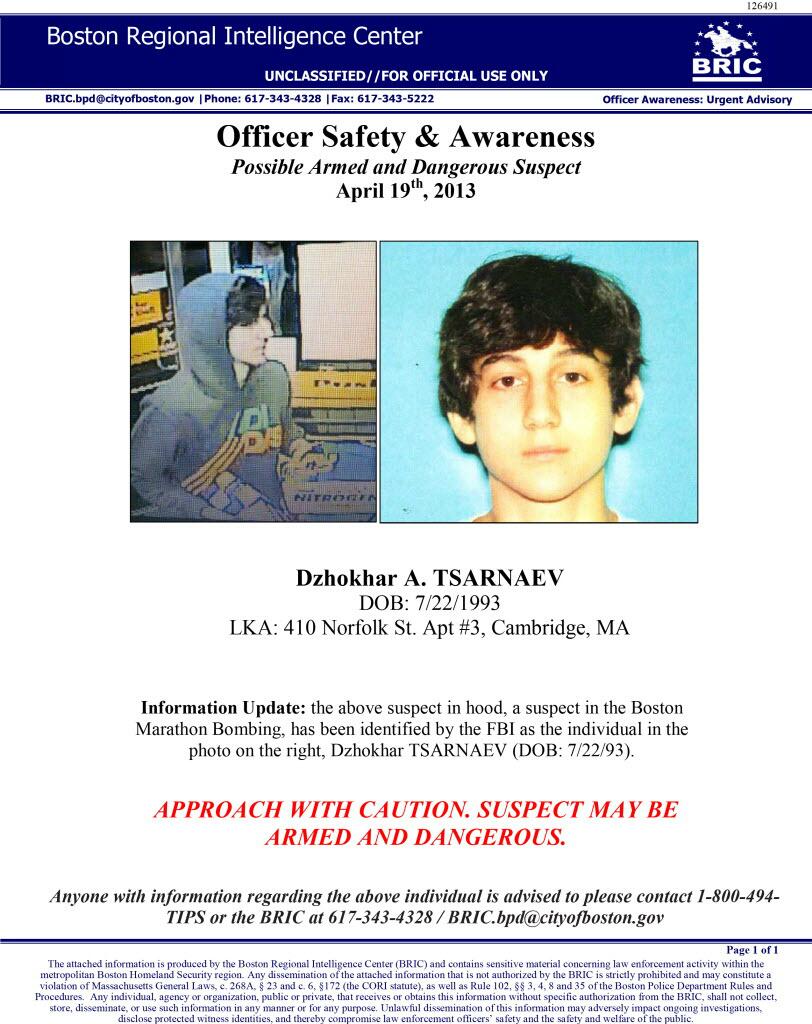 There is a human hunt in Boston to find this guy ( suspect number 2 )
The number 1 is dead in the hospital gunfire...
Top

Oh boy. So this is now officially a "muslim" terror attack? I wonder why Chechnya...

[ EDIT: among the "terror attacks" attributed to Chechens, the Domodedovo airport attack in january 2011, abundantly proved to be a hoax, here: http://cluesforum.info/viewtopic.php?f=24&t=781 ]
Top

Haze wrote:One of the suspect :

There is a human hunt in Boston to find this guy ( suspect number 2 )
The number 1 is dead in the hospital gunfire...

The FIB clowns must be getting desperate. I'm guessing that the first name is pronounced "Joker", also notice the allusion to explosives in the fake photograph, with the word "Nitrogen". How very convenient.
Top

Two dates in the notice:

She looks as though she is strangling them ? It reminds me of a painting, though I don't know yet which.

It isn't Bosch I don't think, but as with all US soap operas they are all 'cleaned up' versions of a known horror which once touched us to our very core but in the sanitized version, of course, feelings too are sanitized, made comfy and it is only a 'Movie'. Reality is only a Movie. The Lie, That Lie, that ever present Lie. It is all and everything it is God .................... completely topsyturvy

They seem to be simulating at home that which they are doing abroad. So that, on some level, as people realise 'Oh it isn't that bad' 'Look how well those brave American parents cope with the brutal death of their babies, as compared to the wailings and screamings of Palestinans and other second class humans, as well as animals sometimes, so that we all to some extent are becoming even more detatched from our sensibilities and so dehumanized even unto our own and perhaps even from ourselves.

As well as more people staying within the 'safety' of their homes, self imposed imprisonment. How delicious for the Prison Guards for all peoples to be trained from birth to be Institutionalized.

( In 1800 a Major Peter Leballiere insisted he be buried head first so, head downwards, so that for once he be right with the World 'as the World which was turned topsyturvy'. He is buried at Box Hill. )
Top

Hey lady in the pink hat, can you walk a a little slower for the camera please?

Can we get a little more realism with the grief please?

And finally, how about all of these folks in the foreground without a care in the world or any reaction whatsoever to the devastating blast that just happened behind them? Also - have a look at the reflection of individuals on the street in the second story window!

So this story just broke this morning, a manhunt, an attempted carjacking and one of the alleged "terrorists" was killed. The other (his brother) is still alive.

"The younger brother, Dzhokhar, graduated in 2011 from Cambridge Rindge and Latin School, a public high school in Cambridge. He was described as a quiet young man who was on the school wrestling team, said Deana Beaulieu, 20, who attended schools with him since the seventh grade. She said that he lived with his parents, brother and sister at the house on Norfolk Street in Cambridge. “He was really quiet,” she said in an interview. “They always say you have to be careful of the quiet ones.”

Dzhokhar Tsarnaev went to high school in Cambridge and worked as a lifeguard at Harvard University, a friend, Eric Machado, told CNN. “There was no evidence that would lead any of us to believe that he would be capable of this,’’ Machado said in describing Tsarnaev, who typically wore his hat backward as he did in the FBI video."

How was the media able to track down neighbors and friends so quickly to interview them about Dzhokhar? This is so typical. allegoricalfact wrote: She looks as though she is strangling them ? It reminds me of a painting, though I don't know yet which.

It isn't Bosch I don't think, but as with all US soap operas they are all 'cleaned up' versions of a known horror which once touched us to our very core but in the sanitized version, of course, feelings too are sanitized, made comfy and it is only a 'Movie'. Reality is only a Movie. The Lie, That Lie, that ever present Lie. It is all and everything it is God .................... completely topsyturvy.

These are no paintings, Allegoricalfact... but topsy-turvy they are - indeed! I guess we could call them "topsy-turvy computer graphic composites". I find it so very appropriate when the media warns us about "GRAPHIC IMAGERY" whenever they publish such appallingly poor, digitized gore. I don't think I need to add much commentary here - as anyone should be able to figure out for him/herself that these two images are entirely computer-generated and cannot possibly depict any sort of reality.

However, I will highlight a few aspects to consider:
-Since 'rescuer A' is seen in different postures in the two images, we can rule out that the two could have been snapped at the exact same instant. Yet, "the Mystery Man" is seen strolling by in almost the exact same spot.
- Rescuers B, C and D appear to be in the exact same postures.
- Is the black-clad rescuer with the blue cap (V?) missing part of his lower left leg?
- Has "victim N°2" lost one - or two legs?
- No one seems to care about poor Jeff Bauman - yet with two severed legs he should deserve some attention, no? I will now state my conclusions regarding these images of the "Boston Carnage" - and my best guess as to how this psyop was staged/carried out vis-à-vis the real world.

WHAT HAPPENED IN REALITY (a plausible scenario)
A loud yet harmless smoke bomb was detonated by that "LensCrafters" store. A crew of "psyoperatives" immediately created an effective visual diversion (for the - promptly evacuated - crowd in the grandstands across the street) by rushing towards the 'bomb' scene tearing down the barricades and those flags. Another 'crisis-actors' crew, (perhaps with some 'Hollywood-grade' make-up, injuries and bloodstains) exit the "LensCrafters" store and create the visual illusion (for the distant crowd/bystanders) of stricken victims of the blast - by simply throwing themselves down on the pavement behind the hubbub of their barricade-pulling colleagues. Soon, the 'fallen victims' would be surrounded and hidden from public view by 'rescuers' - and whisked off on stretchers and wheelchairs.

WHAT THE MEDIA PRESENTED AS REALITY
As we have now determined beyond reasonable doubt, the image-pool released of this event is nothing but a digital construct crafted in a studio prior to April 15, 2013 - much like the imagery we have of the 9/11 event was crafted prior to September 11, 2001. The imagery would have been pre-planned to resemble (as much as possible) what actually played out in reality in that (most likely controlled / restricted) area. Thus, this Boston event is useful insofar as understanding that such government-backed psyops rely PRIMARILY on forged, computer-generated imagery. It is now high time for the American (and worldwide) public to realize this fundamental fact, which we keep tirelessly exposing at this forum.
Top

So far the Laundry List of crimes committed today by the Terror Brothers in chrono order:

But they were such good kids. Where did they go wrong?

But they were such good kids. Where did they go wrong?

Don't forget that they released the Mercedes owner, but before letting him go they confessed that they were the ones responsible for the bombing.

Open and shut case- No need to arrest these guys, Just shoot em dead.
CNN and other media are now showing the manhunt and continuously stating that they are filming live but with a "5 -second delay". Its not hard to predict that this second suspect will be killed on live television. Fortunately for the public, due to the 5 -second delay, the media will be able to protect the viewingpublic from actual seeing very much graphic/real evidence of the killing.