If NASA faked the moon landings, does the agency have any credibility at all? Was the Space Shuttle program also a hoax? Is the International Space Station another one? Do not dismiss these hypotheses offhand. Check out our wider NASA research and make up your own mind about it all.
Post Reply
First unread post • 314 posts

anonjedi2 wrote:A friend of mine sent this to me yesterday and I thought the fine folks here at Cluesforum (especially you, Simon!) would appreciate this in all of its comedic glory.

Although it appears to be an amazing discovery (also it's very easy to understand... I, for one, appreciate that & I'm certain neutral readers will) it doesn't seem to be quite up to an appropriate "Cluesforum standard".

Is there a way you can build on this thing further anonjedi2?

A search for the original NASA image (appropriately linked) would be my first port of call. I suppose correcting the abysmal grammar would be second.

I like what your friend has found. Heck I think it could be great... but let's try & make it even better.
Top

Sure thing, Critical Mass. Here is the link to the video posted on NASA's website. You can pause at about 28 seconds when Australia comes into view.

anonjedi2 wrote:Here is the link to the video posted on NASA's website. You can pause at about 28 seconds when Australia comes into view.

Thanks Anonjedi2... additionally on the same page there is a large (2.6mb) jpeg of the same imagery.

The whole area looks devoid of "civilization" to me.

I think we may have definite proof of a fraud here.. additionally there is no way one could allege this to be due to a "compositing error".
Top

ICfreely wrote:Word on the street is, there's a revolutionary spaceship currently en route to one of Jupiter's moons (which GG discovered) in search of our evolutionary origins.
http://cluesforum.info/viewtopic.php?f= ... 5#p2395366

"We're there — we're in orbit," Bolton said, as applause erupted throughout the briefing room at JPL. "We conquered Jupiter!"
http://www.space.com/33347-juno-team-ce ... ccess.html

Sure you did, Bolty! To their credit, they're at least 'being somewhat honest' in their description of their 'Jovian feat'...

"The people behind NASA's Juno mission rode a wave of emotions Monday night (July 4) as the spacecraft approached Jupiter and then, after a picture-perfect, 35-minute engine burn, became just the second probe ever to enter orbit around the giant planet."


Yup. 'Picture-perfect' it is. Or more correctly still, 'cartoon-perfect'. The cost of the "Juno mission" (and its "nine science instruments")? Well, $1.1 billion, of course!

Is this meant to be real Simon? How on earth did they manage to get a photograph of the Probe orbiting "Jupiter" ?

And Jupiter is enormous, this cartoon "object" is about 50 million miles away.
Top

Is this meant to be real Simon? How on earth did they manage to get a photograph of the Probe orbiting "Jupiter" ?

And Jupiter is enormous, this cartoon "object" is about 50 million miles away.

That's hilarious! My son asked me the same thing- "dad, who was taking the picture of the satellite?"

"Well son, we aren't supposed to ask questions like that. Of course NASA has super special cameras that rocket parallel to the probe throughout the mission."

And yes I agree with Brianv that Jupiter appears disproportionately large, given that it is supposed to be 50 million miles away from the “satellite.”

Also, this gives space a hazy appearance, and frankly I get a better view of the stars from the Rocky Mountains.
Top

Gotta love this YT comment by "the Sentientmeat" :
"They make it sound like they're sending Bruce Willis and Ben Affleck to Jupiter.﻿"

And here's another great comment which fills me with hope (towards finally finding intelligent life on Earth).
It's by YT user "thelegionary7", a NASA skeptic who - predictably - was accused (by another YT user) of believing that Earth is flat:
"I didn't even say that I thought it was flat lol. What I do know for 100% certainty is that NASA is complete bullshit. A treasonous entity which has stolen billions to produce nothing but fake images created on a computer.﻿"
Top

Regarding the images of Australia at night, I found this page at SpaceInfo.com.au:

They blame fires and lightning for the light.


The extent of the lighting is a results of combining multiple images. Fires and other lights that were detected on one day were integrated into the composite, multi-day picture despite being temporary phenomena. Because different lands burned at different times that the satellite passed over, the cumulative result is the appearance of a massive blaze.

Employees and interns in JPL’s latest marketing video promoting the Mars Opportunity rover appear as uncomfortable to act in front of the camera as we are to watch them.

Opportunity, which touched down on Mars on January 25, 2004, has exceeded its operational life by nearly thirteen years.

Designed to climb 15-degree slopes, rover Opportunity, seemingly running on some form of super red bull-type energy fluid, has successfully driven up slopes of 30-degrees, testifying to the uncanny genius of JPL aerospace engineers whose technological creations appear to outsmart their own creators.

(scroll down for video) If you feel the urgent need to barf when looking at the above picture, you are completely normal. Above pictured JPL engineer Mike Seibert landed his screen-staring space job right after college and has been at it for the past ten and a half years.

…. which begs the question : when do science and ideology become incompatible ? or are they ever compatible ?

Has anyone been following the social media story that NASA has been going "rogue" (assumedly in an attempt to capitalize on the marketing for "Rogue One: A Star Wars Story") in an attempt to dodge something happening in the "new administration" puppet show?

I have a feeling this is a way for NASA to appear legitimate and evolve with the re-skinning of the corrupt shadow government going on with the Trump non-drama.
Top HOUSTON — A soccer ball that was on the ill-fated launch of the space shuttle Challenger has made it to orbit 30 years later, thanks to a shared connection between one of the fallen astronauts and the current commander on the International Space Station.

NASA astronaut Shane Kimbrough, the commander of the station's Expedition 50 crew, posted to Twitter Friday (Feb. 3) a photo of the black and white ball floating in front of the windows in the orbiting laboratory's Cupola. His post came less than a week after the anniversary of the Jan. 28, 1986 Challenger tragedy.

"This ball was on Challenger that fateful day," Kimbrough wrote. "Flown by Ellison Onizuka for his daughter, a soccer player."

I honestly can't fathom how ANYONE can believe this crap!

I honestly can't fathom how ANYONE can believe this crap!

Neither can I. How a pressurized soccer ball can somehow survive the Challenger explosion, magically float about for 30 years simultaneously managing not to explode due to (lack of) air pressure or getting torn to shreds by "space debris" is beyond me.

Cant wait to not see it at the Smithsonian or the local natural science museum!

FYI, here's what happens to an (over-inflated) American football in a vacuum chamber:

0:27 Now this is something of course that NASA would never try...

ICfreely wrote: Neither can I. How a pressurized soccer ball can somehow survive the Challenger explosion, magically float about for 30 years simultaneously managing not to explode due to (lack of) air pressure or getting torn to shreds by "space debris" is beyond me.

Aha - but remember, my friend...the Challenger never made it all the way up into the vacuum of space. That's right: the Challenger (with its crew of 7) allegedly exploded at 9 miles of altitude... 74 seconds after liftoff. 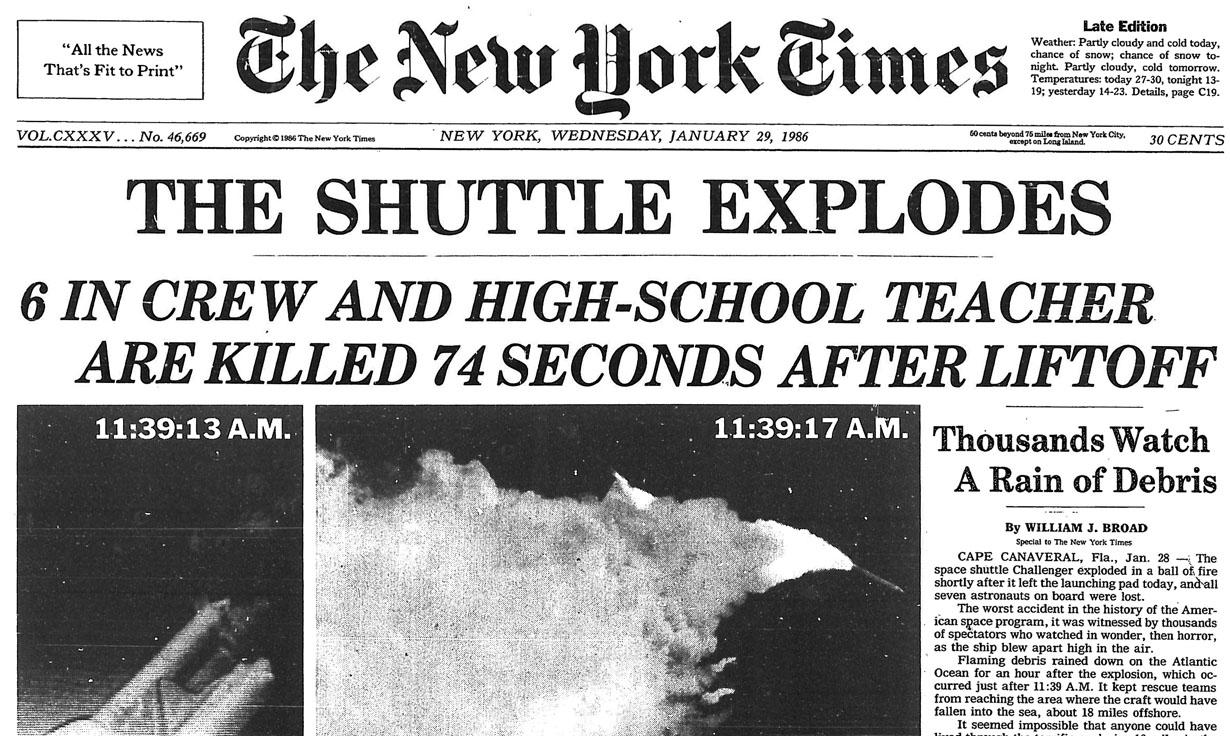 ...and as the debris came raining down, we were told that:
"It kept rescue teams from reaching the area where the craft would have fallen into the sea, about 18 miles offshore".
(see above New York Times front page article)

Now, you may wonder - WHEN exactly did the Challenger (supposedly) take off?
"The liftoff, originally scheduled for 9:38 A. M., was delayed two hours by problems on the ground caused first by a failed fire-protection device and then by ice on the shuttle's ground support structure."
(...)
"At 11:38 A. M. the shuttle rose gracefully off the launching pad, heading in to the sky."
http://www.nytimes.com/learning/general ... /0128.html

From the same NY Times article linked above - we learn that...
"As the explosion occurred, Stephen A. Nesbitt of Mission Control in Houston, apparently looking at his notes and not the explosion on his television monitor, noted that the shuttle's velocity was "2,900 feet per second, altitude 9 nautical miles, downrange distance 7 nautical miles."

The exploded debris - we are told - continued to rise ... up to an altitude of "11 miles (18km)":
"It continued, for a time, on an upward trajectory on a ballistic arc that reached a maximum altitude of around 11 miles (18 km)"
http://www.spacesafetymagazine.com/spac ... hallenger/

Good grief. As much as I dislike to keep pointing out their pathetic "magick-numbers-obsession", I can't help myself from doing so - and it certainly isn't MY obsession!
Top

As for the death at 9 miles article ... it looks weirdly like a deliberate image of a swan. As in ... a swan song? Or yet another way of associating mass media disaster and death with beauty?
Top
Post Reply
314 posts