The "FACT TANK" - and its fearporn report

Historical insights & thoughts about the world we live in - and the social conditioning exerted upon us by past and current propaganda.
Post Reply
First unread post • 4 posts • Page 1 of 1

The "FACT TANK" - and its fearporn report

As I see it, one of this forum top priorities (and one that we are hopefully doing well at) is to uphold what we might proudly call 'a noble and commendable social service': to help people relax and enjoy life to the full - in spite of the silly, relentless and opPRESSive fearporn propagated by the media & military complex on a daily basis. By contrast - and as we all should know by now - one of the Nutwork's top priorities is to keep the world's populace living in a constant state of fear, anguish and distress. The crassness of their antics has long surpassed 'face palm levels' - yet this doesn't stop them from bragging, from time to time, about their 'successes' at terrorizing dumbifying the world.

Just the other day, a report was issued by the "PEW Research Institute" - which made the mainstream news headlines all over the world (including Italy, where I live):

BY JACOB POUSHTER AND DOROTHY MANEVICH
"People around the globe identify ISIS and climate change as the leading threats to national security, according to a new Pew Research Center survey. The survey asked about eight possible threats. While the level and focus of concern varies by region and country, ISIS and climate change clearly emerge as the most frequently cited security risks across the 38 countries polled." 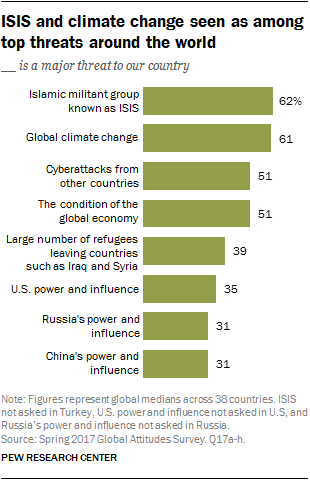 I was curious to find out more about the "PEW Research Institute" - so I consulted the ever-informative Wonkypedia encyclopeedia :

"The Pew Research Center is a nonpartisan American "fact tank", which is based in Washington, D.C. It provides information on social issues, public opinion, and demographic trends shaping the United States and the world. It also conducts public opinion polling, demographic research, media content analysis, and other empirical social science research. The Pew Research Center does not take explicit policy positions, and is a subsidiary of The Pew Charitable Trusts." https://en.wikipedia.org/wiki/Pew_Research_Center

Now, isn't that marvellous? We may all thank this 'non-partisan FACT TANK' for informing us that ISIS and climate change is what people around the world fear the most... Surely, the fact that a 'non-partisan FACT TANK' brings us this international fear-survey should reassure us of the fact is meant to convey the notion that this isn't one of those biased / opinable media opinion polls - but just plain / unadulterated factual facts - no special interests involved!

My curiosity was therefore further aroused: WHO exactly, I wondered, is the chairman of this "PEW" Research Institute?

It turns out to be this busy man, Prof. Michael X Delli Carpini - the Dean of the Annenberg School of Communications at the University of Pennsylvania : Now, get this: aside from his above-mentioned position (and being the chairman of the PEW Institute), Prof. Delli Carpini chairs the "Academy for Citizen Empowerement":

"The Academy for Citizen Empowerment, or ACE, is the educational arm of The Citizens Campaign, chaired by Michael Delli Carpini. Its focus is adult leadership training. The Academy has developed a series of free classes on citizen engagement both online and live at several locations in New Jersey. The "Paths to Service" classes educate citizens on community leadership positions in the "power centers" of government." https://en.wikipedia.org/wiki/The_Citizens_Campaign 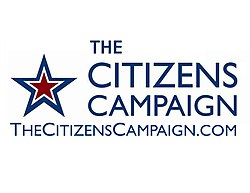 
"The New Jersey Online News Resource Group, formally called the New Jersey Hyperlocal News Association. is a project facilitated by The Citizens Campaign which is dedicated to helping established and emerging hyperlocal news sites build their base, business, and brand, with a particular emphasis on best practices for covering local government and politics."

The coalition, chaired by Michael Delli Carpini, aims to assist hyperlocal editors, reporters, and citizen journalists ensure robust coverage of local government and politics. The Hyperlocal News Association has bi-monthly meetings with the aim of helping reporters, citizen journalists, and bloggers to learn about different aspects of covering local news and government. These meetings often include speakers or panels on important issues such as municipal budgets, political reform, and government transparency. 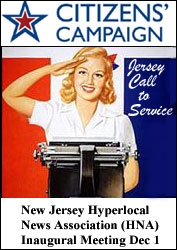 So here we have this quite absurd situation / state of affairs, wherein the man behind the recent international fear-survey (stating that ISIS and climate change are what people fear the most) is - apparently - a staunch advocate for 'government (and media) transparency', 'citizens rights' - and 'educating reporters and citizen journalists to ensure robust coverage of government and politics'!

Now, dear readers, don't get me wrong : my intent here is NOT to 'character-assassinate' Mr. Delli Carpini - or anything of the sort (I'm a far too small / lightweight individual to do so anyway!). On the contrary, my ever-optimistic self hopes that we may, one fine day, communicate in civil fashion with people such as Michael X. Delli Carpini - in order to establish a serious / no-nonsense discourse about the intolerable levels of deception upheld by the MSM - on a daily basis. After all, Mr Delli Carpini went on television - as recently as 2013 (see below video) - airing his concern about the "blurring of news and entertainment", proper ethics in media reporting - and such like :

Doesn't Delli Carpini sound like a good /well-intentioned guy in the above video? How about someone of us (not necessarily myself - but I probably WILL do it if none of our readers volunteer to do it) picking up the phone and asking Mr Delli Carpini these three simple questions (or something along these lines):

- Do you believe that "ISIS" is real ? (in spite of countless citizens buying none of it?)

- Do you believe that "climate change" is real? (in spite of countless citizens buying none of it?)

- If not, how come your PEW institute spews nonsensical surveys about the world's population fearing those two illusory threats? And this, without a single mention of the FACT that millions of people are now questioning the reality of these two alleged 'security issues'?

I think that time has come for action (however futile it may be). We need to start communicating with high-profile 'communication experts' and ask them to clarify how they can possibly fail to see the deceptive nature of government-sponsored propaganda. And especially so with those (such as Professor Delli Carpini) who claim to stand on some higher moral ground, demanding media & governmental transparency, pretending to "educate reporters and citizen journalists" - whilst, at the same time, diffusing monstrosities such as "ISIS or "Climate Change".
Top

If the survey is not an outright fabrication, it merely shows that the mainstream media are doing their job and that the people who have woken up to the ISIS and GW scams are too few to make a difference in a statistic.

The methodology of the survey is described here: http://www.pewresearch.org/methodology/ ... ntry/2017/
I didn´t see any mention of how the survey questions were worded. In any case, it is the kind of "probe" which can be bent and twisted any way you like.

Judging from some of the other topics surveyed and their predictable results, Carpini's "nonpartisan American fact tank" appears to be a mouthpiece of the Clinton social engineering crowd.
Top

Ugh. Welcome to America. We are subjected to these sorts of "polls" and things 24/7/365.25 and it dominates any airwaves about politics, framing the discussion for people. Polls and such have a weird psychological effect on people, too. They often revert to school children mode and begin to try to find the answers that the questioner wants to hear.

Yes, it's part of the same social pressure phenomenon that actually does influence peoples' biases. But nevertheless, Flabbergasted makes a good point that we don't actually get to see the answers.

And why is that? Why don't they publish the exact questions and methodology and the nature of the population sample with every "poll" where they only get 1000 answers and claim it represents billions of people?

So often it seems the questioners can fold their hands behind their deluded pseudo-authoritarian heads and pretend they are just being unbiased and absolutely no social pressure is influencing the answers. It's also interesting how concerns about/for refugees have been contextualized specifically with the words "such as Syria and Iraq". A sign of the times? Or is it more like the New York Times?
Top

hoi.polloi » August 10th, 2017, 9:40 pm wrote: Polls and such have a weird psychological effect on people, too. They often revert to school children mode and begin to try to find the answers that the questioner wants to hear.

Exactly. One main reason so many polls failed to predict Trump's win is many people knew that supporting Trump was shameful, so they lied to the pollsters, saying they supported someone else - and then in the privacy of the voting booth chose the farcical sociopath.
Top
Post Reply
4 posts • Page 1 of 1