Anything on the news and elsewhere in the media with evidence of digital manipulation, bogus story-lines and propaganda
Post Reply
First unread post • 55 posts

Kham wrote:Then I said to myself, what the heck was that? Then I explored it and found that there were three distinct backgrounds.

Technically there appears to be two distinct "background environments" which, as you say, have been made superficially similar... however I'll bear partial responsibility for the use of the "three" as I did mention a "third view".

I won't respond to your psychology "lesson" or whether or not an interview means or implies a single sitting as they seem to invite likely fruitless discussion.

I just hope from now on you'll be more careful with your analyses (and you presumably took some time to make your first jpeg image... and then the second).

As it happens I agree the video is "off" in some manner & I have no idea how the maltreated Hawkings dumb-y is communicating with the interviewer (heck I get the vague impression that Hawkings responses are dubbed onto a separate soundtrack... although it's obviously difficult to confirm).
Top

full link: http://www.youtube.com/watch?v=KxEtofitkuE
At 2m and 10m10s, looks like full control of mouth function doesn't it? Where is his mouth joystick that most humans who are paralyzed from neck down seems to have? That joystick represents their connection to the world, it is their voice, movement and independence. Is it not odd that someone would give up their ability to move around and manipulate things in uncountable ways in favour of a multiple choice system? Are any of the options on that multiple choice system of his "help"? Regardless, his computer could interface with the chair or anything else in the world you could connect a programmable logic controller to (endless limits, automation tech). The "genius" using inefficient technology doesn't ring any alarm bells? If your science god is real, there are signs of abuse. If that's real and you aren't genuinely concerned for his well being, your judgment may be impaired.
However, I should warn you, it's just a bad scam with a shit cover, classic "untouchable" Keyser Soze technique. Except they are also playing with the same emotions that make you protect babies. Power is an illusion created by the believer. Do your homework before you mentally bow down, you may be embarrassed when you find out your lord is latex. Make no bones about it, the jokes on you. (51m27s punchline)

*For tips on how you can build your own "science god", research topic via youtube: "Kuato open your mind"
Top

Stephen Hawking is backing a project to send tiny spacecraft to another star system within a generation. They would travel trillions of miles; far further than any previous craft. A $100m (£70m) research programme to develop the computer chip-sized "starships" was launched by the billionaire Yuri Milner, supported by Facebook founder Mark Zuckerberg.

The concept is to reduce the size of the spacecraft to about the size of a chip used in electronic devices. (I wonder if they will reduce the size of the astronots like in the movie Fantastic Voyage where they shrank the scientists and injected them into the human body?) The idea is to launch a thousand of these mini-spacecraft into the Earth's orbit. Each would have a solar sail. This is like a sail on a boat - but it is pushed along by light rather than the wind. A giant laser on Earth would give each one a powerful push, sending them on their way to reaching 20% of the speed of light.

Pure comedy. The sails/kite-like things with their laser push are illustrated at about the 1:40 mark in the video in the link.

CluedIn wrote:The idea is to launch a thousand of these mini-spacecraft into the Earth's orbit. Each would have a solar sail. This is like a sail on a boat - but it is pushed along by light rather than the wind.

You may be able to spot the spacecraft from the ground [

The group, co-founded by astronomer Carl Sagan, has been working for more than a decade to launch a spacecraft powered by solar sails – ultra-thin sheets of mirrored surfaces designed to capture the momentum from solar energy photons. The small, continuous acceleration allows a spacecraft propelled by solar sails to reach high speeds over time without any fuel.
http://www.cbc.ca/news/technology/bill- ... -1.3104534


No wind. No fuel. Just a post-modern CGI light/mirror show.

CluedIn wrote:A giant laser on Earth would give each one a powerful push, sending them on their way to reaching 20% of the speed of light.


Why not? If a giant laser on Earth can 'prove' we went to the Moon, anything's possible. Maybe someday ULTRA-MEGA-GIANT lasers aimed at the 'lunar reflectors' will keep the Moon from crashing into Earth.
Top

Searching the Cosmos with nothing more than a micro-processor...Fish'n'chips in other words...
Top

Oh, how nicely droll of you. Awesome.
Top

Hawking is a litmus test. War of the Worlds-esque. Belief is a motherfucker to reason & observation. Belief is reality to those who believe. That's the crux. It's ultimately a matter of human behavior and programming. The firewall of programming is a default to labels & name-calling.

The drooling sad man who can't feed himself as astro-physicist who writes books one eye-blink at a time and best-sells them, yet can't take a shit without a nurse maid to clean him up defies all reason. Hawking could "say" anything but the same 9/11 hijack is in place in that the PC programming won't allow the questioning of a wheelchaired retard, no offense to those who are slowed down by their biological limits. And no offense to the victim Hawking. It's a psycho's game.
Top

Goddamn they got some mileage out of this one. Finally dead at 76, or so the Germans would have us believe.

The word "illuminati" thrown into this video as usual makes no sense whatsoever and follows no logic or proof. Still, I particularly liked the part where the caregiver is heard saying: "he's been an important part of my... lie".

In any case it's obvious that Hawking was impersonated by actors or literal puppets.

As for the reason for such a pathetic contrivance, it seems clear to me: Someone who speaks from a computer is like an oracle to the general public, he will never engage in real conversation, which means that his words must be taken as truth without a chance to argue against them. This gives such a person a special added aura, a "sacrificial" (hence the caricature handicap) and persuasive power. This aura is especially useful when wanting to enforce broad ideas like the non-existence of God on the general public.

I wonder why they decided to kill the character now, if it was just about time or is there some other reason? Is the atheist meme being faded out or reinvented, perhaps?

What the heck are those 4 fake little teeth? 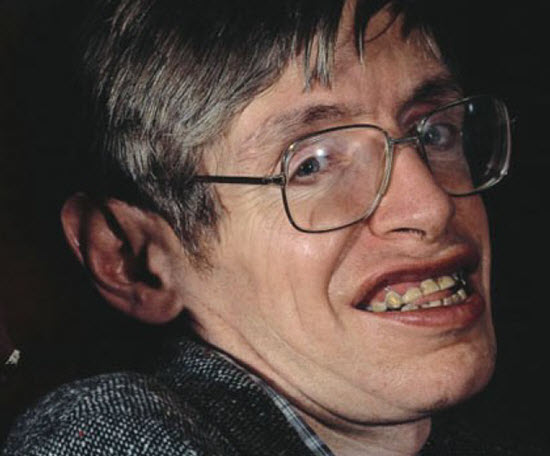 How do they match these?

I also wonder what serious scientists and doctors who have been studying ALS and ALS patients all their life think of this unique case. I mean, many of them must know on some level, from their day to day experience, that a case like Hawking (50 years with ALS) simply isn't possible.

What do they tell, I wonder, to their patients when they have to give them the terrible news of a very short life span coupled with unbelievable suffering, and invariably the patients interject: "b-but... Stephen Hawking!"
Top

Hawking (or whoever has been writing under that pseudonym) famously stated that "philosophy is dead" in the scientistic book "The Great Design", co-authored with Leonard Mlodinow. The central claim of the book is that "because there is a law of gravity, the universe can and will create itself out of nothing".

John Lennox, an Oxford mathematician and Christian apologist, points out three levels of self-contradiction in that claim:

i) The universe is created out of nothing and something at the same time.

ii) If one says "x creates y", one presupposes the existence of "x". Claiming that "x creates x" is utterly nonsensical.

iii) A law of nature, by definition, depends for its own existence on the prior existence of the nature it purports to describe. Moreover, laws and mathematics don´t create things or set things in motion. As C. S. Lewis once said, "one plus one equals two, but when did that ever put two pounds in your pocket?"

Lennox´s purpose in this lecture is not to question Hawking´s official CV, but to show the illogicality of the claims set forth in the book, so hang on through the introduction. It is well worth a listen.
https://youtu.be/6eHfhbP1K_4?t=238 (@ 4:00)