Discussing the most relevant "sequels" or "reminders" of 9/11. The so-called "War On Terror" is a global scam finalized to manipulate this world's population with crass fear-mongering tactics designed to scare you shitless.
Post Reply
First unread post • 301 posts 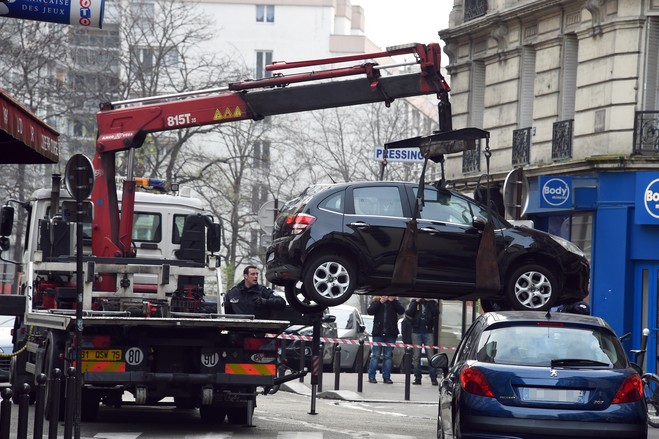 See the way the light is falling on the car? It's almost exactly the same in both shots. Impossiblé. The highlights were picked out by a Professional Agency Photographer. The hubs are perfectly aligned alá TV advertising.

These events are, in part, a new insidious form of Advertising. I'm sure of it! See the new Citroen Charlie Hebdo!

edit/ The hubs are annoying me. It's too arranged. Have they used complimentary angles to make the car more photogenic? I read once about 17 degress being the most eye-catching! Lets see. Perhaps too it's the Pentagonish nature of the five circles, almost Kabbalistic. 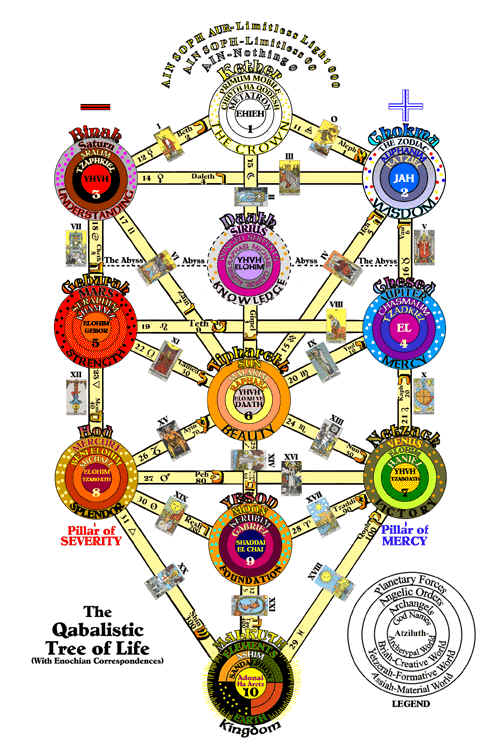 Well I had a look and it appears to be about 17 degrees. edit again/ This car has just come out of a Showroom. There is not a speck of dust or a rain-drop stain, no mid-winter city grime to be seen.
It's always fair weather too for these so called "attacks". It's never raining or snowing!! I wonder why?
Top

Totally agree with you, Brianv: a new form of product placement! for LINDT in Australia, for CITROEN in France.
Top

I see Youtube removed the video Starbucked posted of the bloodless “shooting” analysis for “shocking and disgusting content” but an original it was clipped from (first posted by BTO: http://www.cluesforum.info/viewtopic.ph ... 8#p2393118) was removed for “spam, scams, and commercially deceptive content.”

They haven’t touched the Italian upload of it yet:

So there are still “suspects” at large wreaking havoc, huh?

Meanwhile, the suspects in Wednesday's massacre are holed up in a printing company in a town northeast of Paris, taking one male employee hostage, said Audrey Taupenas, a spokeswoman for Dammartin-en-Goele City Hall.
http://abcnews.go.com/International/ope ... d=28105639
French police revealed Friday that there was a "connection" between the fatal shooting of a policewoman in southern Paris and the massacre at Charlie Hebdo magazine in the heart of the French capital.
http://www.france24.com/en/20150109-par ... sm-france/

I figured they would be adding more dramas to drag it out as “1 dead, 2 in custody” obviously wasn't juicy enough:

Update: “French Media: Second gunman in Paris supermarket was male and has escaped”
You do not have the required permissions to view the files attached to this post.
Top

So, judging by the spin-off ending at the "Hyper Cacher", this story is "kosher" I guess...

coincidentally, this is journalist Laurant Leger going to work after the attack. He was present during the attack and survived by hiding behind a desk: 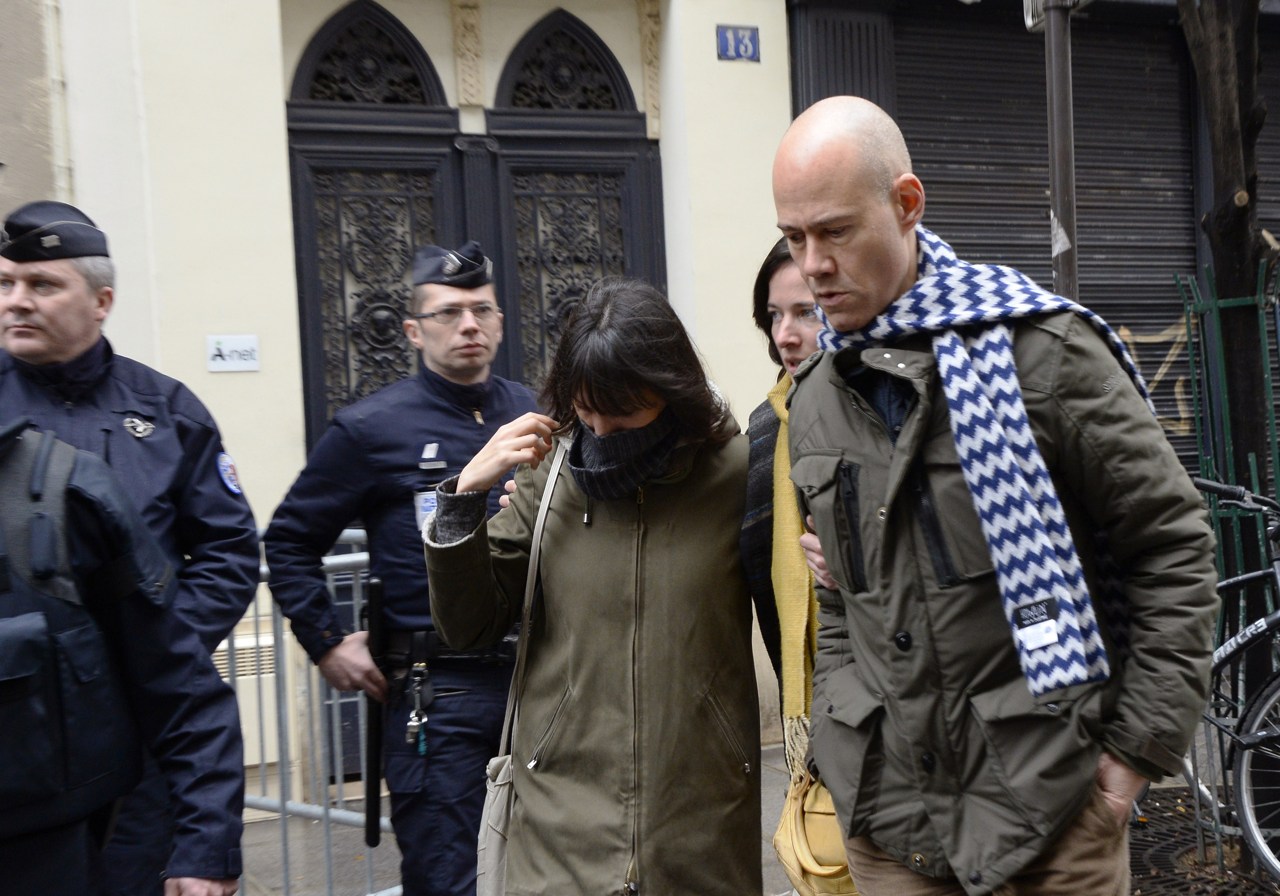 His scarf totally does NOT remind me by absolute coincidence of the flag of Israel.

"Wednesday’s terror attack in Paris brings to mind so much cruelty – human cruelty – so much terrorism, both isolated [incidents of] terrorism and state terrorism . . . of how much cruelty is man capable."

(probably this speech can be found in its entirety somewhere on the vatican website). No matter what you think of it, you cannot miss the roundabout way by which he seems to be trying to pass a message.

Are we here in the presence of actual "fronts" facing each other with different strategies...? Of course, it is easy to argue that this is all the same "front" just playing parts, or that all these part are equally evil. Personally I don't have an answer and I don't envy who does (and of course a case could be made as to the shady affiliations of this freemason pope.) Still, it is worth mentioning. I first had the feeling of someone trying to "ruin it" when I read that on the same day of the attack Pope Francis was meeting with the french Imams, later giving a joint statement together with them (http://news.yahoo.com/pope-celebrates-m ... 24780.html). Although one could argue that this doesn't "ruin" much, or that it is even part of the same psyop, it seems to me still not very much in line with the program of playing christians and muslism against each other that has being going on for decades and especially in the last few years.
Top

It does appear that not only Les Terribles got their car detailed. The bleu Peugeot shares the prize for the cleanest cars in France! Magnifique!
Top

Cue the blue and white stripes! I daresay that any speech made by a clown in a fish-hat is not likely to be his own words! Those words suggest that an event took place. Also "Hyper Cacher" -- Caché = a Hidden Reserve, as in arms cache.
Top

You can do a bingo with these terror psyops, such is their level of standardization:

brianv wrote:Cue the blue and white stripes! I daresay that any speech made by a clown in a fish-hat is not likely to be his own words! Those words suggest that an event took place. Also "Hyper Cacher" -- Caché = a Hidden Reserve, as in arms cache.

You beat me to it! The blue and white stripes are baaaaack! It almost looks like the price tag is still attached to the scarf?
Top

brianv wrote:I daresay that any speech made by a clown in a fish-hat is not likely to be his own words! Those words suggest that an event took place. Also "Hyper Cacher" -- Caché = a Hidden Reserve, as in arms cache.

I can't speculate where the words come from, but I find it rather peculiar for this high authority to talk about "state terrorism" on such an occasion. It seems off-script. Perhaps the vatican is now to be enrolled with the "conspiracy theorists" of the false opposition, which is strange but I guess not impossible.

About the Hyper Cacher, according to the news this is a Kosher supermarket, where 4 innocent victims also apparently need to be counted, so that there be no confusion as to where in this fantasy tribal world the innocent and the guilty are.
Top

Pictures of the aftermath at Charlie Hebdo:

I am not an expert but I should probably gasp at seeing such a perfectly untouched chair, on top of such a big pool of blood.

Although, the same seems to be happening in the other room too so it must be normal.

You will also notice that there still seems to be at least one body in the second room. But none in the first one with the magic blood pool.

body.jpg
You do not have the required permissions to view the files attached to this post.
Top

And only 2 shell cases?

Isn't there something odd about the police releasing photographs of the crime-scene? Should not all this stuff should be "sub-judice" until the trial? Of course there won't be any REAL trial. Oh, but it has taken place already in the media. Possibly one token cgi "terrorist" will be tried via court video link like we saw at the Breivik joke.

It is a picture of a body of a Victim (Vicsim?) with number 2 printed on his head...

France-PsyOp-Charlie Hebdo-vicsim.jpg
You do not have the required permissions to view the files attached to this post.
Last edited by Maat on Fri Jan 09, 2015 9:25 pm, edited 1 time in total.
Reason: Attached image
Top
Post Reply
301 posts