The most common objection people have to our research: "Too many people would have been involved to pull off such a massive hoax." Well, with trillions of taxpayers' dollars at hand, this operation could certainly afford contracting many individuals (under a gag order and on a need-to-know basis). Meet the real - and unreal - persons, companies & entities assigned to carry out this gigantic, media & military-assisted psyop.
Post Reply
First unread post • 28 posts

It is high time to start listing the traitors aiding and abetting the GRAND 9/11 HOAX by contributing to its steady and relentless diffusion. The aim has always been to imprint AND uphold in the public's mind a substitute visual and narrational picture of what happened during those infamous 102 minutes "which changed the world".

It should now be common knowledge that the LIVE 9/11 broadcasts as aired by the major US TV networks were computer animated. It is of course an established fact that ABC, FOX, CNN, CBS, NBC were the prime promoters of the fake 9/11 imagery and the main force behind the diffusion of the audio/video-based hoax.

What may not be fully appreciated yet is the crucial use of inconspicuous internet 'terror-sells' to help sustain this visual 'magician's trick' over time. To be sure, the TV networks have issued statements to the tune that "the public has had enough of those terrible 9/11 images, so we will phase them out of our programming"... This has, of course, not quite been the case: still today, much 9/11-related trash keeps being aired on TV on a regular basis. However, the main outlet of the ongoing 9/11 propaganda has now become the internet. One cannot fail to see how many efforts are being made to release "new footage & hot info" of the 9/11 events - through apparent "citizen outlets" such as private blogs, websites, Youtube channels and the like.

This thread is therefore dedicated to single out the internet outlets promoting the 9/11 hoax - be it through fake imagery or bogus narratives.

Please contribute, out of your own knowledge and experience, to this listing of traitors of the truth. Thanks for your time and efforts.
http://www.septemberclues.info
Top

I'll start off this 'Fakery Factory' listing with my own contribution. It concerns a few Youtube channels which I believe have an instrumental role in diffusing the counterfeit imagery - under the cover of apparent "private accounts". They all feature large archives of 9/11 video clips, presenting them as real, legit footage :

a few galleries of "photographs":

By GOD Simon - it seems there are too many to name. They've been at it for 9 years - not to mention the backstopping of 9/11 with sites (that sometimes don't exist anymore!).

Well, let's get started ... here's one of my all time favorites because we were the first to call out Judy Wood back at 911movement:

and then - the heroic Fred og Frihed vicsim-hugger (and Bush-hugger! ::shudder::) who arranged the pho[ny]tographs in such a genius way that we realized the victims were fake!!

I want to add two names of supposed video amateurs. They have one dedicated folder each in the NIST cumulus collection (along with many others that maybe will be featured here in the future).

One is Mark Molesworth. He works in movies. His videos, as presented in the NIST cumulus collection, show "Edna Cintron" waving from the tower.
Over the years he worked on four different 9/11 documentaries as "cinematographer" and/or "camera operator".
Here is his facebook page: http://www.facebook.com/profile.php?id=713937615
here is his IMDB page: http://www.imdb.com/name/nm1086151/
here is his company page: http://www.molesworth.com/mark.html

The other is Mark Trottenberg. He works in movies. His videos, as presented in the NIST cumulus collection, are the garbage known as the "glass man" video, --too bad all the incredibly flawed parts exposed by Simon are conveniently absent from the Trottenberg files in the NIST collection.
He also worked on one 9/11 documentary as "additional camera".
Here is his facebook page: http://www.facebook.com/profile.php?id=686084450
here is the IMDB page: http://www.imdb.com/name/nm0873680/
One funny thing about Trottenberg?
His birthday is September 11th

And another funny thing?
Mark Molesworth and Mark Trottenberg are "friends" over Facebook.

* yes I asked Molesworth and Trottenberg to become my "friends" over FB using my "Joe vicsim" profile. They are stalling and I don't know why :D
** If I should venture a guess, Molesworth is a real person, not so Trottenberg. But the latter could be an alias for the former.
Top


"The focus from the media has primarily been on the destruction of the two gleaming twin towers of the World Trade Center. This site was created to provide a forum for the survivors and families of victims from the "forgotten" Marriott building which was also destroyed".

Try reading (if you can bear it) some of the "survivors stories" - such as Denise Campbell's, who ran out of the hotel and around the "fuming/flaming" NYC in her pajama the whole morning...
http://www.sept11marriottsurvivors.org/ ... seCampbell

And here's their priceless, never-seen-before reconstruction of the "plane" paths...

According to this slick graphic, the two airplanes struck the EAST and WEST sides of the towers! 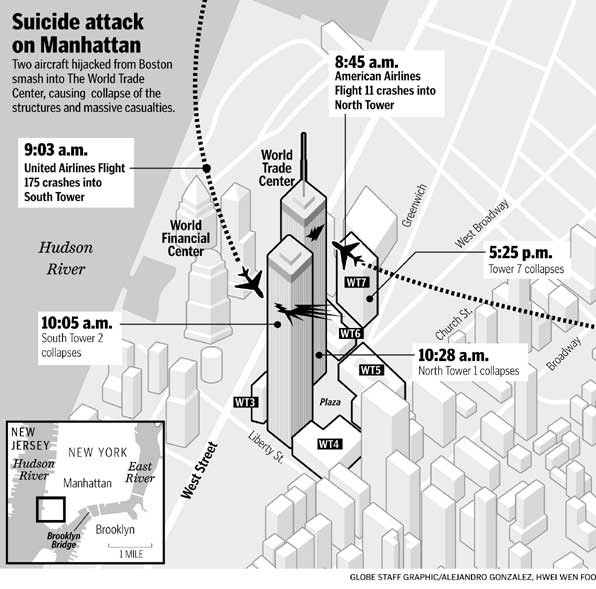 I have one: YouTuber "FreedumbFighter28"

This guy, FreedumbFighter28, shows up late, out of nowhere, and starts uploading 911 stuff like a boss, positioning himself as "a guru". He uploads videos purporting to be extracted from a reluctant gubmint through some FOIA lawsuit, etc.

They ALL push planes and/or bombs in the lobby, etc.

Typical upload: "9/11 Victims Talk About The Bombs In The Lobby"
http://www.youtube.com/watch?v=nTTlIgTuuUw

The media operational chain of command

Remember the utter absurdity of that "59 versus 39 columns" argument at another thread back in July ?

With respect to both the real-time and "after the fact" 9/11 video fakery:

The scale and scope of broadcasting digitized video fakery horizontally across the institutional nodes of the major TV/cable networks (primarily FOX, CNN, ABC and secondarily CBS, MSNBC and PBS) is indicative of a very high degree of coordination and synchronization.

Two things should be obvious from this:

2) The degree of direct control must be highly centralized, in terms of management, technical staff and the broadcast "anchors" whose faces and voices project that script to the mesmerized and benumbed masses.

The latter dismal implication explains the typical first defensive reaction to serious discussion of such massively overwhelming amount of TV fakery (in coordination with the nuts-and-bolts military operational details of 9/11) .. for all its poor quality, casual sloppiness, absurdly inconsistent details ..
which is usually this:

"Why that's one hell of a conspiracy theory !
Don't you realize how many people would have to be in on that ?
Or at least willing to play ball, carry out orders and keep their mouths shut ?"

Charting and documenting such a highly centralized chain of command by faces, names and crimes helps flesh out our picture of what appears as a pyramidal "media matrix" when documented from the bottom up. At some point in the process we have enough detail that we can confirm it from the top down as well. And document it effectively for educational purposes.

That's my ideal ultimate "political" or strategic objective: the identification of specific media perps along with their place in the food chain, who they get paid by (take their orders from) and who they might also direct below them; the otherwise unemployed part-time actors and low-level shills and flunkies.

Wherever possible, active target acquisition means specifically naming the names, showing the faces, placing them in the chain of command.
And spreading the awareness of those "personal details", moving them to the center of the narrative,

The ones who are already famous faces in media just need to be nailed even more.
The ones hanging in the background need to be dragged out in to the open.
The small fry on the food chain (e.g. running smaller scale tax-exempt foundation money scams for cash) should be exposed as a means of smoking out the ones higher-up, progressively up the various levels of the pyramid.
At some point in the process, the entire architecture of lies, with all its interfaces and linkages and relationships, will no longer be a "sparse" matrix. Enough details about specific individuals and their roles will have seeped into popular culture to make the latter uncomfortably "public" and well know.
Top

"Why that's one hell of a conspiracy theory! Don't you realize how many people would have to be in on that?
Or at least willing to play ball, carry out orders and keep their mouths shut ?"

Yeah, that's the main obstacle for thinking persons who haven't bothered to wonder about the slimy news personalities on their TV.

"You mean those bastards are actually lying? To millions? Every day? Nobody can be that unconscionable."

Fox New's Glenn Beck is a Douchebag and considers all conspiracy theorists ignorant dreamers with pea brains, nothing further to add!

Brutal Metal wrote:Fox New's Glenn Beck is a Douchebag and considers all conspiracy theorists ignorant dreamers with pea brains, nothing further to add!

Recently my future mother-in-law tried to make light conversation with me by asking whether I listened to Glenn Beck. I responded that I would rather she jab an icepick in my ear than be forced to listen to anyone on CNN or Fox. She did not like my comment.
Top

fbenario wrote: I responded that I would rather she jab an icepick in my ear than be forced to listen to anyone on CNN or Fox. She did not like my comment.

Oh, you bad boy! I'm sure she had no intention to force you!
Top