It has taken less than 10 years to pry open the can of worms enshrouding the pathetic 9/11 scam. The central role of the major newsmedia corporations to pull off this sordid "terror" simulation has now been comprehensively exposed. Before joining this forum, please get familiar with the research at: http://www.septemberclues.info
Post Reply
First unread post • 512 posts

The FOX archives uses the same imagery as the CNN footage. Yet obviously tampered with it…

Compare the “White out” on fox with the normal “collapse roll” on CNN.

One more close up of both...

More to come on this.

On the Fox Clip the news anchors try to quickly come up with a response for the washout and they tell the public something to the effect "Oh what your seeing isn't live, this was recorded earlier." As if that explains why several buildings just vanished in front of your eyes. Special Camera?

They say it right after you see the buildings vanish off the screen. It always sounded to me at least that group of news anchors sure knew what was really happening.
Top

Brian S Staveley wrote:On the Fox Clip the news anchors try to quickly come up with a response for the washout and they tell the public something to the effect "Oh what your seeing isn't live, this was recorded earlier." As if that explains why several buildings just vanished in front of your eyes. Special Camera?

They say it right after you see the buildings vanish off the screen. It always sounded to me at least that group of news anchors sure knew what was really happening.


that group of news anchors sure knew what was really happening.

The group of news anchors isn’t even sitting in the news room on the morning of 9/11!! Even the stupid Washington DC back drop appears it as evening.
Correct me if I'm wrong… But wouldn’t FOX 5 have their OWN New York anchors reporting. Are they not based in New York?? 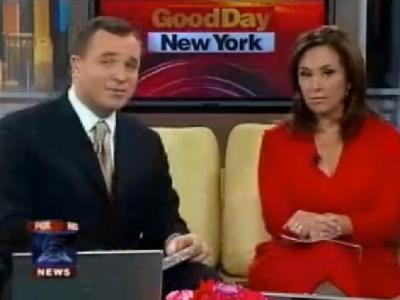 What on earth are we looking at here??

the FOX archives are a complete blunder. The original footage seems too be have been ripped of the archives ( probably because of its dubious nature) And replaced with recycled footage from the other networks.
Now folks ask yourself this.... If there's nothing to hide and the footage is real … Why on earth would Fox rip their own official coverage of one of the world's most epic events on the history of the planet… and then replace it with their rival networks coverage?

Is it because of the Fox Five blunder??

Undeniably, FOX has actively attempted to remove this shot from public view. In fact, shortly after the release of September Clues in June 2007 - the WNYWFox5 video I had found on Youtube (containing the "Nose-Out fiasco") was removed with this 'candid', unambiguous message:

As for the nose-out segment on WNYWFOX5, I have shown in "Foxed Out part2" that, although it is apparently absent in the FOX archives, it has clearly only been 'covered up' - since a few frames of the shot are still to be seen! Or did they get confused about the Lamp- posts… between Japan and foxs so called Live coverage? I want to work on a master post bringing EVERYTHING to do with that camera angle into perspective in the next day or so...

About the "rare" footage shot from a boat

At 0:55 you can see two pieces of "debree" falling but one piece decides to hang around mid air for 2 seconds while the other keeps falling, and then it vanishes and re-appears as he zooms out.

Ok, so I've found the template used for CNN's wondrous ZOOM-IN SHOT of the WTC1 collapse - please see previous page of this thread:

The template is courtesy of Youtube user "femr2" (probably a perp channel):
http://www.youtube.com/watch?v=ca3RJvIaHL8

Here's a gif I made - at 4X speed - from the "RAW"(and bannerless) video uploaded on the "femr2" Youtube channel:

As you can see, it is pretty much exactly what was aired on CNN - minus the long zoom-in motion. The funny moving backdrop (meant to simulate a camera chopper drifting sideways) only makes it sillier than it already is... Besides, are we supposed to believe that TWO camera choppers recorded these two shots? And none of the two choppers captured as much as a glimpse of the other one? Gimme a break!


Moreover, please note that the two distant backdrops do not even match up - yet the foreground buildings (sort of) do!

I will now ask "femr2" where exactly he got that ("RAW") video from. Perhaps from the batch released by NIST in 2010?
I have been blocked from his YT channel for some unfathomable reason - but I have just sent him a PM. Stay tuned!
Top

well I wouldn't be much of a archivist if I could not help here...
( but the way I am going hard out archiving I will up heaps results shortly)


Net is crap right now so I cannot demonstrate with gifs..
But Im sure you can see how they all seem to be from the one spot. As well as chopper 5

Equinox wrote: Or did they get confused about the Lamp- posts… between Japan and foxs so called Live coverage?

Love the harley guy interview. Everything can be explained mostly due to CGI and brain failures

Appearing and disappearing lamposts are ALL over 911 amateur footage, it's truly comical

Mickey wrote:
The missing lamposts are a crackup...! "Mr. HORST's WTC7 close-up":
This is another frame from "Mr. Horst's amateur video" (certainly not recorded with a cellphone camera - as these were not available commercially until 2002). It is meant to be a zoom-in on the WTC7 façade. This is but one example of the dismal quality common to ALL the 9/11 "videos" released to the public prior to 2006. To try and explain away this dreadfully low resolution with "video compression" arguments - or the like - is simply intellectually/technically dishonest: ARCHIVED in the video at the following times.

So here we have to major flaws…. Impossible increasing in size of lamp posts
Disappearing/reappearing lamp posts.

I feel kind of sorry at any one that would try and debunk this. It’s an open and shut case.

Not only are the 9/11 plane shots fake but also the collapse shots and the rest are fake as well. It gets proven time after time. None of the 9/11 footage can be trusted. Full stop.
Top

I think you will all enjoy this interview between Jim Fetzer and
a movie special effects professional who details the demolition software most
probably used in preparations for the 9/11 'real-life' extravaganza.

Unfortunately Two plus Two still equals Five for Jim though

The same also applies to Evelyen, go to the 44 minute mark where she tries to explain how the plane entered the building.
http://nwopodcast.com/fetz/media/jim%20 ... ilbert.mp3

She has her own blog, where she show cases having a pretty good understanding of the world banking system.
http://aotearoaawiderperspective.wordpress.com/

Being an intelligent individual. Why can't she see that 'no planes' hit the towers ?

Also she is a firm believer of the WTC being tennanted as per the official story.
Enjoying being a part of the inner circle of 9/11 truth personalities/ shills, who post on 9/11 blogger, Pilots etc.

We have a LYNN ERTELL (aka the "sai girl") - the entity who told us she went crashing Elizabeth Wainio's memorial pub party. http://cluesforum.info/viewtopic.php?p=2361143#p2361143

Is it just a coincidence that "EVELYN GILBERT" anagrams as "LYN ERTELL"?

To be sure, when Lynn Ertell sent me an e-mail in Dec 2010, she misspelled the name "Evelyn" - for some unfathomable reason...

Is it just a coincidence that "EVELYN GILBERT" anagrams as "LYN ERTELL"?

To be sure, when Lynn Ertell sent me an e-mail in Dec 2010, she misspelled the name "Evelyn" - for some unfathomable reason...

I can remember once listening to 'Sai Girl' when she phoned into a radio program. I once briefly met Evelien Gilbert, no way are they the same person.

The anagram stuff could mean they are part of some net work, but I don't believe them to be working in tandem.
Top

antipodean wrote: I once briefly met Evelien Gilbert, no way are they the same person.


Where did you briefly meet Evelien Gilbert?

And is it Evelyn, Evelyen, or Evelien?
Top
Post Reply
512 posts